YES, IT'S BAD ENOUGH FOR ME... TODAY THE HELICOPTER CHASES MORE HORSES AWAY FROM THAN INTO TRAP. WATCH A SAMPLE...

I'm spent and preparing to get up early to witness the roundup continue but wanted to share a few images and a clip from today to keep us all aware of what is happening across the west to America's wild horses.

Here's some of what I witnessed today.
UPDATED:
Today (Wednesday, January 4, 2012), the last frightened horse forced into the trailer went down just after being loaded.  He was observed immediately, so they backed the trailer up, and we watched people unload all the wild horses and struggle with the downed horse whose leg had gotten caught on something inside. It was pitiful and a bit nerve wracking. You can see in my footage, below,  that after unloading all the horses that had been crammed onto the trailer, they struggled to free his front leg — which had become wedged in the trailer and caused him to go down — and dragged him out.
[As soon as he was freed from the trailer, the crew immediately began flagging him and prodding him to stand.  He laid there,  an  injured prey animal in the presence of numerous predators, unquestionably thought he was going to die.  They wanted him to get up so they could reload the trailer with the horses and assess his condition.  The right thing to do would have been to remove as much pressure as possible from this frightened, injured horse by having all extraneous people step back as much as safely possible, turn their bodies away from staring, have all but absolutely necessary people step way out of range, and let unfortunate horse collect himself and stand up.
Instead, while the BLM COR ("Contracting Officer's Representative," meaning the BLM person in charge on site) and APHIS vet looked on, in efforts to get the horse to rise to his feet, the Sun J crew did a lot of ugly poking and prodding, and actually tied a rope around this poor stallion's neck and yanked on it, causing his face to bang on the trailer as he lay there.  I can't believe the COR and APHIS vet never extended a hand to say, "Hey, wait a minute, don't do that."  Instead, they just stood by watching.  The horse just meekly laid there with what looked to me like a broken spirit and did nothing to protect himself. (UPDATED:  The COR has acknowledged having ordered the hotshot).
It appears very strongly that he was hot-shotted, not only from the wranglers' appearing to pass something to each other, but the way the horse suddenly stands is out of character with how a horse in that situation would finally arise.
(SEE NEW BLOG POST OF JANUARY 14, 2012,  BLM COR MELANIE MARATI ADMITS ORDERING THE HOTSHOTTING OF THE INJURED WILD HORSE DURING CALICO TRI-STATE COMPLEX ROUNDUP)
If they did in fact use a hotshot in this circumstance, there was no life-threatening situation; it was simply for expedience so they could hurry up and load the trailer.  Using a hotshot to see if a horse is well enough to stand because you are too impatient to exercise a modicum of compassion and wait for the animal to rise on his own is disgusting beyond measure.   The BLM COR and APHIS vet are standing right there.  If he was hotshotted as it appears, they went right along with it as did the COR and APHIS vet when the burros were liberally hotshotted repeatedly in front of them.
They got him up, reloaded him and the other horses, and made the trip to temporary holding.  I am reassured every day that he is "a little sore" but "doing fine."
Here is my video from this day (January 4, 2012) on site.

Of course, we the public are not permitted to go to temporary holding except on Saturday, so I had no way to personally see or photograph or videotape (called "documenting") this horse's condition, and am relying solely on representations made by BLM.  This is not acceptable; we will only be able to see the horses captured on Friday since they ship continually to Palomino Valley Center in Sparks, Nevada.
The trap site is moving tomorrow (Thursday, January 5).  Horses continue to be the focus this week. Burros will be rounded up in the following week.
Saw these beauties along the road today.  They are so great, so right.  They animate the land so beautifully and quietly.  I will talk more about the numbers of burros soon.  Must get some sleep.
Keep the faith... 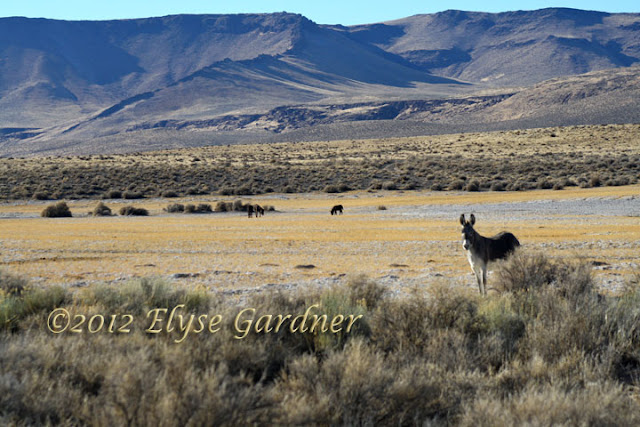 Posted by Humane Observer at 11:30 PM