CALICO ROUNDUP 2012: BURRO ROUNDUP PHASE TO BEGIN AS JUDAS HORSE CALLS IT QUITS AND TRIES TO JOIN HIS ESCAPING WILD KIN AS BLM *COR STEPS UP AND CALLS OFF THE FINAL RUN ON HORSES, WHO GO FREE 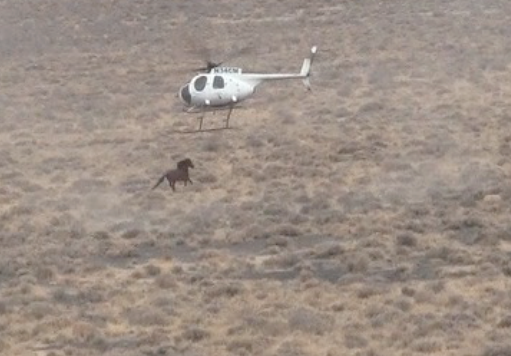 I watched this bravehearted member of the final five horses being rounded up by Sun J twice defy the helicopter until...
©2012 Elyse Gardner 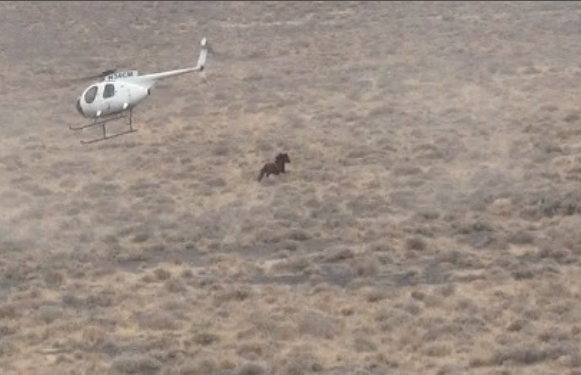 ... he finally is able to escape as the helicopter pilot chooses to continue to try to capture his remaining four friends.
©2012 Elyse Gardner 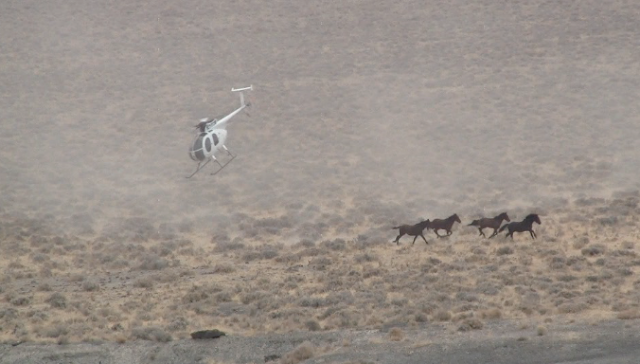 The final four horses embarking on their hard-won freedom as the Sun J helicopter breaks off the chase.
After putting up a determined fight to remain free -- which impressed the Sun J Judas horse so much he tried to quit his job and join them (video soon to come) — the last five wild horses to be chased by the Sun J helicopter retained their freedom today.
©2012 Elyse Gardner 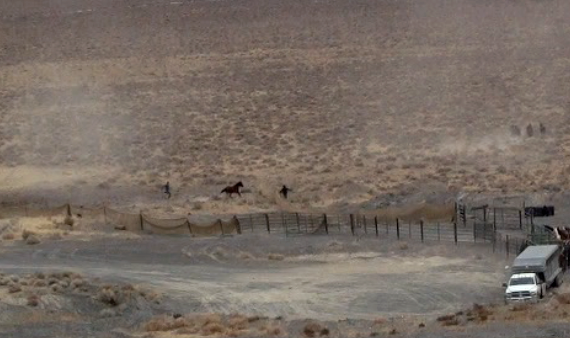 Sun J Judas horse being contained by two wranglers as he makes a break to follow the wild horses.
BLM COR Melanie Mirati called off the final chase after these frightened, freedom loving wild mustangs put up a valiant fight, breaking away from the mouth of the trap and ignoring the Judas horse, refusing to be intimidated into running anywhere near the jute funnel again for a very long six-minute, full-speed face-off with the helicopter. After intense criticism over the previous day's events when the helicopter continued hazing and flying dangerously low at an 11-horse group of wild horses who at least three times failed to follow Sun J's unsuccessful Judas horse into the final trap pen, and which included a compromised stud who stood weakly apart and even flopped down for about 30 seconds while the chaotic, intense helicopter chase ensued all around him, the BLM finally stepped up to do its job and protect these horses from life-threatening harassment. (Video is being prepared and will be coming soon. ) That was one of the ugliest days I've seen in roundups.
I am certain that it didn't hurt any that BLM's Winnemucca District Manager Gene Seidlitz was present at the trap site observation area today.  Mr. Seidlitz, who manages for multiple use and is not a horseman, nevertheless stated he "couldn't watch" the videos of Sun J's handling practices from Triple B, and told this reporter that he made it clear to his staff and the contractor that he does not want those types of practices happening on his watch.
Those words seem to have fallen on deaf ears until today, with his CORs having been passive and nonassertive as hotshotting, overcrowding trailers, and long and fierce low-flying helicopter hazing of horses has persisted during this ugly Calico roundup, while Sun J's characteristic fracturing of bands being run long and hard and lathered up during the chase has continued.
Things have gotten so bad during this roundup that Amy Lueders, the Nevada state lead of BLM's Wild Horse and Burro Program, during Christmas week issued a stern directive to BLM field personnel that the best way to stop horse protection advocates from undermining BLM's roundup policies with video footage of the mistreatment of the animals, thereby making it harder for federal land managers to win the public trust, was to stop abuses when they saw them.  I am saddened that the stated reason for stopping abuses is about saving BLM's image, not about protecting the horses. Nevertheless, I'm all for BLM stopping abuses of wild horses and burros even if it's for self-serving reasons.
District Manager Gene Seidlitz insisted to this reporter that he felt the Sun J contractors had improved, but he's been busy with other matters and hadn't been in the field much, apparently relying on reports from staff.
His presence today was felt by staff.  I observed that the fierce struggle of the wild horses yesterday, including the compromised stallion in the middle of it all, was worse,  continued longer,  and was never called by the COR.  So today's calling off this intense, final face-off between helicopter and wild horses today was a smart move if this District office is to have any credibility.
These five horses have been given a hard-won reprieve since the horse-roundup phase of this Calico Roundup is over, and the helicopter will now be looking for burros.   I am grateful to have been able to be present this last week.  I am grateful that the COR is acting with more leadership.
I am told Burro roundups may start as early as Saturday, January 7.  God willing, I will be there.
Posted by Humane Observer at 11:30 PM