(Photos and videos in this blog are for informational purposes only.  Do not use without express written consent from me.  Feel free to link or cross-post to this blog, however.  Thank you. -Elyse Gardner) 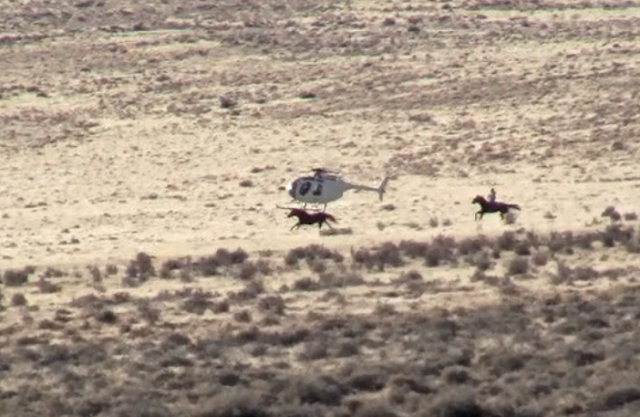 Sun J saddle horse makes valiant effort to escape
Although what you see above looks like helicopter-assisted roping of a wild horse, the fleeing horse is actually Sun J's own saddle horse.
It was around 9:20 a.m. on Monday, January 9, 2012, when we arrived at the trap site.  We'd been driving since 6:40 a.m., and burro roundup operations were already under way.  I was anxious to get out to the observation area and anxious for Roger Oyler to get up to the trap pen to begin his advisory role.
As Mark Wilkening, Roger Oyler, and I were hiking up the dirt road — Mark and I to head out to the observation point, and Roger to head up to the trap pen to advise local BLM and Sun J on the characteristics of burros and how best to round them up -- when we all saw a horse running down the road away from the trap pen out into the vast open spaces.
I was baffled for a moment since burros were targeted on this day (which turned out to be the last day of the roundup since BLM reached its inordinately high goal of  rounding up140 burros).
We all realized almost simultaneously what we were seeing, and as I took off my pack and quickly got out my video camera, Mark stated it:  "That's one of the saddle horses."  Wranglers had already mounted up and were in hot pursuit as I fired up my camera:
This would be humorous if it weren't so sad.  I'd already witnessed and filmed the "Judas horse" try to escape just a few days earlier, and that video will be up shortly (I will put the link here when it is available as well as post it on the blog about the Judas horse).
Roger is BLM's knowledgeable Wild Burro and Horse Program Lead from Arizona. Roger puts the burro before the horse since he specializes in these amazing little animals and, in Arizona, they outnumber the wild horses.  His "official" title is "Wild Horse & Burro Program Lead.  After 20 minutes with him, I am impressed with this man and his knowledge and was glad he was there.
Mark Wilkening is BLM's Public Affairs Officer from Oregon.  Mark and I spent a lot of time together during the Twin Peaks roundup, also.  I was glad to see him again.
After Ginger Kathren's had filmed and publicized the inhumane hotshotting of burros during this roundup, she pressed for remedial action to be taken, and Winnemucca District Manager Gene Seidlitz arranged to have BLM's burro expert from their Yuma, Arizona office, come to oversee and advise the contractors and BLM crew on burros and burro roundups.  We also saw no more of the COR present during that ugly abuse of the burros.
I was also troubled that Gene Seidlitz went back on a commitment and did not wait the one day for Roger to arrive despite having initially arranged to do so, and had gone ahead and started the burro roundup the day before, without Roger.  Hmm.  Sigh.  But the effort was made, and Roger was present at least for the last day, and that's certainly better than a kick in the shins, and I'm certain this entire crew learned something from him they could take with them if they care to.
In terms of remedial actions taken in response to Ginger's eye-opening footage, even though the COR present during the hotshotting of the burros was removed, she was replaced with COR Melani Mirati who finds it acceptable to use a hotshot on an injured horse to make him stand up if he even could — which was unknown at the time — without having given him even five minutes to stand on his own — or even 10 seconds, for that matter.  I will be posting my interview with Melanie Marati where she acknowledges making the call to hotshot the injured stud who went down in the trailer. 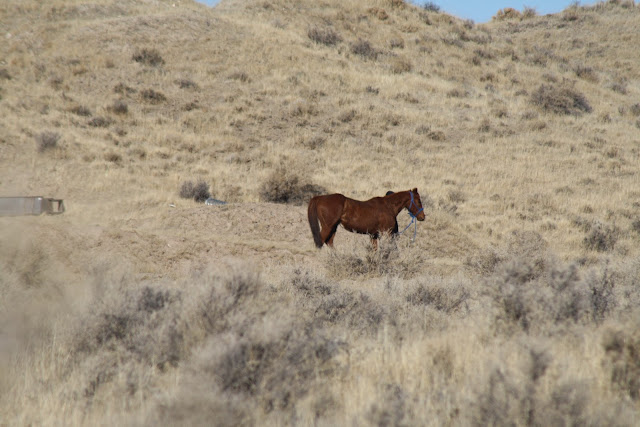 The escape effort was made by this horse, who is one of Sun J's saddle horses.
Here is our saddle horse escape-attempter after being roped and captured.  He sure gave a mighty effort.  Of course, once roped he was quite docile (though I suspect unrepentent).
I have now witnessed two of Sun J's horses — their "Judas" horse, who no longer deserves that name since he tried to quit, and this horse they use as a saddle horse — make determined escape attempts to be free.  I will go into more detail when I get the videos up and posted.
CALICO BURRO ROUNDUP CONCLUDES
CALICO TRI-STATE BURRO NUMBERS REDUCED TO 39 in nearly 600,000 acre complex.
©2012 Elyse Gardner 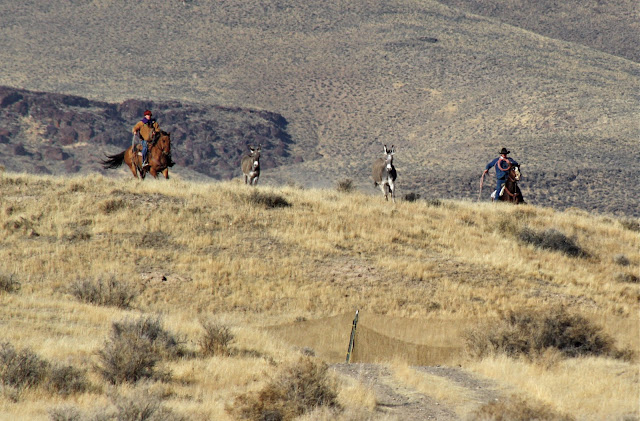 Two of the targeted 140 burros being rounded up and removed from Calico and the "Tri-State Complex"
Yes, that is not a misprint:  39 burros in 600,000 acres.  Sickening.  BLM is looking to reduce the wild burro population to a mere 3,000 in the entire west.  This would be listed as an endangered species were it anything else.
I must check out of this motel and get on the road, but I wanted to be faithful to provide updates to what is occurring in the Calico complex and wild horse program in general.
SOME FINAL COMMENTS
I WANT TO MAKE ONE THING CLEAR:  I am glad BLM called Roger Oyler in to advise on the burro roundup even though they didn't use him at the start.  But this program, BLM's Wild Horse and Burro program, must have an actual Standard Operating Procedure, a legal code to which they can be held to account, e.g.:
There must be a distance certain/mile limit beyond which horses and/or burros may not be chased by helicopter or any other mechanized instrument;
There must be a distance the BLM and contractors can be held to account for, that the helicopter must keep between it and an animal unless an emergency exists, such as guiding an animal away from a ledge;
There must be temperature limits over which roundups must be called/postponed, both for heat and cold;
There must be tighter guidelines on the use of hotshots.
These are just a few of the issues; this list is not complete by any stretch.  But I do have to check out of this motel (yes, I'm in another motel, heading for another holding facility to observe the horses and look to see if a particular black stallion has been captured, since I was precluded from being able to see all the horses coming off the range.)
Leaving these things up to the judgement of those involved isn't sufficient.  The experience and caring, or lack thereof,  of those involved is too variable; the cast of characters changes all the time.   It is time for a legal standard.
This is why the humane case Laura Leigh has filed is so important, and it comes before the Court on January 26, 2012.  Please stay tuned to Wild Horse Education (http://wildhorseeducation.org) for updates on this important litigation.
And if you haven't already done so, I urge you to contact respond to requests from The Cloud Foundation, AWHPC (American Wild Horse Preservation Campaign), Wild Horse Education, and me in terms of letters and calls to various lawmakers and BLM.  The wild horses and burros need our voices.
That's all I have time for right now.  I will be supplementing posts with video and photos and adding new posts and film from this roundup.
I hope to see you along the good trail...
Posted by Humane Observer at 10:50 AM