One year and a day after I photographed Freedom's capture and escape in this same HMA, this brilliant sorrel stud suddenly escaped from just inside the mouth of the trap pen only to turn around and stare and call to his family, who remained captured.  He refused to leave for a long time. 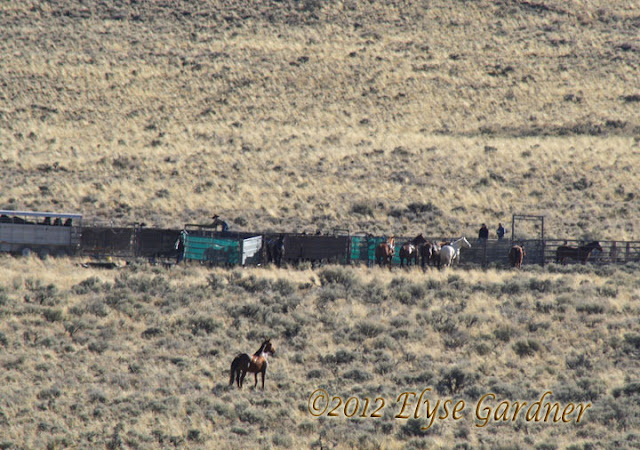 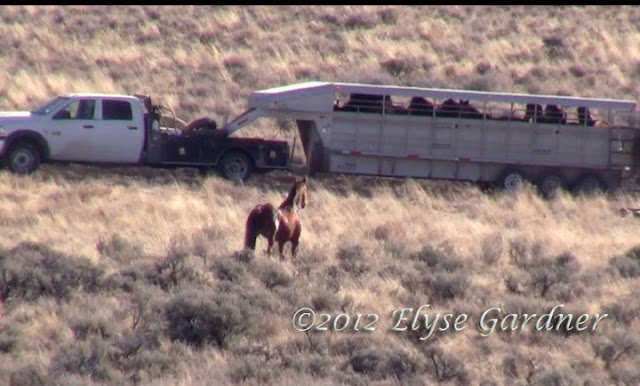 He eventually walked over by the trailer, stood there watching helplessly, calling occasionally to his mare now in the trailer.  He kept starting to leave, then turning around, "Surely there must be something I can do..." 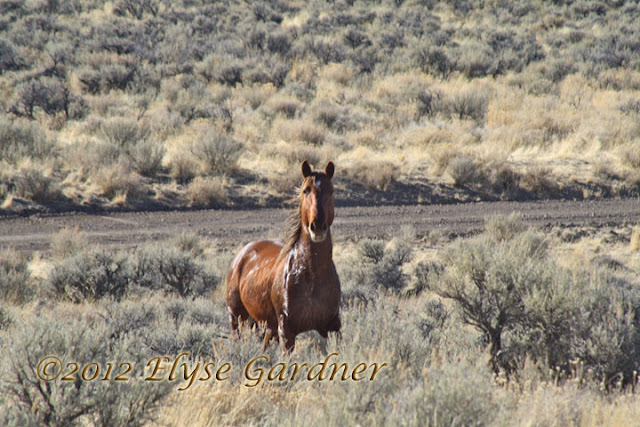 Spotting us, this amazing stallion trotted toward us, approaching to within probably 50 feet of us.  He called to us a few times. It sounds funny, but it genuinely felt like a plea for help.  By the way, that is white foam from excessive lathering.  This horse is drenched with sweat.  Fortunately, it is a beautiful day, temperatures no lower than 45 or even 50.
This was a hard day as I watched band after band fracture before they reached the capture pen.  Many times the Sun J pilot can't seem to keep them together.
Video will be coming... cannot get much done at all except bare bones basics when doing a roundnup.  But it is again evidence of the nature of the close bonds these horses have with their bands.
I am calling him Bond 007 because of his connections both with his family members and other horses, who followed him readily, taking shelter in his skill.  It appeared that, after he finally disappeared into the distant hills, he was once again being chased among a group of 13 horses Josh Helyer, the pilot, was bringing in.  But Bond, this remarkable horse, guided them very adeptly around the mouth of the trap, and they took off running away from the trap.  He refused to be maneuvered by the helicopter, and the other horses followed his lead.  It was exhausting because pilot Josh Helyer would not let up, and the BLM COR did nothing to call him off.   I understand he has a job to do, but we are looking for humane parameters.
What I found very disturbing is  the length of time the pilot chased, hazed, pushed,  this group.  They evaded capture to the point of disappearing out of view after almost going into the trap funnel.  I have never seen anything like it before. I was half expecting horses to collapse from the running.  The BLM COR (Contracting Officer's Representative, i.e.,  the person in charge) did not seem to intervene, certainly not that I saw or heard.  This is the same person who said to me she felt "the longer they're out there the better."  Incredulous, I had asked why?  Her answer, "Then they come in walking."
I drove over 200 miles today, just over 2.5 hours each way.  Not much time to put up a thorough post as I prefer to do.  Must rest, will do my best to keep information coming your way about what I am seeing.   I did manage to put together a snippet of the story of another little wild horse family,  the last run of the day.
Of most concern:  we are barred from seeing the horses at all because temporary holding is on a privately owned ranch, and the rancher does not wish to have the public on his property.  It is my contention that it is BLM's responsibility to include a few members of the public among the necessary BLM entourage at a roundup, period.  I am virtually certain that if BLM was okay with our being there, the private rancher would be, also.
So the upshot is I have no way to determine if Bond was ultimately rounded up today. And I'm virtually certain people would want him if they saw him.  So working with us in this way would help the adoption program.   By Saturday, when I will be allowed into "temporary," today's horses will have been long gone, shipped to Palomino Valley Holding in Sparks, where they have over 1800 horses and where Bond will be immediately assimilated.
I believe that we have a right and responsibility as members of the public to view every horse that comes in, and to see them running wild and free.  Happy new year to all.
Posted by Humane Observer at 4:54 AM