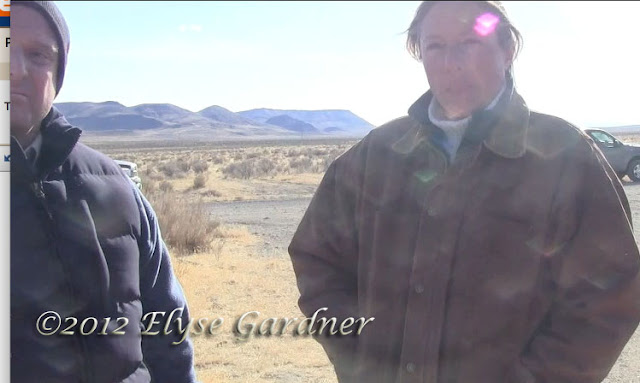 Melanie Mirati, BLM's replacement COR for the Calico Tri-State complex, acknowledges ordering a hotshot be used on an injured, downed horse they struggled for 10 minutes to free from his stuck position in a stock trailer.  A review of my film, below, reveals he got stuck when being packed in like sardines, the last horse forced into an untenable situation, a customary habit among BLM ground personnel and roundup contractors eager to fill up each trailer load for economics.
I've put together my film of the incident, below, so I can walk you through exactly what happened as we saw it.  The brief interview is at the end.
For the tender hearted (that's a lot of us), my rating of this film is G; this film shows people trying to get a horse unstuck and doing unsavory, upsetting things at times, but it isn't graphic or violently upsetting.  You can only see just enough to know what is going on.
For starters, contrary to Ms. Mirati's statement in this brief interview, this horse was given zero time to rest and collect himself before being hotshotted and forced to stand after being down, injured, and stuck in the trailer for 10 long minutes as those he feared most struggled none too gently to free him and then flagged, poked, prodded him relentlessly to stand.  I doubt he even comprehended what was being asked of him.
She refers to the hotshot being an "acceptable" tool for "livestock" management.  That may or may not be the case for domestic horses, who also are not universally agreed to be "livestock," but certainly the 1971 Wild Free-Roaming Horse and Burro Act treats wild horses as anything but livestock and decrees they are living symbols of the historic and pioneer spirit of the American west and are to be treated as an integral part of the natural system of public lands, not treated as livestock.  Additionally, the law states they are to be protected from capture, branding, harassment, and death.  A few minutes here, just a few simple minutes given to this lovely trapped animal who didn't intend to get his foot caught, could make the difference between harassment and compassion, between truly upholding this law and respecting this noble animal, or treating it as livestock, as Ms. Mirati openly admitted she does, whether she recognizes it or not.
It is high time for the members of the Bureau of Land Management to take a personal inventory and reevaluate because Ms. Mirati may well be in violation of the law by treating these animals as livestock, and so would be every member of the elite Bureau of Land Management who does likewise.
Ms. Mirati replaced Ashley Whitman as COR of this Tri-State Complex roundup, who was relieved of her duties after standing by doing nothing while burros were abusively hotshotted when the Sun J crew went into high gear to empty the trap pen for incoming horses rather than tell the pilot to hold off on bringing in more animals, as revealed by Ginger Kathrens' film when she attended the Calico roundup in December 2011.  Candidly, one wonders if Ms. Mirati would have responded any differently. 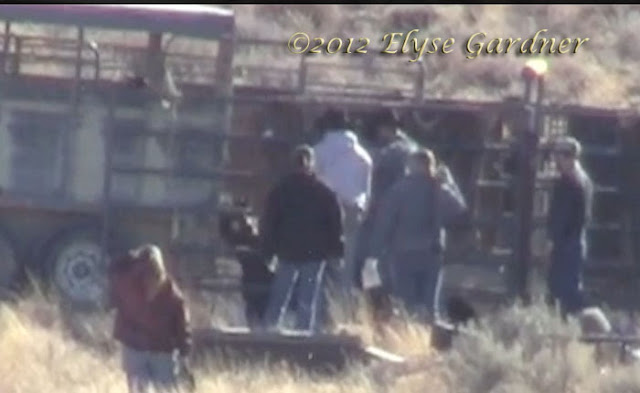 Here this unfortunate stallion, whose injured front leg is finally free from being stuck inside the
trailer, is given no time to calm down, has a rope around his neck and is having his head yanked.
I had reported on this in my previous blog post, Yes, It's Bad Enough for Me, and had posted Laura Leigh's video.  After Melanie confirmed her hot-shotting order, I decided to post my video and walk us through the actual event.
The day Ginger Kathrens filmed the abusive hotshotting of the burros, a BLM internal investigation and report was released which stated that as part of their investigation, animal welfare experts told BLM officials that electrical prods should be used only as a last resort when human or animal safety is in jeopardy.
This situation, with an injured, downed horse who was shutting down, docile, convinced he was going to die, doesn't come close to meeting that criteria.  He endures poking, prodding, pulling, flagging, with a completely subdued, submissive spirit, surrounded by humans he greatly fears, yet there was no fight, no resistance.  Contrary to Ms. Mirati's statement in her brief interview, he was given no time to collect himself and decide to stand on his own.
The crew makes an attempt to hide the use of the hotshot, but the behavior of the horse gave it away, and when confronted with the question, Ms. Mirati admitted she asked for the hotshot to be used on this horse.
Another concern I want to report on:
Farewell to this lovely mare... 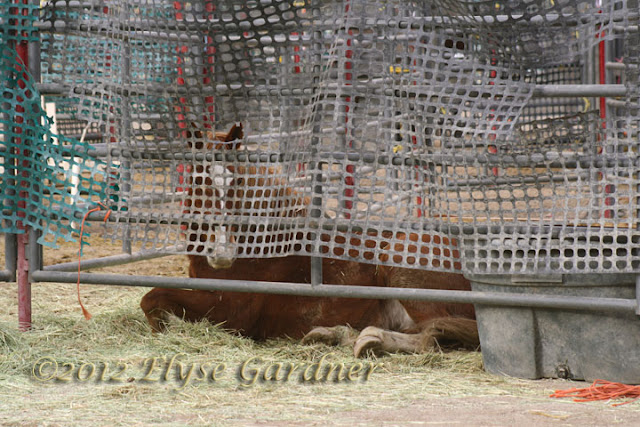 I saw and photographed this lovely mare on the one day the public was permitted to tour the last Temporary Holding area for this 2012 Calico roundup.  She was down, had been given banamine according to Ms. Mirati, and we were to "keep walking" so we didn't upset her.
One has to wonder what goes on behind the scenes.  I was under the distinct impression she was to be given time, like overnight, to improve.  I read in the Gather Updates that she was euthanized later that same day. Perhaps I misunderstood the timeline.  But what concerns me is the manner of her death:
I'm told she was killed by firearm, and I've been trying to learn why this unfortunate young mare, by the looks of her, was forced as her last living act to load into a trailer, obviously feeling very ill and/or in pain, and be driven off alone to be shot when she could have been administered an overdose injection if she in fact needed to be euthanized at all. I am waiting for her necropsy, as well.
But the very worst thing a person can do to these very social, herd animals is isolate them from others of their kind, especially under stressful circumstances like a roundup.  The circumstances of her death haunt me.
I will update as I receive information.
Posted by Humane Observer at 10:00 PM