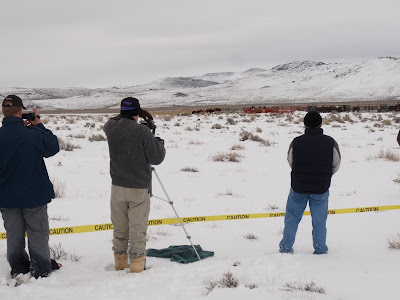 Above is the trap site.  We are looking at -- trying to, anyway-- the newly captured horses being loaded onto trailers to be taken to the temporary holding area. 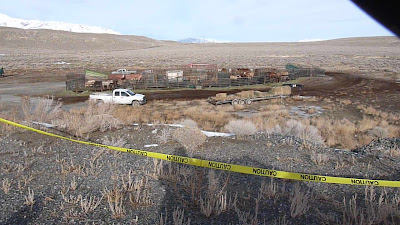 Here is the temporary holding area from our new, distant vantage point behind the yellow tape, I'm estimating 60 to 75 yards away.  Below is the closest I can get via my zoom lens.
©Photography by Elyse Gardner 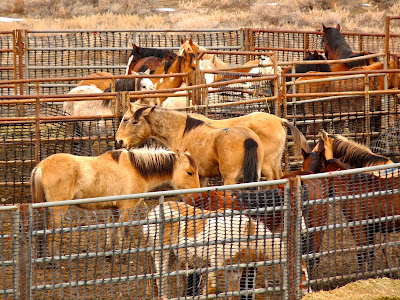 Maximum zoom
Above you see what were some very thirsty horses.  We had over an hour of waiting at this temporary holding area, a lot of time to watch these horses who, curiously, remained in these temporary holding pens.  They had been captured yesterday.
But the huge truck/trailers had been loaded with the horses captured yesterday and had left for Fallon, as usual, before we arrived. We passed them, as always, on the drive in. Why were these horses still here?
©Photographs by Elyse Gardner 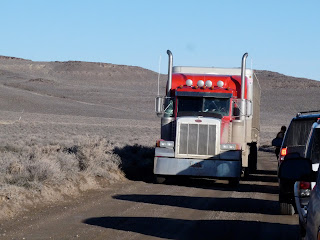 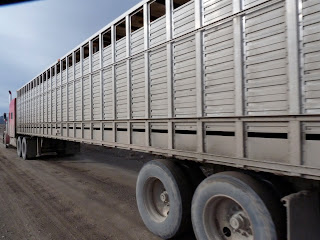 So these approximately 30 horses were left.  Sue Cattoor informed us that they were the last group from yesterday to be rounded up.  These horses had spent Sunday night at the trap site in the trap pens and had -- shortly before we arrived -- just gotten to this temporary holding area where we were seeing them Monday morning. There is no water at the trap pens. 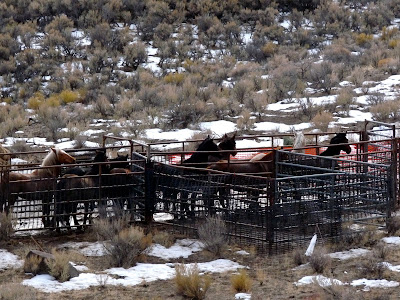 As I hope you can see, the trap pens are narrow, small pens just intended for the initial trapping of the horses and shaped to facilitate the separating of the wild horses back into their individual family bands.  (A "band" consists of one stallion and his mares with their youngsters, and maybe some young stallions up three years old if they've not yet been kicked out by the reigning stallion.)   A band can be one stallion and one mare, or up to one stallion and 10 or more mares, indicating a happy and powerful stallion.


When two or more bands are driven in together, they need to be separated immediately because the stallions will fight to protect their mares from another stallion.  When stallions are together without mares, however, they generally get along fine after what can sometimes be a debate about who's in charge.


These pens also have little areas to separate out the foals from the adult horses.  They are designed to trap, separate, and load the wild horses into the trailers and are not at all intended as overnight accommodations.

Sue Cattoor informed us that yesterday, the weather had turned very mild, and by the afternoon when these horses had been driven in, the ground was so soft and muddy, all the trucks got stuck and could not haul the horses away from the trap site.  She said these horses were fed, spent the night at the trap, and in the morning if the ground hadn't hardened up enough, they were going to release them. But the ground was hard in the morning, so they were brought here where we were looking at them.  I asked if they were given water.  She said no, no water.  But they were given hay.
The horses having the conversation in the video below are stallions.  The mares are in the foreground pen.  Foals are out of sight, but they are in a pen way off to the left, separated from the mares and stallions by at least one empty pen.


An investigator from Last Chance for Animals was there observing.  He asked about this.  Sue Cattoor assured him that a study shows horses can go 24 hours without food or water without showing negative effects.
Consider:  These horses had last had a drink sometime before hearing the ominous drone of two helicopters that were about to take them for the run of their lives.  Their adrenalin starts pumping, and they start to try to lose the helicopter(s).  For miles.  The day they were rounded up was not a public observation day.  Even if it were, we have no idea how far these horses start out from the trap.  So assume they tried to outpace the helicopter(s) for anywhere from 3 to 10 miles.
Then consider that they are very thirsty, breathing hard.  (We don't know how hard they're breathing because we are never permitted close enough to document this; in the Pryor Mountains after an 11-mile or more run, it was 135 respirations per minute a full 35 minutes after they were caught; normal is 8 to 20 respirations per minute.)
Stressed, thirsty, and exhausted, then they are fed hay, a completely new and far richer food than any they have encountered since the summer.  Consider that at the Fallon holding facility, horses continue to be "found dead" several times a week, and the most common cause is attributed by the vet to "failure to adjust to dietary change."
So these wild horses have just been given a real prescription for colic, or "failure to adjust to dietary change."
Imagine the sled dogs at the Iditarod, or even your own dog(s), running for one to two hours, then given no water for the next 16 to 18 hours but given alien food.
Why is it all right to do this to horses?  If it were any other animal, groups would be shouting "animal cruelty,"  "criminal neglect."  And so it is.  We will endeavor to follow these horses as they now live in Fallon and hope they make a smooth adjustment after what surely was a very unpleasant start to their captivity.  Unfortunately, there are no identification tags or marks on them to make them easily identifiable.  But we do have plenty of photographs and video of these individuals, so we will be following up.

THE DAY'S ROUNDUP
Relocation of the trap site to Granite Range today.
BLM has restricted public observation viewing access even further at the temporary holding areas and at the actual trap site (see above). These restrictions were initiated by the contractors.  There is yellow "caution" tape strung in a perimeter 50 yards or more away from the temporary holding pens, making it impossible for me -- or anyone -- to see the horses in any kind of real detail without binoculars or to take reasonably detailed documentary photographs.
I will not for now address precipatory events, only just to say that our continued, unabated interest and presence seem to have resulted in decreased access. Up to this point, Winnemucca on-site BLM staff -- Gene Seidlitz and Lisa Ross -- had at our request from time to time asked the contractor to allow us closer access. They have now been told all negotiations for closer access are to cease.


We climbed hard in deep snow to find a way to see the horses coming in.  The topography of the sites selected for us by the contractor the last two times have only allowed us to see the horses being pressured into the traps in the last 100 yards or so.  We were able to hike about 20 minutes in the snow, up the side of a tall hill (mountain!), so I was able to shoot this film.  BLM staff and public observers all got a real workout getting up there. 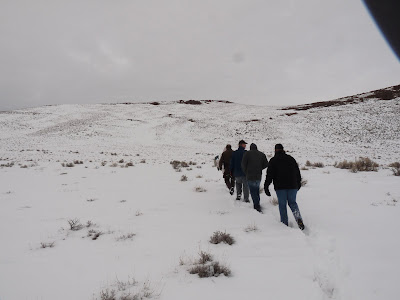 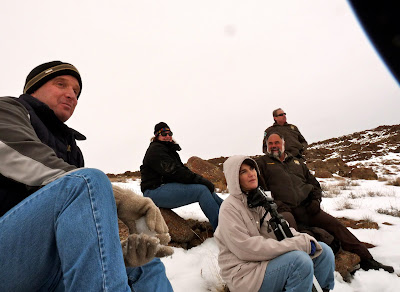 Two helicopters were working these horses, who were pretty spent by the time my camera and I picked them up.  If you watch carefully, you can see where they turn right, heading toward the camera, and enter a pretty solidly white area, lifting their feet higher as they lawnmower through this deeper snow.  We had a long climb to get up to our vantage point for this film, and a lot of the snow we had to traverse was knee deep.  From my personal experience walking through it, that is real exercise and pretty tiring.


It took about 1.5 hours or more for the helicopter to bring the horses in to this point.  Not knowing how fast they were moving, it's hard to know how far they came.  As you can see, the helicopter was hanging back initially, but the horses were still moving very fast.


Video by Elyse Gardner
These horses were gorgeous and healthy.  Again and again, I see how they know how to live in their habitat.  These horses are not even close to starving.  They are well muscled and beautiful.  I am not close enough to document respirations and detailed sweat patterns or easily see leg or other injuries, but I can certainly see muscles and basic conformation.


BLM website tells us a horse was kicked in the eye in the trailer on the way from the trap to the temporary holding area; she was then euthanized at the holding area.  Mystery solved: We were delayed getting back to the temporary holding area -- BLM staff told us we were going back there but then BLM drove us past the entrance and pulled to the side of the road and waited five to ten minutes before bringing us in.  No one explained why.  I didn't know about this until I read it on the website.
I wonder if this is the transparency BLM and President Obama keep talking about, if after-the-fact, spoon-fed information constitutes the President's definition of transparency.


I will continue to do what I can to be your eyes and ears and heart on site.  I hope we can work together  with BLM to truly protect and preserve our wild horses   i n    t h e     w i l d.


For the wild horses in the wild with their humble burro friends,
Elyse Gardner
Posted by Humane Observer at 11:30 PM