26 February 2010: CALICO HAS LOST ITS LIGHTNING - LIGHTNING LOSES ALL

QUESTION:HOW DO YOU MARGINALIZE LIGHTNING?

LIGHTNING of the Calico Mountains
©2009 Photography by Craig Downer 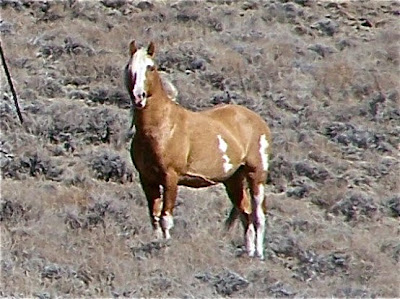 Here is the powerful, charismatic Lightning, who stood watching the two-leggers, confident but alert and protective as he observed the men in his world.
ANSWER: TWO HELICOPTERS, THE BLM, AND $67.5 million. 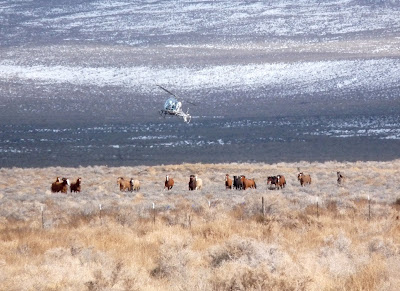 In October 2009, this extraordinary stallion captivated Craig Downer, who was out on a bittersweet trip  visiting the wild horses in the Calico mountains.  Craig named him "Lightning" both for the distinctive markings he bears and for his energy and magnetism.  Lightning pranced, cavorted, and sparred with a visiting Mahogany stallion.

The immense roundup in the five contiguous Herd Management Areas comprising the "Calico Complex" was scheduled to start in two months, with a goal of denuding the mountains of 2700 out of her supposedly 3095 horses.  Like many of us who love these horses, wildlife ecologist Craig Downer wanted to see them living free in the mountains as intended.
Of all the bands and stallions Craig captured on film (the best way to capture a wild horse!), Lightning stood out from the rest. He was extraordinarily beautiful, this king of his mountain:  fit, with bold white lightning spears adorning, sizzling on his lovely form.
Lightning's majesty and aliveness depict a palpable example of equine power and grace.  Being such a compelling presence, this exemplary stallion was featured in a moving YouTube slideshow by Laura Leigh, using Craig Downer's photographs, with a stirring song by Lacy J. Dalton.  It is embedded below, toward the end of this post, courtesy of Laura Leigh.
©2010 Photography by Elyse Gardner 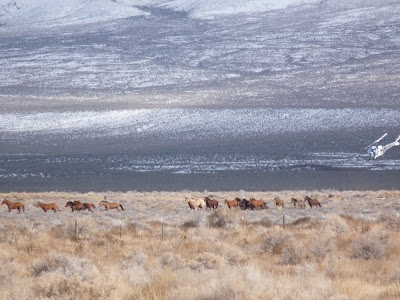 The six-week roundup took its wicked toll, stripping the sparse, wild Nevada mountains of the equine beauties who animated them while enriching the soil and the spirits of all fortunate enough to witness their peaceable presence.
In our disturbing visits to Fallon we had nevertheless been relieved:  we had not seen Lightning at the Fallon holding facility.  Then on Sunday, February 21, 2010, the first official Sunday tour, we were in front of the stallion pens.  Only a few minutes earlier people had been talking with Craig about Lightning.
To my dismay, I heard Craig quietly say, "Oh, there's Lightning.  There he is." My heart sank.  "Craig has got to be wrong," I thought.  The horse had similar markings, but he looked so big... so different.
But there is no mistake.  Lightning has been run off his mountain.
©2010 Photography by Elyse Gardner 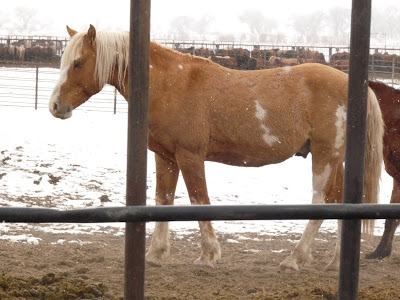 I figured out what was different, what was missing:  his purpose.  The mountains.  We -- humanity -- have deprived him of his purpose.  We have stolen his reason for living.  And only we -- humanity -- can restore it.
The wild horse's power in free movement and his obvious familial bonds are thrilling and display his completeness in his element, fulfilling his reason for being.   Their perfection and presence is riveting; their right to be wild is compelling and ever so obvious when we see wild horses in the wild.   They are fulfilling their purpose, meeting multiple needs -- theirs, ours, the environment's -- in being wild.  It is so missing, palpably absent, when they are just...there...in the holding pens.
That thrill of seeing a wild horse, the excitement and deep satisfaction of watching a band in the wild -- that thrill is gone, replaced with a sense of wrongness, when we look at wild horses in pens.  That feeling of happy wonder we get watching the fabulous "Cloud" movies (see end of post to learn how to view Cloud's movies) , is utterly absent; it is so blatantly missing when they are just...there...in the holding pens. Seeing Cloud in the Britton Springs holding facility, and seeing Conquistador there with tags around his neck, waiting for "adoption" -- like that noble stallion would want to be adopted by the likes of us! -- is one of the most deeply sad things I've ever seen.  What a relief that they are free today.
To the casual city dweller looking at the holding pens at Fallon, what's the big deal?  What's to see?  It's just a bunch of horses crammed into a pen.  Wild, eh? "Looks like any other horse to me."
The world is deprived of a fulfillment, of something spectacular.  We grieve the loss deep in our souls.  Creation itself is offended.  Imagine using the Grand Canyon as a waste dump. Or the oceans as a waste dump...oops, now we're hitting close to home.
The very sight of wild horses in the wild invigorates.
©Photography by Elyse Gardner 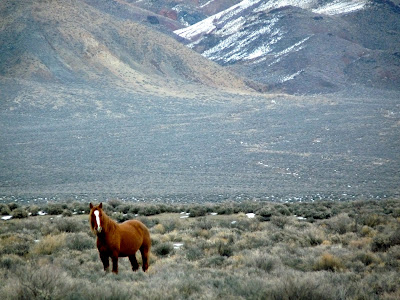 Indeed, wild horses in the wild are a gift, a fulfillment, the sight of which acts as a balm and restores our souls.  The loving wag of a welcoming dog's tail, the purr of a devoted cat, the sight and assured presence of wild horses in the wild are treasures without which we humans would be bereft.  Art in motion, God's 6-dimensional, living, breathing, exquisite art.  And we are changed by beholding this beauty, breathless at the wonder of it.
Like ballet dancer Rudolf Nuryev driving a bus;  like lions in cages.  Like Yo Yo Ma with no cello, no music; Stravinsky sans violin; Dolly Parton and Johnny Cash with no guitar; Diana Krall with no blues or piano (she was MADE to sing the blues).  When we see anyone, be it person or animal or plant, fulfilling its intended purpose, there is a deeply edifying satisfaction we feel in our very souls.
Ken Salazar, and the BLM party line, think they can take the wild horse from his home and family and he will still retain his magic.  But they will have removed him from his purpose.  Moving them to pastures and creating entirely nonreproducing herds destroys their social structure and removes them from their purpose.  I've heard them at Advisory Board meetings discuss ideas about gelding the stallions and returning them to the "wild":  well, the only wild thing about that is that we would even give that a second thought.  Wild horses are all about stallions forming and protecting family bands.
Is there nothing sacred?  I suppose there are those who will mock me for that statement, but running this majestic stallion off the mountain -- depriving the mountain of this horse and his family; taking his family from him and him from his family -- has got to be one of the ugliest examples of man's arrogance and coarseness.  It's akin to catching and clipping the wings of our great iconic American eagle and putting him in a cage.
©Photography by Elyse Gardner 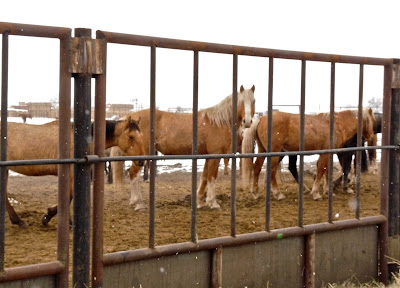 Craig was so quiet about it.  We all were.  Somehow you picture a scene like this as being so much more outwardly dramatic.  But I've learned to be still, to take it in, to put it on my camera, and then to take action, baby.  Get in the solution.
I quietly grieved afresh the magnitude of BLM's colossal sweep, vacuuming up these healing, reseeding animals who break through ice so they and other, smaller animals can drink, paw through snow so they and other species can eat, consume dead, dry grasses, greatly reducing fire danger.
The grief multiplied as time went on.  I've noticed that about this work I do:  it hurts more, not less, fueling my determination to work diligently and purposefully for the sake of Lightning and his extended family of horses and burros.   We can do this together. 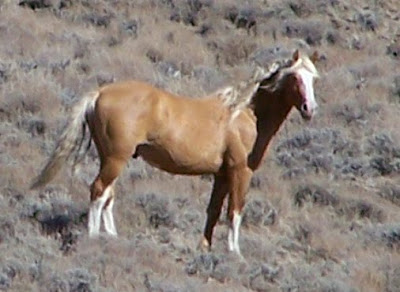 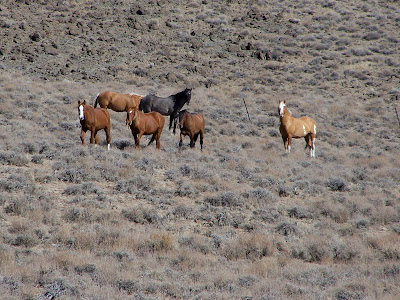 (About the video below:  Since BLM only allowed observation of the roundup three days a week, I was not there to see or film when Lightning and his family went through this ordeal.  But this was his herd area, and he very well could have, and probably did, run the course you see here.  The still photos at the conclusion include photos from a couple of  the Calico HMAs, not only this running herd.  --EG)
Video by Elyse Gardner
©2010 Photography by Elyse Gardner 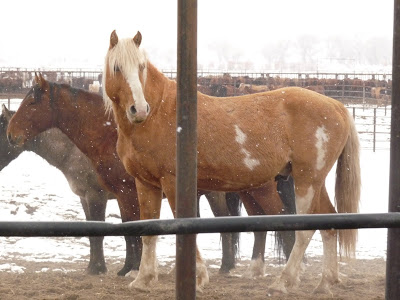 Two stallions died on Saturday, February 27.  Why?  Where?  Horses continue to die almost daily at Fallon.   Many are still not adjusting to the feed.  I continue to respond to all action alerts and call upon my senators to tell them I am opposed to Secretary Salazar's plan and asking them not to fund it.  I hope you will do likewise and give Lightning and his band a voice.
*   To view the "Cloud" films, here's the PBS link:  http://www.pbs.org/wnet/nature/category/episodes/by-animal/horse/
The first one is Cloud, Wild Stallion of the Rockies; 2) Cloud's Legacy: The Wild Stallion Returns; and 3) Cloud, Challenge of the Stallions
Give yourself a treat -- and you can invite family and friends if you like; there are no terrible scary things -- and watch these amazing horses.  Ginger Kathrens has woven together hundreds of hours of topnotch film, and narrates these extraordinary documentaries on this famous herd.
DVDs of these Emmy-winning series, which have extra material on them -- can be ordered directly from The Cloud Foundation.
Posted by Humane Observer at 11:49 PM