v       In the days, weeks, and months after the Calico roundup, I followed carefully two mares belonging to the iconic black stallion Freedom, seeing them at Broken Arrow every week until BLM closed the doors.
©1/2/10 by Craig Downer 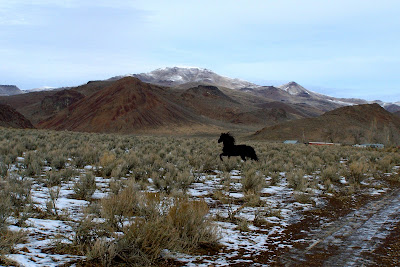 Freedom making his escape, having just cleared a 6-foot fence
and crashed through a 3-strand barbed wire fence...
©5/2/10  Elyse Gardner 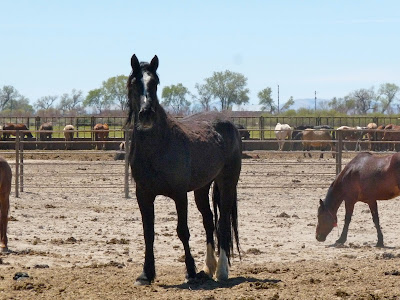 Dahlia, Freedom's lovely, frightened three-year-old mare at Broken Arrow, four months
(to the day)  following her capture.
We rescued them with the help of a precious sister wild horse lover and the stalwart Barbara Clarke, who took them in at DreamCatchers Sanctuary where they are living once again almost as wild horses.  I say "almost" because they don't live with stallions here.  There are stallions; Barbara doesn't geld, but the stallions live on several hundred acres fenced well away from the mares since DreamCatchers does not want to contribute more homeless mustangs into the mix.
Dahlia, Freedom's lovely young mare, lost everything, as the wild horses do, when she was rounded up. This is her introduction; I am working on the video and will tell you her story, as much as I know.  She had a foal; he was taken from her immediately.
I made a commitment to those mares that I would do all I could to see that they would never be separated or subjected to brutality, and thanks to these amazing women, that commitment is kept.  Well, nearly kept.  Dahlia is a particularly wild, frightened girl who clings to River, the older mare.  When first I met her, she could barely stand to be looked at from 25 feet away.
©6/10/10 Elyse Gardner 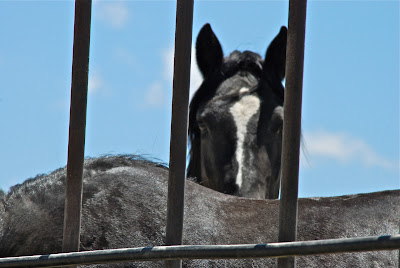 It took us four months to find this timid soul among the 1,900-odd horses at Broken Arrow.  These girls were so spooked, they hid way in the back of the pens.  Here she is in her usual position -- taking refuge behind River. 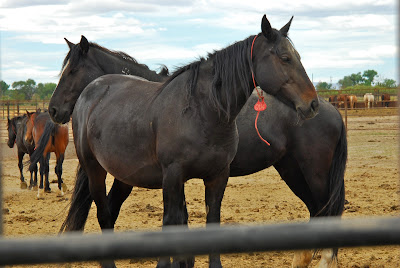 Dahlia and River, her surrogate mother.  I thought River was pregnant.
BLM said no, she's just an older mare, and they look that way...
One of Freedom's mares, River, had a bonus.  BLM thought she was just mature and round (she's 17, and according to them, "they just look like that sometimes after they've had numerous foals).  But alas, she surprised everyone, and right after we had safely adopted her -- she was bought and paid for but not yet picked up -- she gave birth to Freedom's little girl.  I was thrilled. I wasn't bargaining for another horse, but this little filly was royalty; what can I say? -- a legacy, a heritage, a precious family's story to tell, all the sweeter because it continued.
Meet Moonbeam, Freedom's daughter.
©8/30/10 by Elyse Gardner 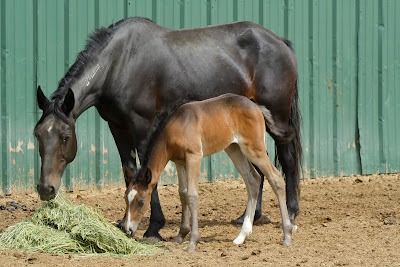 Freedom's little girl here is all of two weeks old, born at Palomino Valley around August 15.  BLM did not note the exact day of her birth, but it was right around 8/15.
©8/30/10 by Elyse Gardner 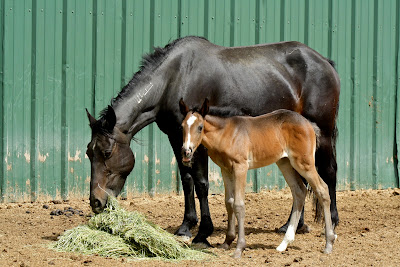 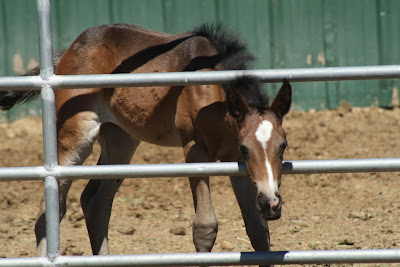 Arrival at DreamCatchers, Moonbeam is all of two weeks old.
I returned to see the Calico girls, as we call them, on September 24.  We had also adopted three other fillies from Calico.  They are quite the close-knit group, and all loved and protected little Moonbeam.
By November 4, when the photo below was taken, Moonbeam had turned completely black except for her blindingly white moonbeam sock on her right rear, and her star and snip.
©11/4/10 Elyse Gardner 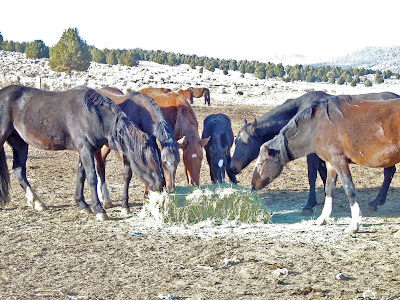 Left to right:  Dahlia, Gemini, Ladybug, Moonbeam (turned all black!), River, Gypsy.
Gypsy, the alpha mare from the Warm Springs area, looks like she is with foal.
©9/24/10 Elyse Gardner 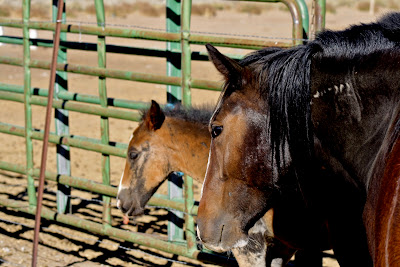 The Process of Turning Black:  Stepping back a few weeks to 9/24, what is happening to this baby?  Oh my; she's turning black like her famous daddy.  Full of black paint splotches...
©9/24/10 Elyse Gardner 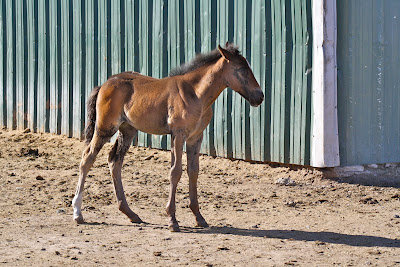 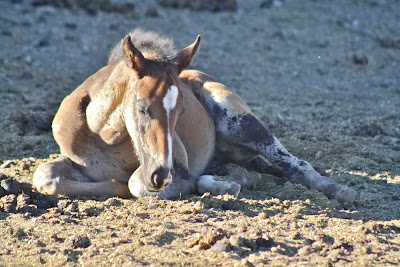 Here is a brief sort of chronicle of this little one.  It's amazing to watch her transformation to becoming her father's and mother's daughter in looks as well as fact.  I'm loving the medium of video more and more...
For Moonbeam...
On Sunday, November 21, 2010, a mountain lion killed a foal at DreamCatchers.  There is no easy way to say this, no easy way to hear it.  The foal was Moonbeam.  My heart is broken, and my knee injury makes me vulnerable, and it hurts all over.  But she got to live without pens.  My Calico girls were taking shelter up in the trees and boulders from the inclement weather, and being a very patient predator, the lionness waited for her opportunity.
Barbara has moved the horses, and we will seek to raise funds to put up anti-predator fencing, which involves including some hot (electric) lines within the fence structure.
River called for her baby for three days.  She was there; she knew what happened, but she continued to call in hopes...
The girls have settled down.  Gypsy is probably carrying a foal.  She would have conceived just before being rounded up in early January.
©9/24/10 Elyse Gardner 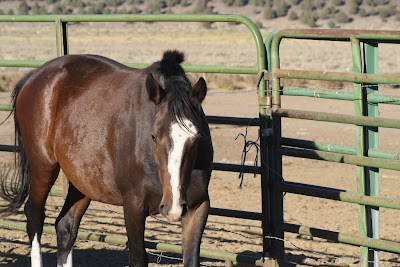 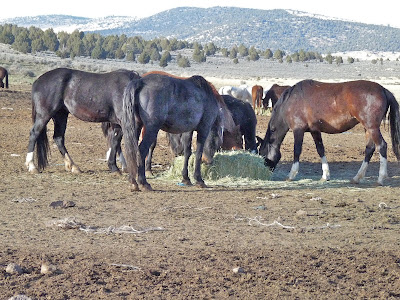 Gypsy had irritated eyes and allowed me to slip a fly mask
on her, very calmly, her second day here.
So I have been very busy editing film, and wiping my eyes.  The reality is that wild horses do have predators, and the predation isn't just in animal form.  Barbara has lost five other foals to pneumonia this year, probably largely due to the very sudden shift in the weather.  The horses were putting on their winter coats, and it got very warm.  Then within a week, it was snowing and sub-zero temperatures. Five babies, older than Moonbeam, who was three months old, got very sick and died within two days even though Barbara got them in and began treating them.
I do not believe in predator control, and neither does DreamCatcher's Barbara Clarke.  I miss this regal little girl.  I hope, and I do believe, that Freedom recovered from his wounds and lives on with a new family.
What terrifies me is a BLM willing to rope and hogtie a horse such as this.  It has to be an odd sort of competition they feel with these beautiful animals that simply want to be free.
After all, the contractors are paid for the horses who come in.  Period.  They were paid for Freedom.  If the horse escapes, they still get paid for having brought that horse in.  They were paid for that 23-year-old stallion who was hogtied; they didn't need to go get him a second time.  If a horse has the guts and physical ability to escape in this way, he has everything we want in a wild horse on the range; let him be.
©Barbara Clarke, November 2010 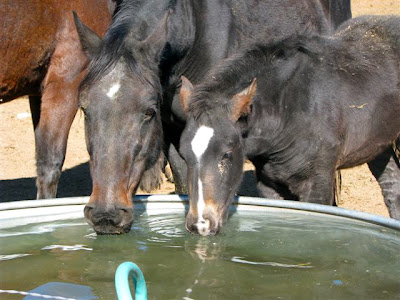 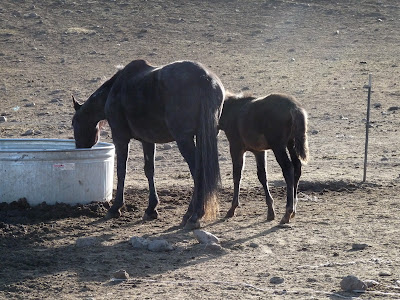 I have been moved in putting together the story of this family.
The video of the Freedom Family's Story had taken a back seat to all the urgent things we've seen over these months -- the helicopter pushing Banner; the foals; Atticus; the crash into the crossbars during processing.  I was savoring having a happy story in my back pocket to bring out for you.
And then I got the word from Barbara that a mountain lion had come closer to her house than ever before and killed a foal...
And so it is time to tell her story.   As my dear contributing friend for their adoption said to me, Moonbeam shone for a season, and for a reason.
So compiling all I have from their entire journey with us, starting January 2nd,  I hope to have that finished this week.  I just know I have this gift, this wild horse family story, which is a microcosm of THE wild horse family story, so we will learn of it together.
Next time, in Part II, never before seen footage of Dahlia, Freedom's young, three-year-old mare, longing to follow her stallion over the fence.
©1/2/10  Elyse Gardner and Bob Bauer 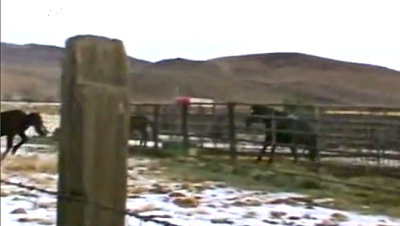 Dahlia runs up to the fence in the adjoining pen as she helplessly
watches her world forever changed as Freedom, her stallion, escapes.
For Moonbeam, for Mouse, for Freedom, Dahlia, and River, for the wild horses, captive and free, and their humble burro friends,
To be continued,
Elyse Gardner

Posted by Humane Observer at 4:58 AM