Greetings from the Getting Well Chair... 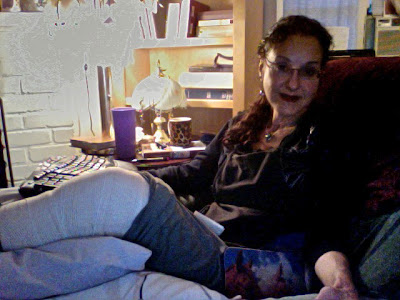 Well, I seem to have missed wishing you all a happy Thanksgiving as I learn how disabling pain can be.    As you can see, I have a big fat right knee bandage. I had arthroscopic surgery to repair a torn meniscus, damage I sustained thanks to the drunk driver who rear-ended me and Laura Leigh as we were heading for Nevada in preparation for the Tuscarora roundup in July, totaling my Rav4.  It took two cortisone shots to get me through the Twin Peaks roundup...  My doctor treated me like an elite athlete -- my heartfelt thanks to him -- because he knew how important it was for me to finish documenting that roundup.
Anyway, that's all history now. I'm planning/hoping to be back at work with the horses in January, by God's grace and good physical therapy.
Blog has been quiet; I'm sorry about that.  Here's why:  When I'm not saying, "Ow ow ow ow ow," I've been prepping a lot of film for different people in support of the horses and burros. It has seemed very important to meet these requests, but my own work keeping you updated has suffered, and that bothers me.
However, we have all been kept well informed of the difficulties of the horses by others who have been diligent to appear, cameras ready, at the roundups.  Here is footage, courtesy of Laura Leigh, of the horses' experience as they were removed from their homes at the Silver King roundup in Nevada.  The  Silver King roundup was tragicll told.
Once again BLM and its contractors demonstrate a chilling lack of compassion toward our wild horses, exemplified by their leaving these animals trapped -- frightened, fighting, thirsty -- in this space, and leaving stallions with mares like this, is unconscionable.  There is no justification for this.  It is entirely avoidable suffering.  These contractors, paid by the horse, should lose their fee for each horse having an avoidable injury caused in this circumstance.  In fact, they should be fined additionally for inflicting this needless suffering.  If they lack the compassion gene and are not motivated by empathy, then a little financial incentive is in order.  Congress has the ability to do this.  BLM has the ability to include this in its contracts with the roundup contractors, but BLM is complicit in all of it.  I do not single out the contractor because the buck, very simply, stops with BLM.
Our cameras keep capturing scenes like this at every roundup.  BLM wants me to talk about the good things it does.  Okay: It would be a good thing to see these contractors penalized for this.  It would be a good thing to see BLM stand up like it's supposed to and ADVOCATE for these horses for a change.
Instead, they are supporting the Summit of the Horse, and top BLM executives -- like Bob Abbey; it doesn't get any more "top" than he -- and Dean Bolstad are headlined as key speakers for this blatantly, unabashedly pro-slaughter rally put on by the slaughter proponents, scheduled to take place in Las Vegas in early January 2011.
Madeleine Pickens wrote an articulate letter to Bob Abbey which I encourage all to read.  She is right on point.
It was a dream of mine after the Pryor Mountain roundup of September 2009, that the horses would never again be subjected in silent anonymity to roundups with only their captors present, with no cameras, no one there as a witness on their behalf.  Thanks to so many people, that dream is almost a reality.  People are showing up with cameras and Congress, and the world, are now seeing that wild horses and burros are not starving, as BLM has told the public for years, as though BLM were doing them a favor by removing them from their homes.
Congress and the American taxpayer are now firsthand witnesses to the real fear, suffering, and cruelty the horses all face as a result of these roundups despite BLM's attempts to whitewash its callous behaviors through the handpicking of "humane observers," most of whom are vocal horse slaughter proponents.
The Bureau of Land Management continues to try and perpetrate the myth that roundups are gentle and humane.  Likewise, the new report by BLM's handpicked "Independent Designated Observers" tries to cast roundups in a positive light despite mounds of evidence -- even their own evidence -- to the contrary.  For example, they note that in the Stinking Water roundup:


...a 23 year old stallion jumped out of the pen and escaped the trap site.  About 1/2 mile from trap (sic), he was subsequently roped and his legs were tied while in a recumbent position, and eventually was transported in a two-compartment stock horse trailer back to the Burns Corrals.

"Eventually transported"?  Good night, how long did this older, proud and free stallion have to lay there hogtied in the heat?  What was so important that they couldn't allow this magnificent animal who managed to jump out of the pen, like Freedom did, to remain free?  Didn't he earn that?  Imagine chasing down and hogtying Freedom:  it's the same thing.
And the "Independent Designated Observers" even found it necessary to make this their first recommendation (gee, I wonder why...):


If at all possible, horses should not be roped or tied down in a recumbent position for long periods of time, especially coinciding with exhaustive or overheated conditions.  Strict criteria should be established to determine the initiation and purpose of this practice.


If necessary to implement these procedures, these horses should be identified, marked, and/or confined separately from the others in the gather and observed for any injuries or metabolic conditions for the next 48 hours.  This could be achieved by moving these animals to designated, smaller holding corrals.

It sounds as though these observers couldn't track this stallion, who disappeared into the system, and they realize how wrong this is.
They nevertheless call the handling "gentle"?
The truth is, it would seem that wild horses are still victimized by a segment of the population a la The Misfits.
Many things in this report are very troubling because of the misrepresentations made, such as horses merely "trotting" or cantering into the trap.  I have footage of, time after time,  horses running into the trap.  \  We all know that.   Perhaps the writers would like to explain?  And minimal roundup experience, I would add.
I"m working on three different videos and situations for you, tying into Part 2 of Foals and Roundups.
There are so many horse stories that need to be told, which brings me to what I've been trying to avoid. . .
I've recently suffered a loss that knocked me to my injured knees.  I was going to wait to tell you about when the story is complete -- I'm working on the entire video -- but I feel I want to tell you now, and I will.  But this story deserves its own post, which will come right on the heels of this one.
So for now, pressing on for the wild horses, captive and free, and their stalwart burro friends,
Elyse Gardner
Posted by Humane Observer at 10:06 PM