©Photographs by Craig Downer  {CLICK ON PHOTOGRAPHS TO ENLARGE) 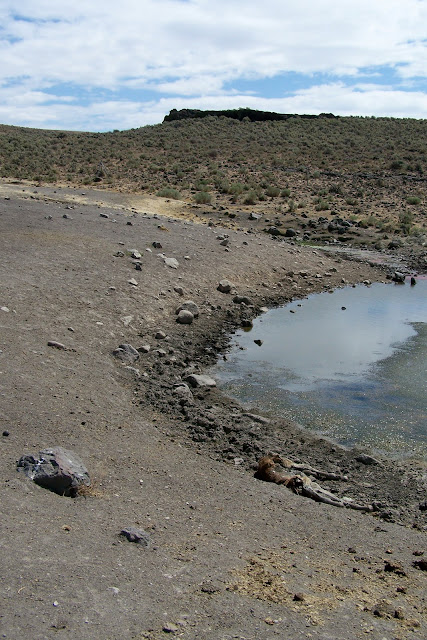 After the roundup activities had ceased on the first day of the Twin Peaks roundup, Craig Downer and Chrystie Davis went looking around on our public land to see what they could see, and what they could see was this dead baby, approximately two weeks old.   I am now free to release these photographs for you.  An investigation is under way.  I've reposted The Cloud Foundation's press release and added photographs provided by Craig Downer.
Thank you all for hanging in.  Tell a friend about our wonderful wild horses.  Tell them that Texas hasn't a one anymore, not one single wild horse, unless it's an adopted mustang from another state.  Tell them there's only one herd left in Montana on 40,000 acres, and the Bureau of Land Management wants to keep that herd at only 120 horses (and they are starting to build a fence to keep those horses out of a part of their customary range because it's in our National Forest and not technically BLM land.  What happened to Mr. Abbey's and Mr. Salazar's promises to work with other agencies for the benefit of the horses?).  Tell them this is serious.  And tell them where they can go to join their voice to the millions insisting on appropriate true protection and an end to the helicopter madness.
I know people get  particularly emotional over issues concerning foals.  Let's remember:
Whoever did this to this innocent in Twin Peaks, it goes to remind us that these animals need our protection. Please be clear that just because this baby's body was found in the Twin Peaks HMA doesn't automatically mean the BLM did this or that the contractors did this.  The wild horses have been targets for all manner of abuse, including the men in Nevada who just pled guilty to shooting the five horses they were charged wilth killing (six were actually found).  The BLM are the ones who led that investigation and gave the prosecuting attorneys the evidence they needed to charge these men and obtain guilty pleas.
The issue we need to stay focused on is restoring a rightful share of the range to the wild horses and burros and examining BLM's determinations on Appropriate Management Levels, as well as the methods of removal and the skewing of sex ratios.  These are the issues, lest we forget. We want to protect the wild horses and burros and their wild society.
While I take great issue with the BLM's methods of managing our wild horses, I want to see what this investigation reveals before pointing any fingers.  My thanks to the officials launching an immediate investigation.
For the wild horses, captive and free, and their humble burro friends,
Elyse Gardner
Humane Advocate Observer
Two-Week-Old Wild Horse Shot and Killed Before California Roundup
Advocates ask for investigation
Sacramento, CA (August 13, 2010)—The body of a wild horse foal was found near the site of the Twin Peaks roundup Wednesday by Craig Downer, wildlife ecologist and Cloud Foundation Board member, and Chrystie Davis, wild horse advocate. Davis, an experienced horsewoman, examined the foal for any broken bones. What she found was an apparent rope burn on a rear leg as well as a gunshot wound.
“It seems as though the foal was shot in the gut,” Davis states. “It looked as though the foal was abused, lassoed around the hind legs and dragged.”
©Photographs by Craig Downer 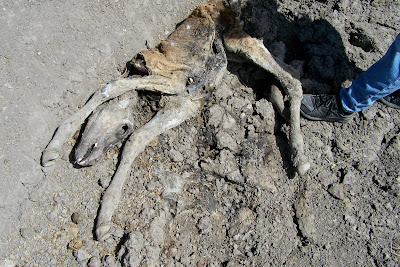 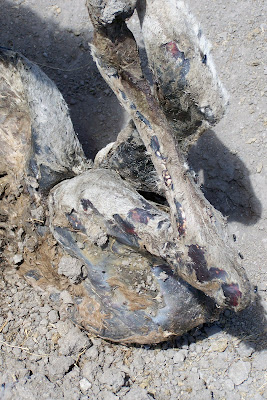 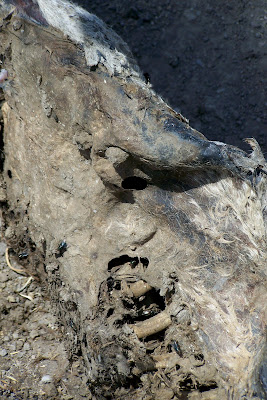 The foal, approximately 2 weeks old, was killed prior to the start of the controversial Twin Peaks Herd Management Area roundup in Northern California. When Davis told BLM officials about finding the gunshot foal, Bureau of Land Management (BLM) employee, Carman Prisco, told Davis she must be confused and the dead animal was an antelope. Photos taken by Downer confirmed that this is indeed a wild horse foal.
Photographs taken at the capture site, set on sharp lava rock, reveal blood stains within the trap.
Mustang advocates ask BLM law enforcement to conduct a thorough investigation into the abuse and death of the federally protected wild horse—killed before independent contractor, Cattoor Livestock, began rounding up wild horses with helicopters.
Field reports from those on the ground noted a severely injured white stallion that suffered head trauma supposedly from fighting with other stallions in tightly packed transport vehicles. Even though the injury was serious, the BLM contractor was quoted as saying a vet “might need” to be called. The whereabouts of that stallion are currently unknown. Another stallion was off loaded into a pen with eight mules that attacked him, causing traumatic injuries. This incident was also brought to the attention of the BLM by public observers.
Advocates were told yesterday that there were no injuries, yet when they went to look at the horses in holding, the area was blocked off. They were told that they could not access the area because the “injured horses” needed to rest.
Injuries are not uncommon in roundups and underscore the need for public access, says Ginger Kathrens, Director of the Cloud Foundation and EMMY Award-winning producer.
“Access is absolutely essential and is granted by the Constitution,”  says  Kathrens. “The ‘acceptable’ suffering of these horses is simply not acceptable to the caring public.”
Laura Leigh, Cloud Foundation Herd Watch coordinator, agrees.
“If this is what we see when the BLM actually allows us in, what happens when they black out their actions to the press and public?” asks Leigh,  plaintiff for the Tuscarora round-up that ended July 20 in Nevada, “The time for real Congressional intervention is long overdue.”
The recent round-up in Tuscarora, Nevada—also run by Cattoor Livestock—resulted in the deaths of thirty-six wild horses.
###
Links of interest:
Wild Horse Roundup Begins in California http://bit.ly/cuUZQN
PR Firm Hired for the Destruction of America’s Wild Horse and Burro Herds http://bit.ly/czf3HB
‘Herd-Watch: Public Eyes for Public Horses’ http://bit.ly/9Wvh58
The Mustang Conspiracy: Sex, Drugs, Corruption, and BP – investigative report http://www.abovetopsecret.com/mustangconspiracy/
Wild Horse and Burro Act http://bit.ly/a7hOeS
Disappointment Valley... A Modern Day Western Trailer- excellent sample of interviews regarding the issues http://bit.ly/awFbwm
Fact Sheet on Wild Herds & The Salazar Plan http://bit.ly/bfdX1y
Past Cloud Foundation press releases http://bit.ly/TCFpress
Posted by Humane Observer at 10:45 AM