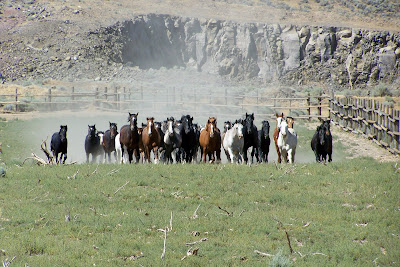 These horses are being forced off this lush 798,000-acre region
Twin Peaks is losing her horses. This promises to be a massive roundup unless the President or the Congress steps up with the moratorium now actively requested by 54 members of Congress and millions of people.  The individuals at the Bureau of Land Management plan to take every one they can find, PZP every single mare, and release up to 500 horses back, skewing the sex ratio to 60 perent stallions, 40 percent mares.  We will only have 72 burros on all this vast acreage of 798,000 acres.
People who have gone out and appreciated these wild horses for years are in angst over this roundup.   Mr. President, Mr. Abbey, Mr. Salazar,  with only 448 wild horses left on 798,000 acres, do you realize how challenging it will now be for Americans to even find wild horses on Twin Peaks?  And the burros:  with only 72 burros allowed to eat the precious forage on this their HMA, what a rare sighting a burro will be.
©5/21/10  Photo by Elyse Gardner 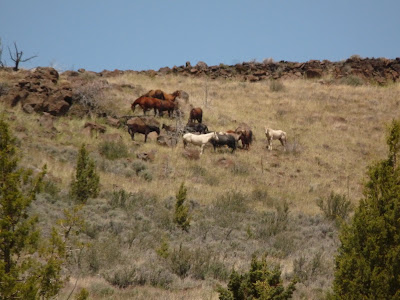 Are these horses we saw living in Twin Peaks on May 21
the horses attempting to flee the helicopter above?
After what Craig Downer describes as a "valiant fight" running back and forth, the horses were drenched with sweat and exhausted, and some bore obvious injuries.  Unlike many of the horses I've seen rounded up, Craig reports that these horses knew full well they were running into a trap and tried everything they knew to evade entry.
©8/12/10 Photo by Chrystie Davis 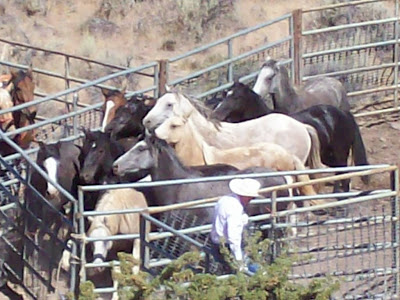 At this point I have seen a great many horses being pushed by helicopters, and usually they will falter a bit, hesitate, but follow the Judas horse into the trap in a split-second decision to trust one of their kind who is confident and sure of the way. (Cloud ignored the Judas horse during his last roundup, however.)
During the very small portion of the Tuscarora gather I saw (just two days, a couple of hours each day), the horses there, too, were trap savvy.  They tried determinedly to refuse the trap, but the mechanics of the helicopter nearly every time will trump the pounding of hearts, churning of strong but tired legs, and heaving lungs.
Imagine sitting around and watching TV with family.  You live with your entire, multi-generational family.  Grandma Jane is very sprite and lively, and you are always surprised to realize how old she really is. But Papa (Grandpa) has some serious health problems, but he does well by staying around the home taking it pretty easy, not much exertion. And then there's your little sister and brother, who are only 2 and 4.
Now imagine foreign invaders have come and raided your home.  Everyone is rushed out the door.  No one knows why.  The invaders are not to be trifled with.   They intimidate everyone, frightening everyone to keep moving, don't get bogged down;  quickly, keep moving. Your family is frightened so they are running.
©8/12/10 Photo by Craig Downer 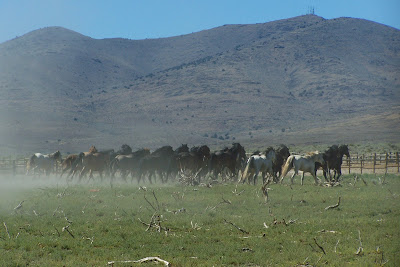 Everyone must go three miles although they don't know it at the time.  It is terrifying all the way.  And mom and dad are fine, but the little ones, and grandma and Papa, are struggling.  Somebody breaks a leg.  Papa has a heart attack.
You get the picture, I trust.
Three miles isn't far for a human, right?
But for which human?  Three miles to mom is not the same as three miles to little sister or to Papa.  Wild horses live in families, and some are not able to endure the marathon required.  A horse is not a horse is not a horse...
I'm using three miles as a loose human equivalent of eight miles to a horse.  That is a very long way for any horse to be in flight mode.  For older or younger horses, it is asking too much.
As you can see from Craig Downer's report, below, these horses were extremely stressed.
©8/12/10 Photo by Chrystie Davis 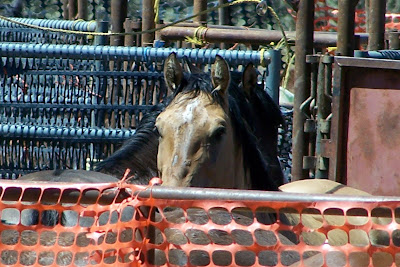 CRAIG DOWNER'S REPORT ON THE SECOND DAY AT TWIN PEAKS

Today, Thursday, August 12, 2010, we observed ca. 300 wild horses and a few burros, rounded up from the Twin Peaks Wild Horse Herd Herd Management Area (wh hma) in the same general vicinity as yesterday and at the same trap site.  This is in the Bull Flat area to the east of the Skedaddle Range.  Today, however, I was able to get quite close to the trap with BLM's guidance so as not to startle the bands.  This turned out to be an anguishing thing to witness as the approximately 25 wild horses who were brought in had been chased by helicopter over a long distance strewn with sharp lava rock, I would estimate at least a dozen miles with all the back and forth they made in their attempts to escape.

The particular thing about these few bands of horses is that they repeatedly resisted going into the trap, and the Judas horse had to be employed again and again, and the helicopter had to repeatedly drive the horses in.  The distant observers from  the other side of the trap saw that 20 horses did in fact escape during this valiant flight to retain their freedom.

The wild horse advocate observers agree that the horses had been worked long before the public observation to bring them around the trap from far reaching areas so as to herd them in to the trap in large numbers, and many of the horses were soaking wet and bleeding in various parts of their bodies.  Some had big contusions on the hips. Others were bleeding from the nostrils.

This was not an easy thing to observe, especially considering how very unfair the BLM-set Appropriate Management Level established for the wild horses in this vast area, ca. 500 horses within ca 800,000 acres, 82% of whose forage has been allocated to livestock as the wild horses are marginalized, claimed to be overpopulated ( i.e. in "excess"), while in fact they are being excessively reduced to very underpopulated levels. Their broken families will exacerbate uncontrolled reproduction in the few that remain and set back the generations-old process of ecological adaptation.

While I celebrate the escape of the 20 horses, we should do so guardedly.  It is more than likely that the Cattoors, the roundup contractors, sent wranglers out to rope and drag these horses in.
What Craig Downer is referring to, when he states, "Their broken families will exacerbate uncontrolled reproduction," is often referred to as "compensatory reproduction," where a species increases its normal reproduction rate because its survival or population is threatened. This increase in reproduction is in order to "compensate" for the loss of life and population and insure the survival of the species. What a brilliant creator we have. Hence, the title, "compensatory" reproduction.
Good, honest science indicates that BLM's policy of roundups, even if only every five years, is actually creating an artificially increasing population, which triggers more roundups, which triggers more compensatory reproduction, which triggers more roundups... you get the picture.
See the below report by J. Kirkpatrick, whom I understand to be the inventor of PZP, and a man highly respected by the BLM and the HSUS.  This is from the Journal of Wildlife Management, Vol. 55, No. 4 (October 1991) pp. 649-652, published by Allen Press, Compensatory Reproduction in Feral Horses:

The Maryland herd consists of approximately 150 horses living on Assateague Island National Seashore, and, in keeping with National Park Service policies of nonintervention, management is minimal.  The Virginia herd consists of approximately 200 horses inhabiting Chincoteague NWR; these horses are intensively managed through the annual removal of approimately 80% of the foals, a practice dating back >30 years.  In an 8-year study of reproduction among the Assateague Island horses conducted between 1975 and 1983, Keiper and Houpt (1984) reported an annual foaling rate of 74.4% among sexually mature mares on the Chincoteague NWR.  In contrast, the foaling rate for the unmanaged Assateague Island NS horses was only 57.2%, with an age-specific range of 40-70%.  Since 1986, the Assateagu;e Island NS foaling rate has dropped below 50% (J.F. Kirpatrick, upubl. data).

Maybe it's time BLM started applying some science to its decisions about the wild horses.
For the wild horses, captive and free, and their humble burro friends,
Elyse Gardner
Posted by Humane Observer at 4:18 AM