IS TWIN PEAKS A BLOODY ROUNDUP?

Some, including myself, took issue with the description of "bloody roundup."  I'm reconsidering.
(To enlarge photos, just click on them. —EG)
(For instructions to make a tax deductible donation to this field work, please go to the bottom of this blog.  Thank you).
©Photo by Craig Downer 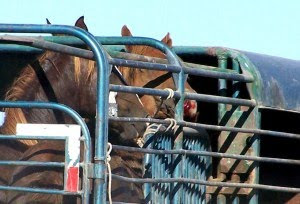 Craig Downer said he observed blood dripping from this horse's nostrils in the trailer shortly after being driven in by the helicopter.  The horses -- young, old, sick, healthy -- often must travel great distances under pressure from the helicopter.
©Photos by Elyse Gardner 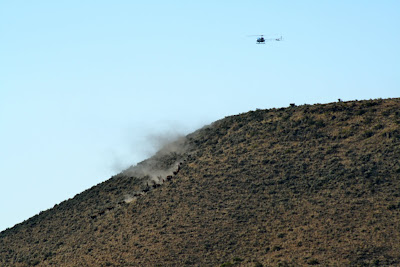 STEEP, ROCKY gather route on 8/14 on 8/15 at this Rush Creek
trap site in the Skedaddle area,  my first two days present. 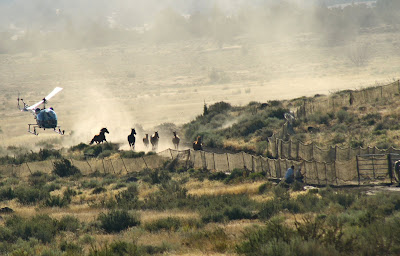 Trap site at Shinn 2 8/20/10
All about family...
In the same pen, this was going on just behind Atticus, who was pacing around as the video depicts.
©Photos by Elyse Gardner 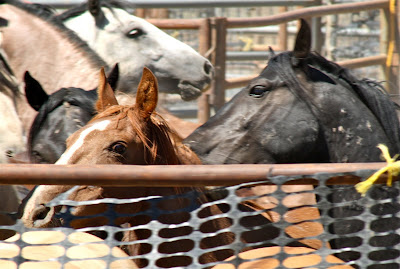 8/16/10  Eyes white and wide with fear, this terrified sorrel in very cramped quarters is unmercifully harassed by dominant black who would not let go of this young stud's neck.  The crowded conditions precluded the sorrel from escape.
©Photos by Elyse Gardner
©PH 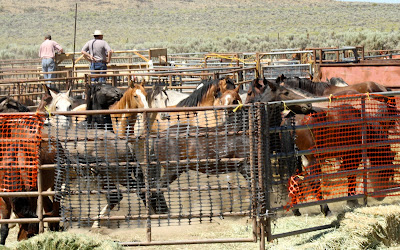 Pandemonium reigned everywhere that day.  All this took place during processing.  Timothy J. Harvey, the new Humane Advocate (wearing hat, back to camera) stood astride the catwalk peering down into the chute watching the contractor and BLM innoculate, brand, and "process" these frightened, baffled souls who've just been driven out of their peaceful mountain homes into crowded pens, stripped of family, plastic-bag-whipped into all kinds of enclosures, and poked with needles and shaved with loud electric clippers.  All of this within six hours of their capture. 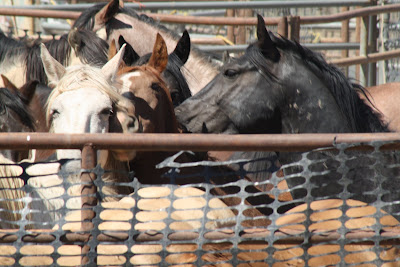 We've seen a lot of facial injuries.  Tim Harvey said the horses were coming in fine; there were very few facial injuries in the trap pens.  The horses were seen crashing around in the temporary holding facility, colliding with the metal panels as they rear and panic in the unfamiliar confinement.  We watched a mare resisting the squeeze chute entrance rear and smash her face against the metal, resulting in a bad laceration bilaterally around her orbital area.  The issue of padding was raised, and we were relieved that the contractor is willing to install it in at least some places.
These horses did a lot of crashing around, and it was often pandemonium during processing.  These animals are completely disenfranchised.  They are equipped to live in harsh climates and take beautiful care of themselves.  They are helpless in the face of the helicopter and our flagwhips because, by their very nature, they are gentle prey animals, and the predator that is man is not respecting their right to live even in the corner of the world we had once called their legal Herd Area.  Cows and sheep natural gas and steam power plants are taking water over even in their Herd Management Areas (HMAs).
They maintain a vigilant, expectant waiting now in this phase of their captivity.  In a few weeks following their captivity, the Calico horses became depressed and seemed to lose hope.  They became irritable and started picking fights at the feeders.
©Photo by Craig Downer
Californians are outraged about this roundup and the loss of over half of our wild horses and burros, as are many non-Californian Americans.
Finally, is this a "bloody" round up?  Warning:  some graphic photos
©Photo by Elyse Gardner 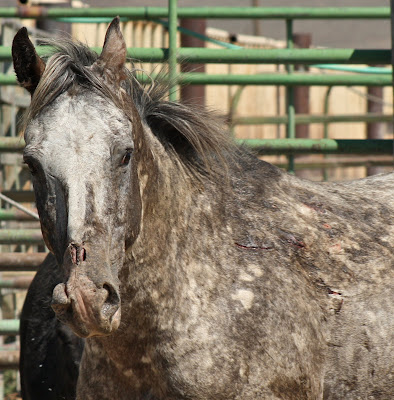 This older stallion had an old, healed injury.  He was being aggressively attacked by another stallion.  I alerted staff, but they were busy and didn't separate the horses in time, and he was reinjured.  Nowhere to run; nowhere to hide.  Vet said he will recover.  He had a bloody bite wound on his neck, also.  All this just after being chased by helicopter.  If this isn't government subsidized animal abuse, what is?  I believe more upsetting than this injury for this horse is being trapped in a pen with an aggressive stallion.  When staff first "separated" them, they unfortunately put him in a pen alone with the aggressive stallion. I want to thank and acknowledge the Litchfield staff; they were trying and are working hard, but the horses were still let down.  Let's try a little harder, please, everyone.
©Photos by Elyse Gardner 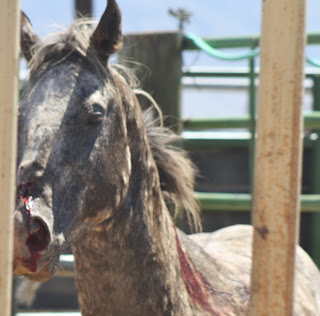 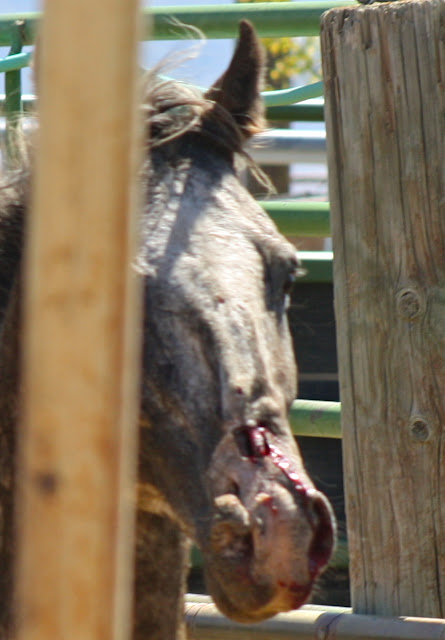 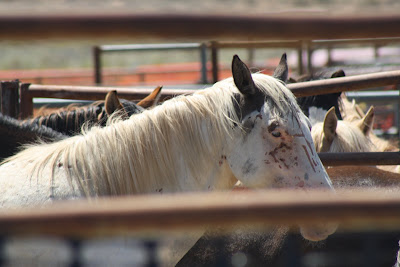 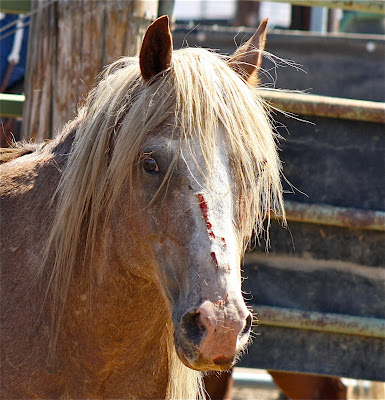 BLM personnel have been polite in my presence, accommodating except for the most important thing to me:  Access to the horses at some critical times, like when they arrive at trap pen and then when they arrive at holding facility.
Lest we forget, the issue is not making roundups humane, but in ending this myth of wild horse and burro overpopulation by looking at the real numbers and animals and special interests in the HMAs couched in the spirit of "multiple use."
Overcrowded pens are thrust on the horses, which forces them into nerve-wracking awkward situations with each other.
What is left?   There are pitifully few areas where the horses are the "principal but not necessarily exclusive" presence as mandated by the unanimously passed 1971 Act.  Consequently, they are being systematically squeezed off our lands in escalating speed and numbers.  There is no time to lose.
A real investigation is vital and will demonstrate this a BLM-created overpopulation in name only, and our last viable herds are being drastically, dangerously, unnecessarily reduced.  BLM chooses to call the wild horses "excess"; they can just as easily label the cows "excess."  Let the horses have their puny 26.6 million acres; why must they take a back seat to livestock on their own HMAs (herd management areas) ?
Apparently my senator's office went and sent an aide to see one day of this roundup but spoke to no advocates about what she/he was seeing.  Without talking to experienced advocates on the ground, I fear it will be BLM-speak and business as usual for my senator.  How savvy is this person?  Time will tell.  I am pleased that Senator Feinstein has a finger on this pulse.
Senators, California voters who care for wild horses and burros need you badly right now.  Senators Boxer and Feinstein have been a big force for change in many arenas; we are looking to them here.   I love my home state, and I want it to prove different than the others.
What I'm asking:  stop this roundup now, before we are down to the scant 450 horses for which BLM is targeting.  I know there is a plan in place.  I know about the legalities.  I also know that hundreds of wild horses and burros are losing everything, and they don't know how to read.
Released stallion
©Photo by Elyse Gardner 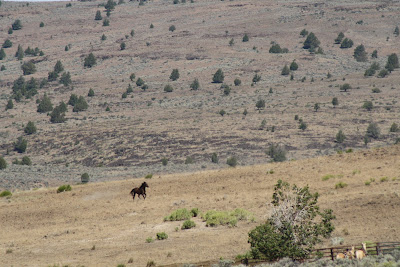 It was very nice, and it is the right thing to do:  California BLM actually released a 15-year-old stallion it captured after he spent a couple of hours in the trap pen.  I'm told BLM used to do this on site with the age 10 and older horses.  This is more like it, BLM.  But this is only one, and it is rare.
California BLM have been courteous and somewhat accommodating, but as usual, the process is terrible for the horses.  This is not about personalities; it's about the horses.
I still want to have five minutes to document the horses upon arrival to determine not only their general condition, but to pinpoint when injuries are occurring.  Tim Harvey did that briefly, but he is no longer on site.  The contractors have agreed to pad some areas of concern (the metal bars on the chute and perhaps the trailers).
It simply is not right that no representative of the public can see what's happening if a member of the Board isn't there.   I am an officer of the courts, an equine science major, and I have a great camera.  I simply want five minutes close up at the pens to document condition; then I walk away.   Someone needs to do it if not I.
To see the Twin Peaks horses in their natural environment go the Linda Haye's new blog.  She's been documenting these horses for many years.
I remain,
For the wild horses, captive and free,  and their humble burro friends,
Elyse Gardner


To make a tax deductible donation to my field work, please go to DreamCatcher Wild Horse and Burro Sanctuary.
Click "Donate," and as you go through the process, you will have the option to earmark your donation as you wish.
You will see, "Add Special instructions to recipient."  There you can insert, "For field work," or, "for Humane Observer," or, "1/2 for Sanctuary and 1/2 for field work" (whatever you wish) and it will go where you specify.  Thank you.
Posted by Humane Observer at 12:53 PM