Nearly all horses have gained weight and regained their health.  Nursing mares and yearlings are on a high nutrition diet while all other horses in adequate body condition are on a maintenance diet.  A few of the 2010 foals are noted with minimal levels of upper respiratory disease.  They are being monitored and treated as necessary (see previous attached Upper Respiratory Veterinary Report).  Gelding of the five years and older stallions continued this week.  Dr. Eric Davis from the Humane Society of the United States visited the facility on Thursday, July 1, to observe the castration process.  One death occurred this week: 15 yr old gelding (1442) was found dead.  Death reason unknown.  No necropsy was performed.  Mares are still foaling, but births are fewer and intermittent.  No miscarriages occurred.

Dr. Eric Davis is the head veterinarian for the HSUS (Humane Society of the United States).  He previously visited Broken Arrow on two occasions.  His previous reports were based on what he saw and was told by BLM staff during those brief visits.  He got another peek this last week.

I spoke with Dr. Davis, and he was emailed information, including photographs and links to videos, earlier last week before this visit to Broken Arrow.  BLM had announced a month earlier their invitation to Dr. Davis to view their castration procedure.  BLM has been unwilling to allow anyone else to view these horses except U.C. Davis, but I've not heard whether the vet from U.C. Davis followed through.
Having an outside veterinarian view their procedures is always a good idea, but public concern for the Calico horses hasn't been only with the castration procedure itself; concern is also high regarding BLM's post-gelding policy of no-pain-management for horses experiencing complications and acute pain (such as evidenced by Legacy).

The wild horses at Broken Arrow are grappling with many other serious issues, and I sent Dr. Davis information so he would have these things in mind as he spent time at Broken Arrow. Spot-checking a facility like Broken Arrow will not reveal a history of most ongoing issues unless it is volunteered, and his previous reports simply did not address many of these things.
Here are things I've raised with Dr. Davis. We are looking forward to his report.
©Photograph by Elyse Gardner 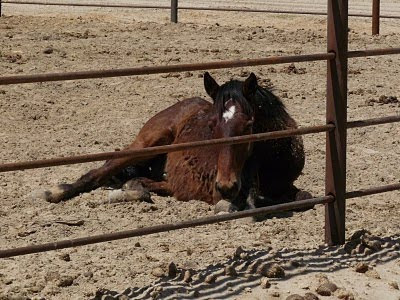 1)  THE CASTRATION COMPLICATIONS
I asked him to revisit BLM's pain management policy for newly castrated horses since BLM's policy does not provide for any medical pain interventions. I provided links to my videos of Legacy laying down and Legacy standing up in obvious pain. In his previous report, Dr. Davis had apparently been misinformed since his report stated:


When these complications [re castration] occur they are treated with analgesics and antibiotics, as would be the case in any veterinary practice. The outcomes described were as good or better than published results.”   [Emphasis added.]

(In our conversation, Dr. Davis confirmed to me that were he present with a horse presenting as Legacy did, he would have brought Legacy in for exam and intervention, and he has suggested to BLM the use of Banamine post castration. He will discuss this more in his report.)

2)  SICK FOALS
Making use of the hospital pens to quarantine sick foals with their mothers instead of leaving them in the general population such as those pictured below. 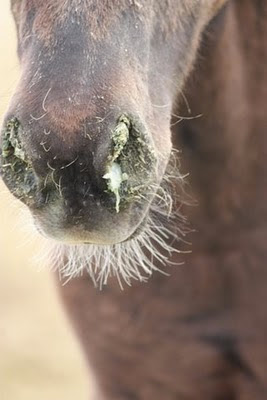 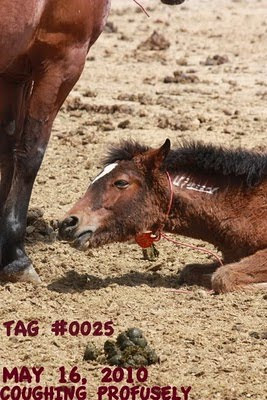 Upper respiratory illness is an acknowledged issue and a known contagion.  Dr. Sanford's necropsy of one dead foal revealed pneumonia.  Foals around eight weeks old lose their maternally transmitted immunities, and they are more likely to get sick.
Why not put them with their mothers into the sick pens so staff doesn't disrupt the rest of the horses in order to examine and to medicate them?
An important related concern is every time people enter the pens, all the horses are at risk of injury.  Several horses have died from neck and spinal injuries due to colliding with pens and troughs during sorting.  Additionally, the crowded pens necessarily create more stress.
Have foals'  nasal discharge been swabbed and tested?  What do they reveal?
Is leaving these sick foals in the general population acceptable by HSUS standards?

3.  DOCUMENTATION AND OVERSIGHT OF FOALS and GENERAL POPULATION
a)  Does BLM have any numbers re foal deaths?  Will they begin to chart the foals?
©Photo by Craig Downer 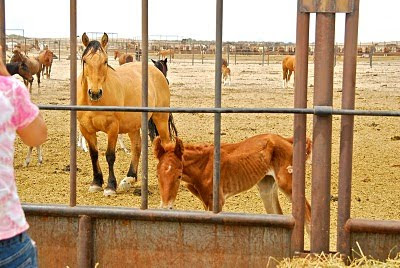 Sorro, emaciated foal euthanized by Dr. Sanford.  (Click on link to see video.)
Many are convinced Sorro could have been stolen by his "mother" Wishful, this beautiful but dry Kiger/buckskin mare, and that he starved to death.  Or was she just dry?  Or did Sorro have nursing problems? Did simple lack of oversight allow Sorro to starve? We will never know.  Apparently no close exam was done.
Has Dr. Davis requested a vet report?  What, if any examination was done?
Is this level of oversight acceptable by HSUS standards? 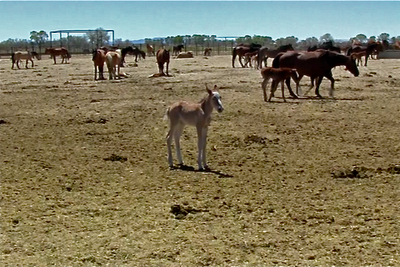 This orphaned foal, pointed out by advocates and adopted as a
second foal by the generous mare Cream Pie, went at least 11 days
before BLM transferred him to Shirley Allen.
©Photo by Cat Kindsfather 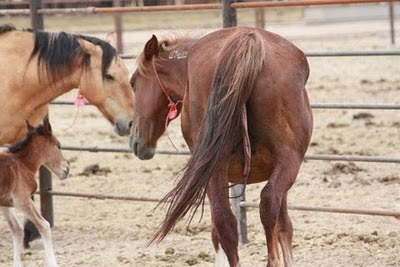 19 days following Sorro's death, "Wishful," believed by BLM to be Sorro's mother (see above), was a foal-less mare left for weeks in this nursery pen, seen here stealing another foal.  The baby was re-united with her actual mother (the mare here with the  placenta still hanging) with the help of Broken Arrow and BLM staff after public observers pointed her situation out. 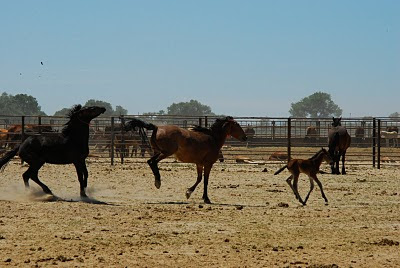 Another foal-less mare in a nursery attempting to steal a foal. The foal's mother is kicking the wanna-be mom.


(a)  Accounting of foals and their mothers: births, deaths, orphaned, sick, etc.
Current BLM policy is that foals are not documented at all until they are tagged and/or branded.  Therefore, BLM does not report or account to anyone the numbers of births, deaths, illnesses, euthanizations, baby thefts, etc.  How many "Sorros" were there?  Is this acceptable by HSUS standards?
(b) Broken Arrow's contract requires a once-daily walk-through of these pens containing over 2,000 horses.
(c) Dr. Sanford is the only vet for Broken Arrow and Palomino Valley holding facilities.
Is the current level of oversight acceptable by HSUS standards?

4.  WINDBREAKS AND OVERHEAD PROTECTION
The horses have no windbreaks or overhead protection.
©Photographs by Elyse Gardner         Sunburned mare 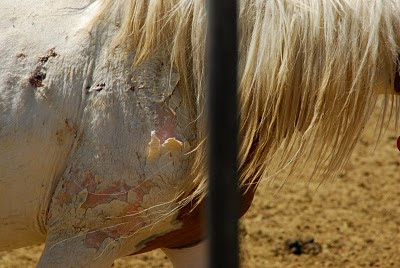 Only two pens contain hills that have any topography at all.   The rest are like the ones depicted below.
©Photographs by Elyse Gardner 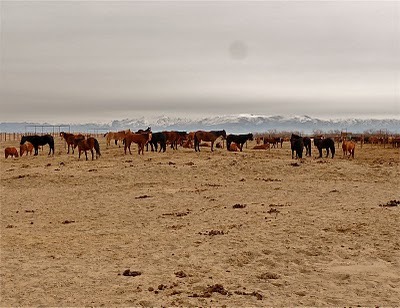 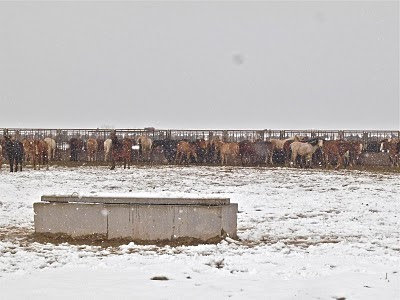 Nevada's summer temperatures are often between 90F to 100F-plus degrees, and winter is often well below freezing with the icy Pogonip ("White Death") fog. BLM adoption requirements specify that two-sided shelters must be provided for horses by adopters, yet none is provided at this holding facility except in hospital pens.
Is this acceptable by HSUS standards?

5)  NECROPSY AND VET REPORTS
We are now getting reports of horses found dead post castration.  Has HSUS reviewed necropsy reports?
As in last week's "Indian Lakes Weekly Update (June 26 thru July 2)," often no necropsy is performed when the announcement is made that a horse was found dead.
Since recently these are deaths that closely follow castration, would HSUS recommend necropsy to determine cause?
In any event, the public would also like to know what is happening to the horses. Over 100 horses have died, and while deaths will occur in any population, these numbers are generally agreed to be excessive.
What would HSUS recommend in terms of necropsy and criteria for performing same? Regarding the foal whose sloughed hooves required his euthaniziation:  Dr. Davis was provided with information and available vet reports with no intake dates and indicating that bute was given to this foal  once every five days.
By HSUS standards, is this an acceptable standard of care under these circumstances?
In view of the imminent roundups at this time of year, where numerous foals younger than the "Calico colt" and sloughed-hoof foals face multi-mile marathon runs on rocky terrain, the horses and public are looking to HSUS for some recommendation and relief.
Are these planned roundups at this time of year acceptable by HSUS standards?
The public is wondering what HSUS thinks of BLM's practice of handpicking to whom it will be accountable.  We would like to see greater public access to our horses.
In the meantime, thank you to Dr. Davis for what we hope was a thorough, penetrating visit to Broken Arrow.
I remain
For the wild horses, captive and free, and their humble burro friends,
Elyse Gardner
Posted by Humane Observer at 12:05 AM