ROUNDUP: FOAL SEPARATED FROM FAMILY, and LIGHTFOOT, ANOTHER COURAGEOUS STALLION, TOUCHES MANY 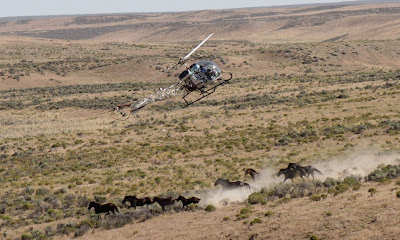 I watched the wild horses in Nevada fight for their freedom today.  Breathtaking, heartstopping, eyewatering, inspiring, gutwrenching; amazing, determined, smart, exhausted, frightened, spent, intelligent, watchful, all describe my emotions as well as the ones who inspired them:  the truly magnificent animals with heart like nothing and no one else, the American mustang.
©Photographs by Elyse Gardner 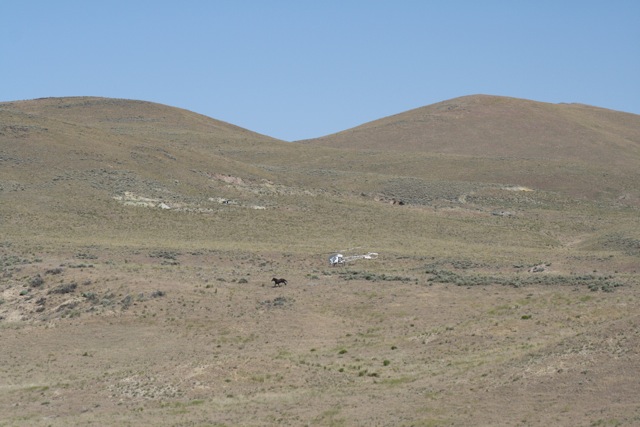 We had seen this stallion, Lightfoot, and his small family band coming from the other side of the draw.
A good number of minutes went by as we herd the drone of the helicopters (two were used).  It was getting really warm out.  Then here he came, by himself, running for all he was worth, leading the helicopter away from his family -- and successfully leading his family away from the trapsite, which they had by this time overrun by a long shot.  I didn't know whether to cheer or to cry since I realize they will just have to run that much longer.  I cheered, and then I cried.
©Photographs by Elyse Gardner 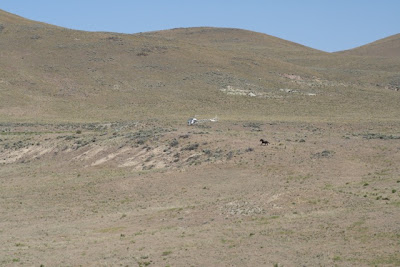 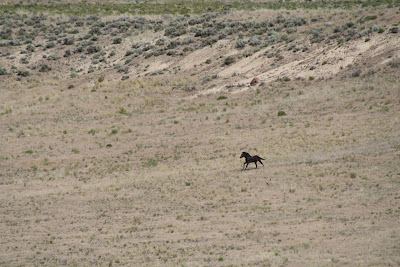 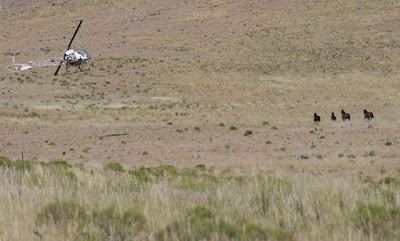 Here came the rest of Lightfoot's family.  Notice they are running toward the helicopter.  They do not want to go back they way the helicopter is pressing. 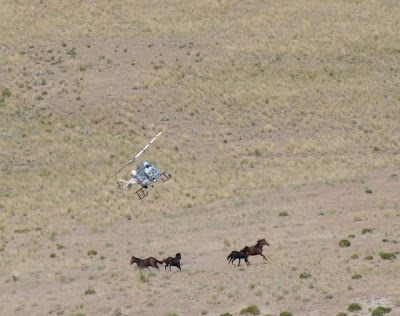 TO BE CONTINUED...
In the meantime, many horses were scrambling.  The pilot had his hands full as these horses evaded the trap time and again.  This struggle is not something I like to see; it stresses the horses and exposes them to injury and death, but it displays their fear of captivity and passion for freedom.
Drenched with sweat, these horses had been running hard for 30 minutes.  Even when the helicopter hangs back in an attempt to slow the horses down when they are still far from the trap site, we could clearly see the horses galloping from the start in an attempt to evade the helicopter before they went out of view behind a hill. 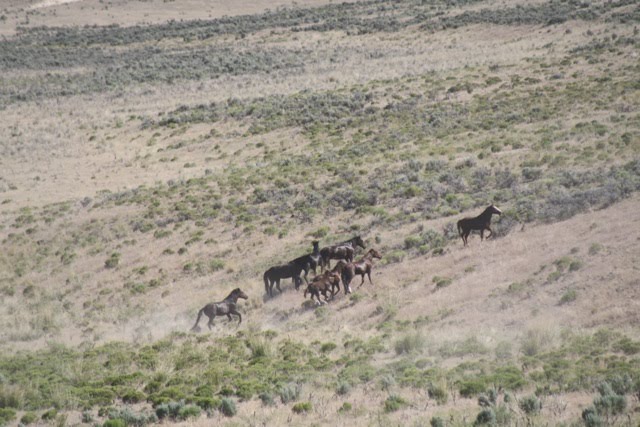 Here the horses are reorienting and breathing before taking off once again... These horses try so hard and run so hard and fast, one of the foals gets separated from the band.
How many get separated who cannot keep up on the range, where no eyes can see? 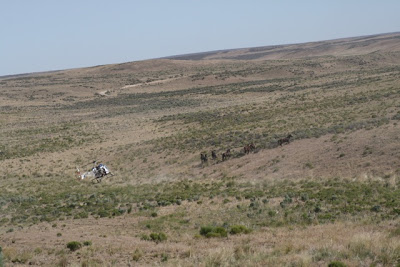 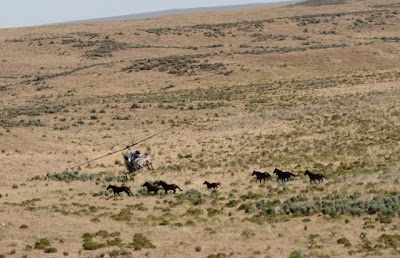 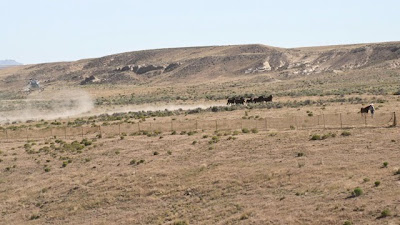 These horses stop at the trap, recognizing danger.  They decided to take off, away from the trap.  Already sweaty and spent, they nevertheless ran so hard a foal couldn't keep up... 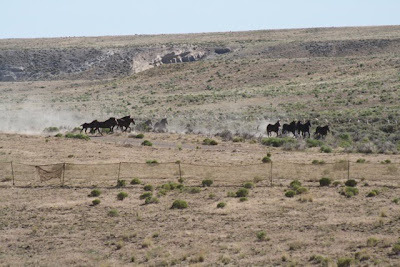 Our hearts virtually stopped when we saw this lone infant being driven and led by helicopter.  This baby was terrified.  Her ears were straight up forward, and her tail ultimately came straight up.  She didn't know whom to trust, what to do. 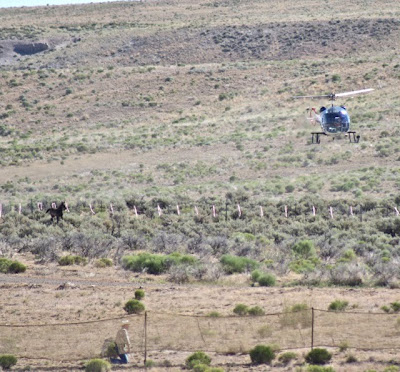 She froze; she ran. 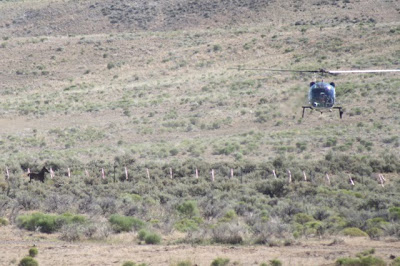 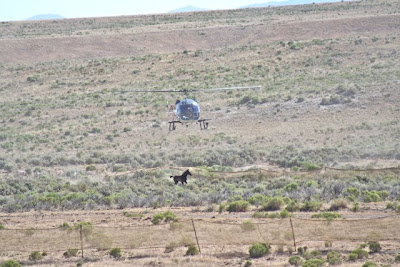 The sound of the helicopter drowned out any call by her mother, already in the trap pen. 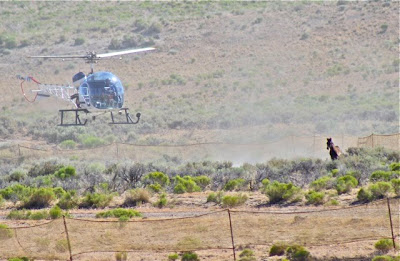 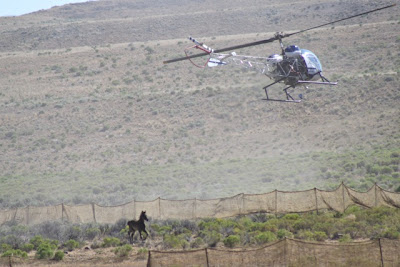 No infant should have to contend with this. July is not the time for helicopter roundups. 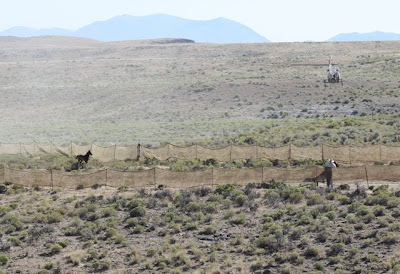 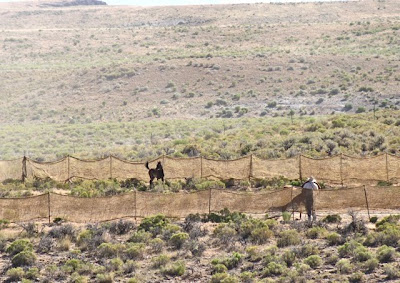 I have to say I've never been so happy to see a Judas horse.  Will it work?
When this baby was first brought over, the Judas horse was still in the pen from the last group.  Now he is in position and ready to lead this baby into the trap. 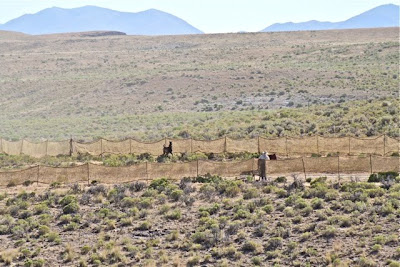 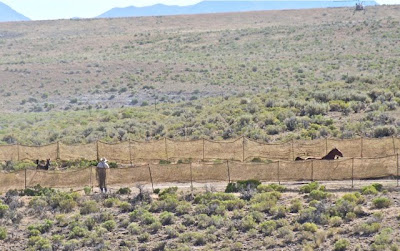 The redemption of his kind, this Judas horse leads this lost and terrified baby into the trap where mom is waiting. 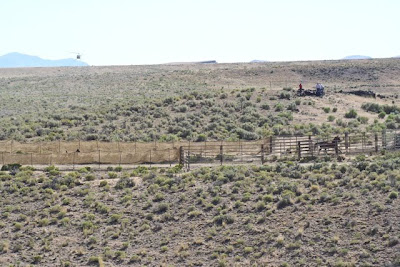 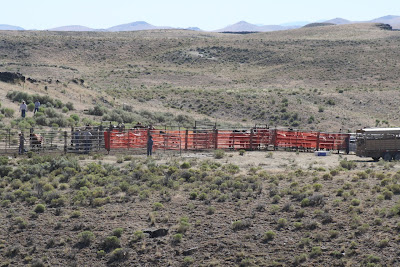 LIGHTFOOT'S BAND...
Remember Lightfoot?  He has been leading his exhausted band all over the hills.  Defeated, glistening with sweat, spent, they are still running from the helicopter now after baby is brought in. 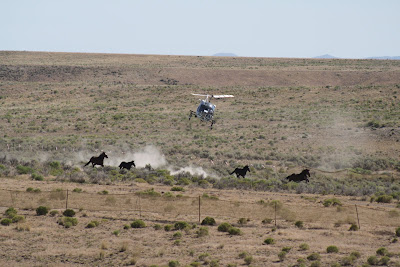 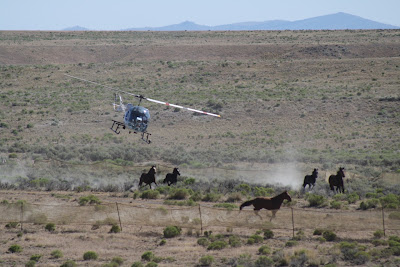 Exhausted Lightfoot and his band are chased in under heavy pressure.  When observing, it's evident how tired the wild horses are in comparison to the fresh Judas horse. 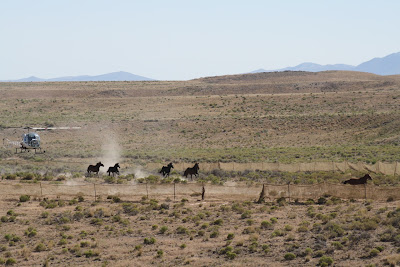 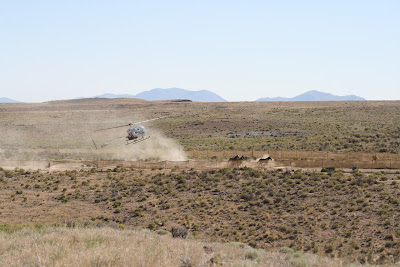 What a terrific waste.  What a vast amount of unnecessary suffering these gentle, peaceable animals have just experienced.  These mares will all be PZP treated, and these horses, after this terrible, monumental effort, will be released.  A lifetime of building family is torn apart in one morning, and it's anybody's guess how much havoc will ensue when these horses try to piece their lives back together.  There are better ways, and knowledgeable horsepeople made many suggestions in Denver at the BLM-initiated "workshop" about how to effectively manage and protect the wild horses with the horses' welfare in mind.
Dr. Cassandra Nunez and Karen Sussman, President of ISPMB (International Society for the Protection of Mustangs and Burros), each emphasized maintaining the family bands intact when dealing with these horses.  The havoc is immeasurable. The ramifications are many.
In the Pryor Mountains, the Bureau of Land Management gathered, PZP treated, and released the horses marked for release, and maintained them in their bands; it can be done.
I urge the BLM to think outside their box and follow through; take advantage of the advocate base that  is willing and ready to work alongside you to make it better for the horses.
George Knapp has a tremendous article this week.  I hope you'll read it; he is very funny as well as very sharp.  Here is the link to George's article.
http://www.lasvegascitylife.com/articles/2010/07/23/opinion/knappster/iq_37053323.txt
Summer is not the time for roundups. If you would like more information, visit http://thecloudfoundation.org for more information.  We can also call President Obama and let him know:  202/456-1111.
I remain,
For the wild  horses, captive and free, and their humble burro friends,
Elyse Gardner
Important Update:

In view of misinformation of which I've learned,  I am updating this post as follows:
UPDATE: 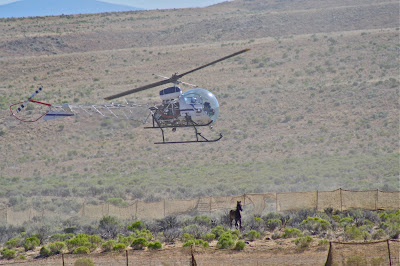 FICTION:  This baby was driven for hours alone by this helicopter in the heat.
TRUTH:      This baby was separated from her band near the trap site because she couldn't keep up with the rapid manuevering during her family's race to evade being pushed into the trap. Within 10 minutes, she was guided into the trap site by the helicopter and reunited with her family.
Although she was running from the helicopter with her family for nearly an hour -- a horrible, grim marathon of fear, an unnecessary situation that never should have happened --  she was with her family up until the last 10 minutes. 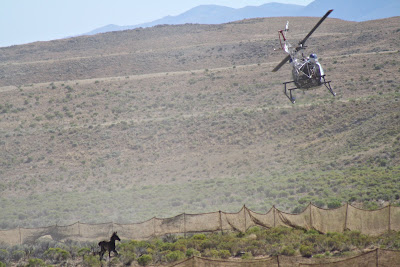 I'm making this post because it has come to my attention that some misinformation and dramatic false allegations are being spread about the story behind these touching photographs. 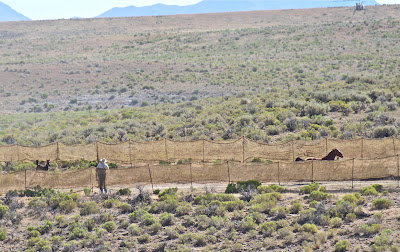 Judas horse leads baby into trap.  In this instance, this is a very good thing.
And as I stated in my original post, never was I so happy to see a well-trained Judas horse.  That horse took off right on cue, and this baby recognized the only thing in that terrifying environment she would dare to trust, and she followed that horse in to ultimately be reunited with her family.
CONTEXT:   The evidence is clear that this roundup at this time of year is wrong and should not be occurring.  This gather is a separate issue from any emergency -- there is no emergency declared by BLM or anyone else in the area of this gather.  Young foals are present in abundance with their soft hooves at this time near peak foaling season.  Foals die, their lives at risk, from roundups like this.  The heat is sweltering.  Mares heavy with foal are at risk of spontaneously aborting from the strain and trauma.
That being said, I want to be very clear that whatever else may occur elsewhere at other times, these photos depict a baby being carefully lead and the helicopter being used skillfully under the circumstances. But they are horrible circumstances, and this baby couldn't have been more terrified.
(UPDATED POST:   In fact, I feel nauseated re-reading the last sentence of this post as I remember the absolute fear of that baby.  Her ears and tail were straight up from fear; it's a wonder she didn't collapse, separated from her family, all alone with the helicopter/glass monster, skillfully handled or not.  It is something that should never be repeated, but BLM and the contractors will do it again tomorrow.  I am sorry, Little One, for trying to make it all right.  IT IS NOT ALL RIGHT.  And I feel literally ill as I recall the monumental effort of those horses running across the vast expanse in the growing heat as the day wears on, Lightfoot overrunning the trap area with his family and disappearing another 10 minutes, helicopter droning on in hot pursuit.)
I have never seen horses struggle so hard as I did, this day, and this baby's parents were among those most determined to remain free.
Advocates are accused -- myself included --  of misrepresenting the facts.  I cherish the truth and do my best to always state it.  If people are misreading or taking information from me out of context, that only hurts the horses by hurting our credibility.
Let's please be extra careful to keep things within context.  If you have questions, I will do my best to find answers.
I love the ardent loyalty we have to the horses.  Let's be careful to constructively channel that drive.  The truth is often disturbing enough; we need not expand or embellish.
For the horses and their humble burro friends,
Elyse Gardner
Posted by Humane Observer at 4:42 AM