AHIGA Inspires Us to Remember Independence on this Proud American Holiday

Greetings on this American Independence holiday, 4th of July weekend.

Look over the struggle for freedom, trace your present-day strength to its source;

You'll find that man's pathway to glory is strewn with the bones of a horse.   -Anonymous

I've been on a road trip, returning to California from the Denver BLM meetings, driving through Sheldon Wildlife Refuge and other HMAs (herd management areas), and I will soon share with you some of the beauties I met there.

First, though, I must acknowledge Ahiga.  Meet the majestic, peaceable and solid Ahiga, the bay stallion on the left.  (To enjoy a larger photograph, just click on the photos.) 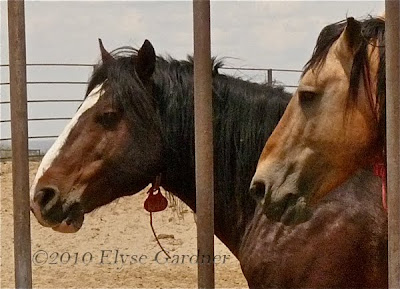 Ahiga, Tag No. 1844 (on left),  is seen here with his good friend, E'lami.
Ahiga was never gelded.  While we were sitting with BLM in Denver, he crashed and died fighting the confines of the chute, struggling for his freedom.  BLM "Indian Lakes Weekly Updates" from the week of June 14:

Gelding of the five years and older stallions took place this week.  During gelding, one stallion was noted with two cryptorchid testicles and was euthanized (#1475), one stallion suffered a spinal injury while in the chute and died on his own (#1844) and one gelding was found dead in the pen (#1699).

I am so sorry, Ahiga.

I know it sounds dramatic; it is dramatic.  Even when BLM is as understated as possible, and often they are, the horses are so very afraid and resistant.  Thank you to BLM for amending your "updates" and including the tag numbers of these horses, which should always be included.   BLM's attempts at depersonalizing these horses will fail, and people just become frustrated and more distrustful if that were possible.  We would ask that you please provide the ages of these horses in addition to the tag numbers. 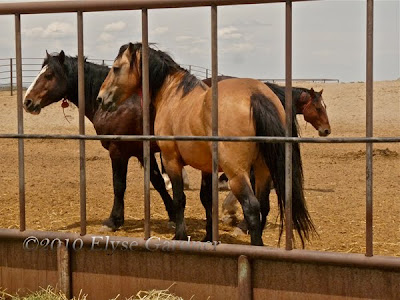 Ahiga is Navajo for "He Fights."
E'lami had a friend, and then his friend never came back from the chute.
But Ahiga wasn't a bully; he wasn't an instigator.  He was a mature stallion who was scared literally to death.   He accidentally killed himself using all his strength to escape what was the most terrifying thing of all for him.  Imagine someone  using every ounce of strength they have to break through a door and, God forbid, fatally breaking bones in the process.
I need to vent a little here. "Died on his own."  BLM had nothing to do with it?  Artificially low AMLs (Appropriate Management Levels), carte blanche for cattle, had nothing to do with it?  Number 1844, Ahiga, went and killed himself.  No real range data to justify calling 1,922 predominantly sleek and healthy wild horses "excess" had nothing to do with it?
At least five stallions have died in just three weeks, very likely more.  We don't know because BLM has not updated their "weekly updates" now, either.  They shut the doors to Fallon just in time; neither my camera nor yours can be present to see the mayhem that would ensue when they started gelding these older stallions.
Then they changed their "daily updates" to "weekly updates"; no public observers are there to contradict or observe anything BLM doesn't want seen.   They are supposed to update on Fridays, but adding insult to injury, we are left to wonder what happened this week.
BLM gets carte blanche.  "Carte blanche" means "white paper."  It means you get to write your own rules.  Whatever you want; you name the terms.  BLM GETS CARTE BLANCHE at our wild horses.  Does that sit okay with you?
Here's what carte blanche looked like last summer.

They are starting Owyhee in another week.
According to the Bureau of Land Management, they are starting roundups in the furnace of the summer because they want to accommodate the hunters, i.e., sport killing is more important than the safety of the wild horses.
It isn't enough that the horses are being run by helicopter, driven off their homes in fear and at risk, and losing freedom and family, but it has to be done when convenient for hunters.
Roundups are going to get very ugly.  I've been to Twin Peaks twice recently, and the hard, large pieces of rocks and pebbles cannot be described.  The wear and tear on the horses' feet will be phenomenal, especially the soft feet of the foals.

Past experiences with helicopter gathers during this prime hunting season have shown a significant conflict between the two activities. Hunters complained that the nuisance and noise from personnel and machines dramatically reduced the quality of their hunting experience. The BLM will implement stipulations to reduce heat stress to the horses and burros during the proposed gather, as discussed in Section 2.1.1. For these reasons, this alternative was dropped from detailed analysis. (Emphasis added.)

I am going to research Section 2.1.1.  and will amend shortly.
Okay.  I believe the pertinent part of this section below is what BLM is hanging their hat on.  They are saying they can keep the horses cool and dry by asking them to walk or trot.
Personally, I think it would be more reasonable to get a giant fan.

The horses and burros would be gathered at a slow pace, with animals moving at a walk or slow trot. The animals would be gathered into capture sites constructed of portable panels, and kept at these sites for up to one hour, before being transported to temporary holding facilities (see Map 1). Up to 100 animals at a time would be kept at a capture site for a short duration.

Here's my challenge.  BLM and contractors Cattoor are asserting they can round up horses at a slow, gentle pace.  They say they can keep the horses from running.  Prove it.  Mount a real-time video camera on every single helicopter every time, with a video feed to the trap site where I or another public observer can monitor it.  No turning it off.  Take us with you in this way.  And then let me get close enough  to document their condition when the horses come in.  Let me stand with your vet.  This is a highly reasonable, do-able proposal.  Are we on? 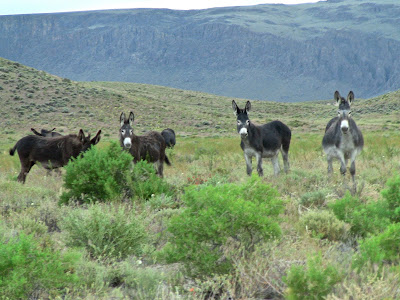 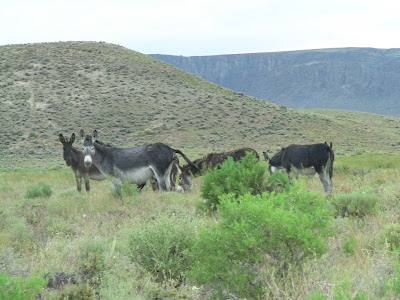 This kind of work that I do gives me a different view, and when I see these animals now I experience grief because BLM has stamped "excess" across most of them, meaning the helicopters are gearing up to take them away from their homes while the cows and sheep, bless their messy little hearts, are at "home on the range." These little donkeys are pretty special.
To help our wild horses, we get great information from The Cloud Foundation TheCloudFoundation.org.   In Defense of Animals (IDAUSA.org)also has a great web site also where we can fill up on information and/or action for or be contacted by emails when different strategies are going on for you to see.
Time to go now.  More soon.
Please let your voices be heard by the White House.
Nickers,
Elyse Gardner
Humane Advocate Observer

Injured wild, young stallion I haven't seen since late February/early March before the chute system was finished and before the horses were identified with tags and brands. He appeared to have a broken leg.  He disappeared. 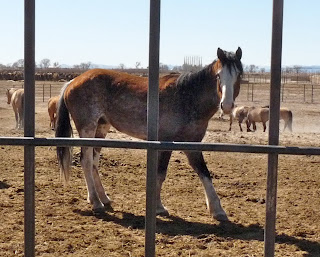 Posted by Humane Observer at 1:15 AM