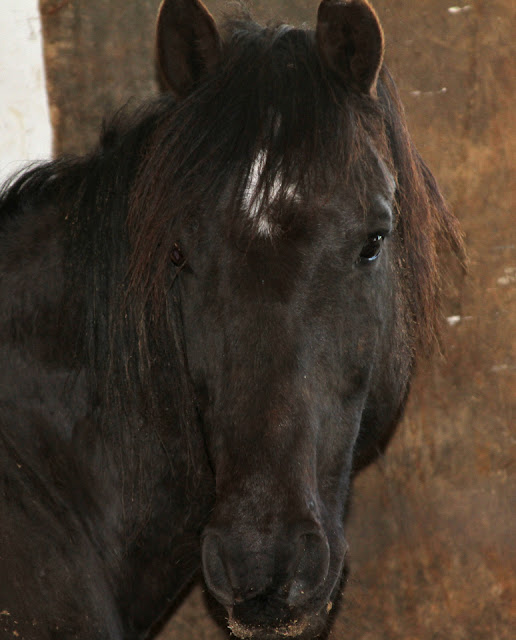 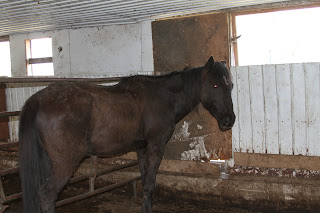 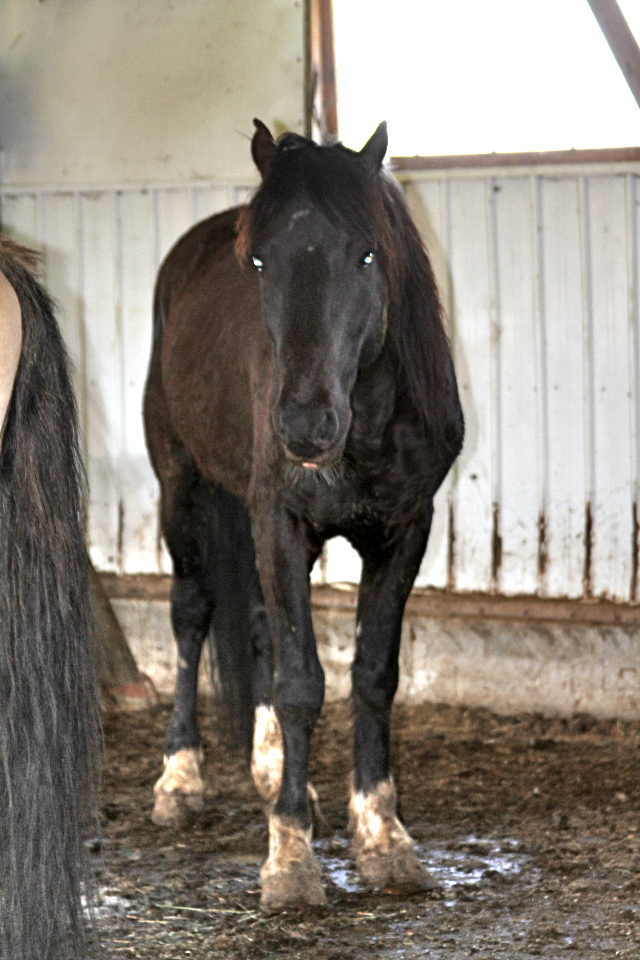 I was very moved by these communications I received from a couple of the generous-hearted/handed people who fostered a three of the starving Twin Peaks horses in Michigan  — and I know it sounds dramatic, but these horses really were starving; I do not say that lightly.  I wanted to simply share these with you...
And as you read, know that they are leaving today for California. Coggins tests were done (a required blood test in order for horses to cross state lines), the horses were all brought to one location, and their trek home will be starting very soon.  Thanks to you... 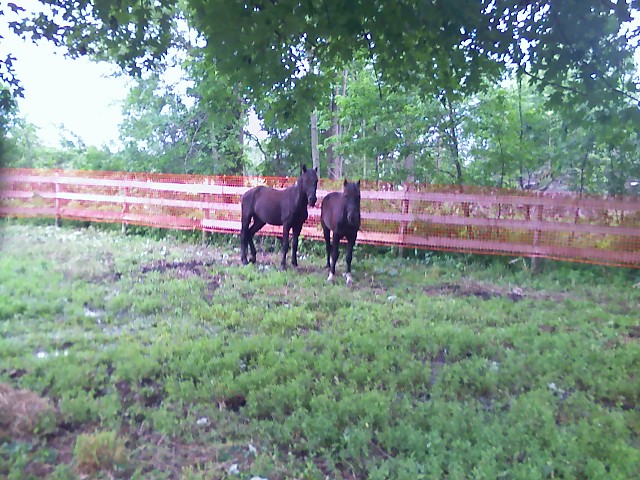 I was forwarded an e-mail that contained the link to a blog about the Michigan Mustangs that are leaving this week back to California. My name is Joy Aten, and having done mainly TB racehorse rescue for years, I was thrust out of my comfort zone when I was needed to help with the Mustangs. It was truly heart breaking...yet amazing...to be in their presence, if only for a short time. I shared my heart and my home with Black Onyx and Cortez from June 22 to September 2. I quickly discovered how unique these wild and glorious creatures were, and decided to keep a journal of the "boys". I copied and pasted some of it for you below. Thank you so very much for your loving care and concern, and for doing what you can to let others know of this story of tragedy and triumph. I pray for the return of the other Michigan Mustangs to California soon.
Best,
Joy Aten
Hudsonville, Michigan

Their first few weeks with me, Onyx was very timid, always keeping Cortez between himself and me. At the end of their stay, Onyx would place himself closer to me. While I cleaned in their paddock and lean-to (which they would both stand in after about 3-4 weeks…Cortez tried it before Onyx, and at first, would only put his front feet in),  they would both come and stand close to me as long as I didn’t face them directly. Onyx would be 12-18 inches from me, with Cortez on the other side of him. I could move about cleaning up manure/hay, and they would just quietly stand there. I never touched them the entire stay, but I am sure they would not have allowed it if I had tried. There were times that I asked them to move away, as I needed to clean up where they were standing. Once Onyx kicked out at me with both hinds as I must have bustled about too fast to suit him. But if I just clucked, they would slowly move away.
Ten weeks have past since the day they stepped cautiously out of the trailer and into my heart. Physically they have blossomed...their former dull, near-black coats now glisten in deep shades of rich, chocolate brown. I'm amazed at how they shine, given the fact that not one time has a brush touched their compact bodies. The bony prominences are gone, and the neglect they once endured is no longer evident. Yet all is not well with them. My own horses were in close proximity (not over a fence, but in range where they could easily see each other), but Onyx and Cortez never paid any attention to them…it was almost as if they weren’t even there. It was odd, especially because my horses would daily come to the corner of their own paddock to get as close as possible, straining to see what Onyx and Cortez were up to. But the two were indifferent and uninterested...there was never any playing or bucking...no running for the sheer joy of it...nothing.

I have cried many tears for them, watching them in an enclosure where they didn't belong and in an environment they could never thrive in. An entire year has past since their lives were stolen from them, yet the troubled and unsettled look remains in their eyes...it is unlike anything I have ever seen. But at last, they are going home. I will miss them - I will hold them close forever - I will never stop telling their story.

—o0o—
My deepest thanks to Joy for (1) making her home and world a haven for these lost, starving animals who don't know their place anymore in the world (thank you, DreamCatcher that will soon change); and, (2) sharing her observations, insights, and heart.
Here are Duke and Cortez in June 2011.  We can see how bony Duke's croup (bony prominence/final third of his back approaching the tail) and pelvis are becoming, and how his withers (hump where a horse's neck joins his back) protrudes; and how very thin Cortez already is. 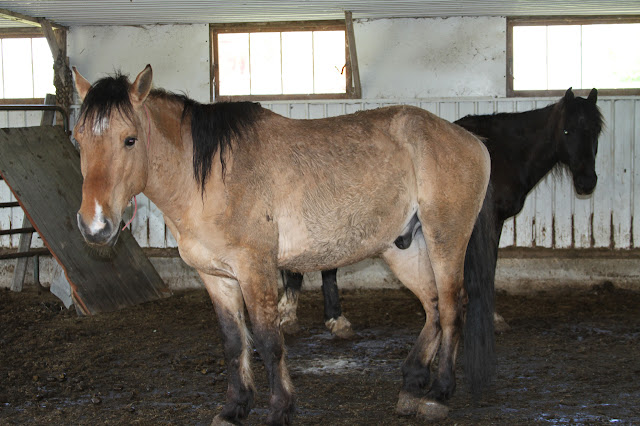 And now here are some unsolicited, very much appreciated comments from Linda Jackman, who fostered Duke for the last two months. . .


Thought I'd share these photos of Duke, taken just minutes before he was loaded yesterday.  Isn't he just the most handsome boy ever? 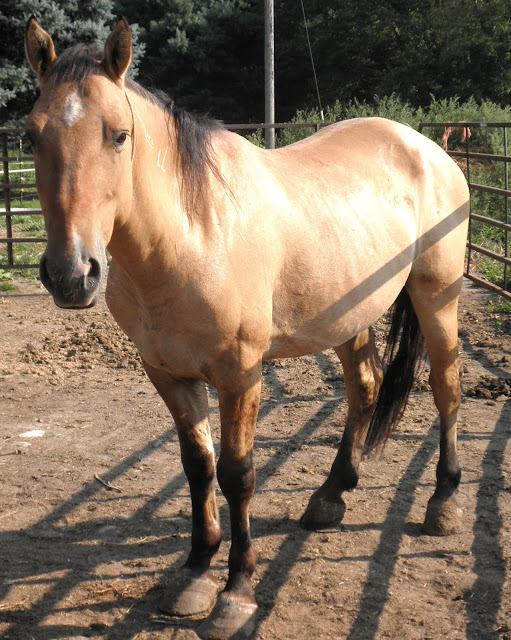 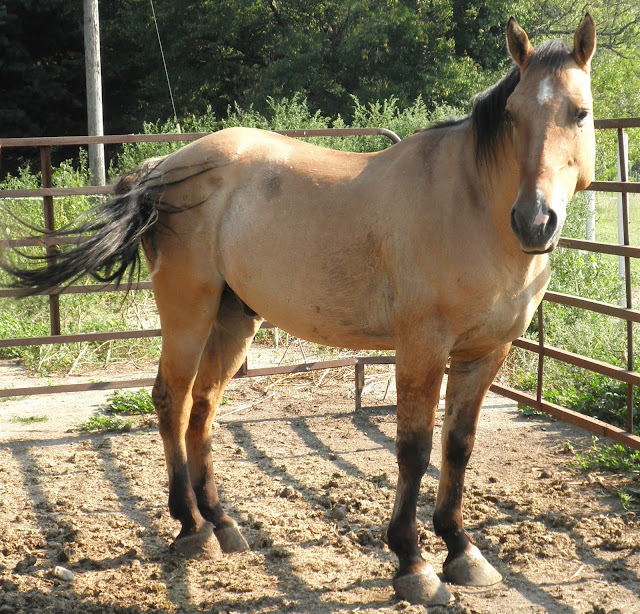 Just food for thought.... If anyone is hitting the "kill" pen on Friday mornings at Shipshewana and they run across a BLM mustang in the kill pen, we will take it in, for that matter any horse that needs saving..... I am feeling very needy today.... I just miss Duke so much, it's amazing even tho we only had him a short few months, what a impact he had on my life and he taught me a thing or two as well...
As of 9 a.m. this morning, September 9, 2011, they are on their way home...


Thank you, Joy, Linda and John, all the foster guardians; Jodi Louth and the Michigan Horse Welfare Coalition, who has been amazing, for everything you are doing for the horses.  God bless you each in all you do.
For the wild horses all, captive and free, and their humble burro friends,
all those who were, and those yet to be,
Nickers,
Elyse Gardner
PRESS RELEASE
Wild Mustangs in Michigan Head Home to California
September 9, 2011 – For Immediate Release

The Michigan Horse Welfare Coalition (MHWC) announces the shipment of nine wild mustangs from a location in west Michigan to the DreamCatcher Wild Horse and Burro Sanctuary in California at approximately 9:00 am this moring, Friday, September 9th, 2011.  The shipment of eight adult mustangs and one foal is expected to arrive at the northeastern California sanctuary approximately 48 hours after departure.
The eight adult mustangs were part of an original shipment of 29 mustangs to Allegan County, Michigan in February of 2011. The mustangs were purchased by Wendi Bierling for approximately $20 each from the Bureau of Land Management (BLM) after being captured during a roundup in California in August of 2010.
In May of 2011, Bierling contacted the MHWC Hay Bank for assistance in feeding the horses, but her application was denied after it was discovered during a mandatory site visit by MHWC volunteers that many of the horses in Bierling’s care were allegedly being grossly neglected, violating Michigan’s anti-cruelty statute. It was also discovered that Bierling allegedly intended to breed the mustangs, which is against MHWC’s policy for hay assistance
The MHWC contacted Allegan County Animal Control, which prompted an investigation and subsequent charge recommendation that Allegan County Prosecutor Fred Anderson refused to pursue. Approximately 16 of the mustangs remain under Bierling’s care and control despite numerous offers from the public to rehome the horses.
“It was a bittersweet moment, watching the mustangs pull away in the truck this morning. We’re so happy for the nine that are going, but sad for the ones being left behind,” says Jodi Louth, Hay Bank Coordinator for the MHWC.  “All 29 mustangs and their foals should have been on the truck to California today.”
Barbara Clarke, wild horse expert and director of the 2,000-acre DreamCatcher Wild Horse and Burro Sanctuary in Ravendale, California, contacted the MHWC after hearing about the plight of the mustangs and offered them a permanent home as soon as the horses were healthy enough again to travel.
“We are only twenty miles from the Twin Peaks Horse Management Area where these horses were thriving prior to the BLM rounding them up,” says Clarke.  “We’re thrilled to have the opportunity to bring the horses back home where they belong and in an environment they are familiar with.  After all they have been through they deserve their freedom back.
View public facebook photo album of today’s events here (higher quality photos  available upon request).  The MHWC grants permission for any media use of photos.
View two short YouTube videos of horses leaving here:
http://www.youtube.com/watch?v=3lmj0Jusb4c
http://www.youtube.com/watch?v=oBC2qlnd9go
The Michigan Horse Welfare Coalition is committed to enhancing the lives of all equines in Michigan through education and assistance to the owners, and when necessary, the prosecution of persons who commit acts of cruelty against equines contrary to existing laws.
###
Posted by Humane Observer at 1:37 AM