KEELEY AND EIGHT OTHER TWIN PEAKS HORSES STARVED IN MICHIGAN ARE COMING HOME TO CALIFORNIA— THANKS TO DREAMCATCHER SANCTUARY, GENEROUS SUPPORTERS, and MICHIGAN HORSE WELFARE COALITION
(My earnest gratitude to Jodi Louth of the Michigan Horse Welfare Coalition and other committed California advocates for making their photos available to us.) 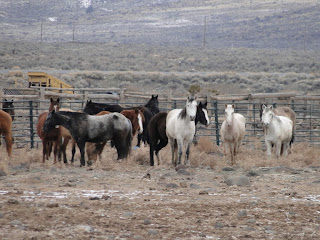 MEET Keeley the day after her capture from the lush Twin Peaks, California wild horse range.  Notice (above right photo) the nicely rounded hip, the little heart-shaped indent in the middle of her spine (just to the right of her left eye) illustrating how filled out she was, how the muscle and flesh thoroughly cover and pad her spine.  This is a healthy horse "in good flesh." 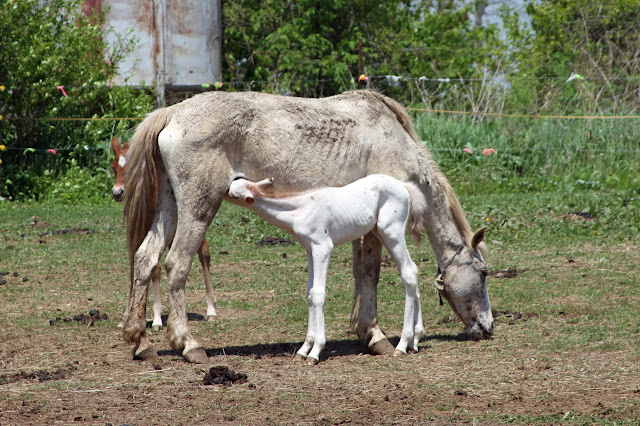 Keeley managing to sustain her new foal,  Firehawk, 4 months later in Michigan, where she was allowed to starve along with most of the 28 other horses bought by Wendi Bierling.  Seriously underweight, her spine is clearly visible here and we can count individual ribs.  Her skeleton is evident and there is no curve or roundedness remaining anywhere.   This was the typical look of most of the horses left in Wendi Bierling's care.

FINALLY, an update on the Twin Peaks horses stranded in Michigan.  Of the original 29 horses who were sold to a woman in Michigan — claiming to have homes for them but who ended up abysmally neglected and starving —  eight horses and a new foal will next week be heading to west their forever home at for DreamCatcher Wild Horse and Burro sanctuary.
While the Allegan County Sheriff recommended prosecution of Wendi Bierling for her failure to care for or obtain veterinary care for these animals, the Prosecutor failed to act, and Ms. Bierling retained control of most of these animals.  She still has a chance to do the right thing by facilitating the return of the remaining horses in her control.
Two of the original 29 lost their lives in Michigan (see my earlier blog at Updated: Twin Peaks Horses Stranded and Starving in Michgan...)
Barbara Clarke, Director of the northern California, 2,000-acre wild horse and burro sanctuary, has worked hard and is committed to restoring the lives of the remaining horses by getting them home — or as close to home as possible.  DreamCatcher is only 20 miles from these horses' wild habitat which they were chased from by helicopter in August of 2010.  I defer to Barbara; let's hear it with her own words in this UPDATE she publicized on August 30:

UP DATE
Aug 30, 2011
Twin Peaks Horses Set to Come Home
Despite a plethora of obstacles determined to prevent the return of the Twin Peaks horses to California, we now have 3 geldings, 4 mares and one mare/foal pair set to head west.  If...we can raise the rest of the transport money.  And in these tough economic times this is going to be no small feat.
So we are going to sweeten the deal by offering a Catherine Scott photo of the Twin Peaks horses to any donor giving at least $100 and for donations of at least $1000 a VIP tour of DreamCatcher, participation in our 2012 spring release of the horses onto summer grazing, and two night stay at the resort in Eagle Lake (donated) which is only 20min away.
We have been able to reduce the transport costs from $18,500 to $10,500 and we have already paid a nonrefundable $1000 deposit.  The final quote was given to us by Bob Hubbard Equine Transportation and includes a large and comfortable van which they are going to retrofit for the mustangs.  Hubbard is scheduled to pickup the horses in Michigan September 9 and they will arrive at DreamCatcher approximately 2 and a half days later.  Once here they will be immediately released into a large pasture area where they can run. roll and enjoy some freedom amongst the sights and smells they are familiar with.  They will be back HOME.
Those wishing to help us bring these horses back home may donate:
Remember, this is a time sensitive situation since horses are scheduled to be picked up September 9th in Michigan.
The horses who are returning to California are listed below and you can see some photos on this link http://wherethewildhorsesare.blogspot.com/
# 1765 Keeley - red spot appy mare with appy colt
# 1994 no name - buckskin mare - dun colt not coming
# 1981 Jewel - sorrel mare
# 1755 no name - drk grey mare w/black mane - colt not coming
#  2006 chocolate brown pinto mare w/white spot on left side
# 1598 Duke - light dun buckskin gelding
# 1557 Onyx - black gelding star & cropped ear
# 1523 Cortez - black gelding w/4 white socks
While we were not able to get possession of the rest of the horses at this time, we - along with the Michigan Horse Welfare Coalition - will be monitoring the situation and will come to the aide of any of the horses that may need us in the future.  We will not give up until we know all of the Twin Peaks horses are safe and happy.
Thank You For Caring
Barbara 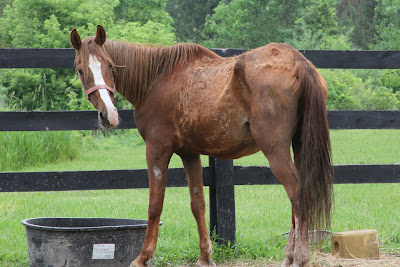 Left:    Jewel at her worst, and getting ready to foal.  Her foal didn't survive
Right:  Gaining weight and strength, ready to make the trip.  Hang in there, Jewel, you are almost home.

LATEST UPDATE
AS OF September 1, 2011, generous, caring people have taken action, and the $10,500 has more than been reached.  We cannot thank you enough!
If you still would like to be a part of restoring these horses and providing for their ongoing maintenance — the most expensive part of owning a horse — the invitation to give still stands, and so do the Thank-You Gifts as stated above, i.e.,  the tour of DreamCatcher Wild Horse and Burro Sanctuary, participation in the summer pasture release, and the Catherine Scott photo of the Twin Peaks horses to those who give as indicated above.
Additional donations will be used to purchase extra hay, put up new fencing for the new arrivals, and, best of all, some put aside for another future group of Twin Peaks horses stranded in Michigan to return home.  There are already stirrings in that direction, and we are committed to bringing each and every one back we can.
You can view the list of returning horses along with some photos at the Where the Wild Horses Are blog.
PERSONAL UPDATE
To my readers:  It's great to "see" you again!  This blog has been "silent" since July, but I have continued engaged for the wild horses as well as more personally involved with them than ever.  I have departed from California and am currently in Colorado in a remote area with inconceivably slow internet where it is difficult to even load photographs on this blog and nearly impossible to watch Youtube videos.
But I am here with my mustang filly which BLM shipped all the way from Nevada to Nebraska back in May 2010 despite my being actively engaged in adopting her; that is another story I will share with you and Congress at another time.
Please do check in periodically as I will be updating and posting.   And the links at the front of this blog are vital in helping us continue to take action on behalf of the wild horses, who need us more than ever as BLM contemplates creating "nonreproducing herds" using permanent infertility methods (i.e., releasing large populations of geldings and/or spayed mares, a dangerous and costly procedure), which of course make these horses no longer wild populations, and thus BLM would be in violation of the law they are charged to carry out, i.e., managing wild horses in the wild with "minimum feasible" (the legal language) interference.
For the wild horses, captive and free, and their humble burro friends,
all who were and those yet to be,
Elyse Gardner, Humane Advocate Observer
Posted by Humane Observer at 11:30 AM