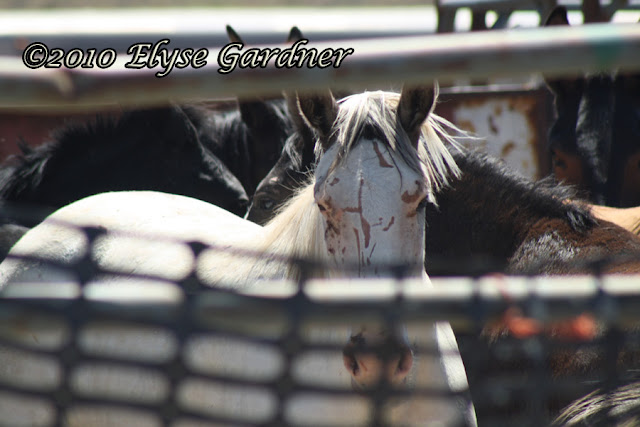 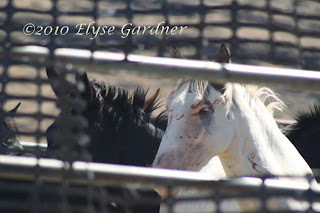 ABOVE and LEFT PHOTOS: TWIN PEAKS MEDICINE HAT:  This horse is over 10 years old and in (CORRECTION) his prime.  He is cut up from the roundup — either from the chute, loading into the trailer, or during the trailer ride itself.  These two photos were taken a day after he was driven in by helicopter.

He has multiple cuts and bruises, but look at his graceful curves and lines, his elegant beauty and self carriage.  You can feel the life in him, and his robust vigor and health are evident.

BELOW:  Can you believe this is the same horse 10 months later?  This horse I call White Magic Mist is now languishing in a Michigan pen and facing possible shipping to Florida.  Note the protruding hipbone. 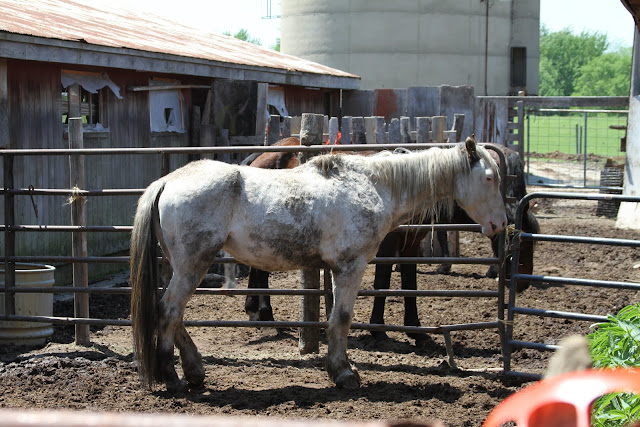 So this is White Magic Mist 10 months later.  Let's bring (CORRECTION) him  home.

29 "sale authority" Twin Peaks wild horses began their serious decline in health February 2011 as they arrived in Michigan, shipped by BLM to Wendi Bierling who has a "Sale Authority Mustang" Group at Unbridled Spirit Ranch.  Apparently they started out with a 28-hour trailer ride with no food or water during that time.  Ms. Bierling states she had adopters who fell through.  I don't think she intended harm, but however it happened, she wasn't able to care for them adequately.
More Twin Peaks Horses from Unbridled Spirit Ranch in Michigan
These horses have been in the news because they deteriorated so badly that by the time Wendi Bierling asked for help, body scores of 1 and 2 were seen among a number of formerly stunning horses Ms. Bierling saw on my and others' blogs.
TWO MARES HAVE DIED
One mare escaped from where she was housed and was shot by a police officer as she was running along a freeway, her mustang legs having carried her brilliantly through the roundup only to lay slain on a Michigan road.
Before anyone criticizes the officer, I have to say that at that point, that was probably the kindest thing the officer could have done.  The point is:  Things should never have come to that.
The other mare, who had recently foaled, was cast in her stall.  In an incompetent attempt to help her, this mare's neck was broken when people used a rope around her neck and tried to pull her out enough to get her legs underneath her.  She was then apparently shot to euthanize  her.  ("Cast" means while laying down, either from rolling or resting, an animal is unable to get her legs back underneath herself to rise because one or more of her legs are either under a fence or too close to a wall so she can't flip over.) This mare left an orphan foal behind.  I do not know if this mare was being fostered or in Ms. Bierling's care.
However, in a fellow advocate's thorough, well-documented blog, Where the Wild Horses Are, more details on these horses are provided by someone who has diligently followed them and has documentation of them before and after landing in Wendi Bierling's care or lack thereof.  Please be sure to come back (or stay) to the end of this post, however, for timely information and vitally  needed action for the best chance TO GET THESE HORSES HOME.
WHERE THINGS STAND
After law enforcement had begun its investigation, arrangements were being made to foster the horses elsewhere until they were well enough to travel.  Authorities seemed ready to work with us, but it has all fallen apart since the Prosecutor's Office isn't taking action.  Unfortunately, it has come to this:  charges will have to be filed if these horses are to be protected.  Most people agree that bringing them home, to the country they know and the feed they are accustomed to, would be the horses' first choice and best for them.
I will tell you how we can help these horses.  Below is a video of them in their current circumstances so you can see they really are ready to come home to permanent sanctuary in California, and you can help that happen — and no, this isn't a pitch for money although any sanctuary can always use donations.
UPDATE
(Correction: It's Lieutenant Baker, not Sgt. Kuhn.)
ALTHOUGH in a telephone conversation Lieutenant Baker confirmed to me that he has recommended that charges be filed, and this case now sits in the hands of the Allegan Prosecutor Fred Anderson, there is in fact more Lieutenant Baker can do though he is reluctant to do so. THE PROSECUTOR SHOULD BE TAKING ACTION AT THIS POINT.  However, Lt. Baker:
Therefore, it is not a far leap to state that additional charges of abuse could and should be filed were Ms. Bierling to effect such a sale at this time.
Importantly, Lt. Baker appears to have a duty to seize these animals and arrest and/or charge Ms. Bierling without warrant, as MCL 750.53, states since he has knowledge of an action she is about to take that would likely be a continuance of alleged criminal neglect and abuse, i.e., subjecting them to such a trip in their current debilitated condition.
Michigan Law requires him to act, and if he does not, he himself may well be guilty of a misdemeanor.


MCL 750.52 Duty to Enforce Provision - This statute provides that it is the duty of the officials involved in animal cruelty investigations to arrest and prosecute those committing the offenses where there is knowledge or reasonable notice of the acts.  The failure or neglect by an officer involved to do so may result in a  misdemeanor.

MCL 750.53 Search and Seizure Provision - This statute provides that a person violating any of the animal cruelty statutes may be arrested without warrant, similar to the arrest of those found disturbing the peace.  Further, the official making the arrest has a duty to seize the animals involved and place them in the custody of the juridiction.

I personally heard (CORRECTION) Lieutenant Baker to be very concerned about these animals, but perhaps he needs to be encouraged to step out while Attorney Anderson sits on his hands.  The Sheriff doesn't always have to wait for the Prosecutor.  We all know when law enforcment sees laws being broken and wrongs being done, they act, and let the attorneys figure it out in Court.  I believe these horses' plight and possible dismal future, what with the abundant illegal slaughter known in Florida,  and the law require Lt. Baker to act unilaterally in this case and force Attorney Anderson's sat-upon hand into action.
Lt. Baker's number, if you have questions for him, is 269/673-0500 Ext. 122537.  He is recommending charges be filed and is waiting for the District Attorney to act.  This man seems a friend to the horses, so let's just help him do what's right and address him with the utmost respect.  He has already done a lot for them by pressing for charges.
Unfortunately, this is all necessary because Ms. Bierling is not communicating, not returning my calls or Jodi Louth's from the Michigan Horse Welfare Coalition, and her telephone appears to be off the hook.  I had hoped she would work directly with us to get these horses back home since right now since she claims to care about them, and she is still, ominously, the legal owner and can sell the horses, a number of whom are still in her custody and care although we were told they would be fostered out (and some are).


This baby didn't make it.  Jewel, his mother, was emaciated and fostered out for care. 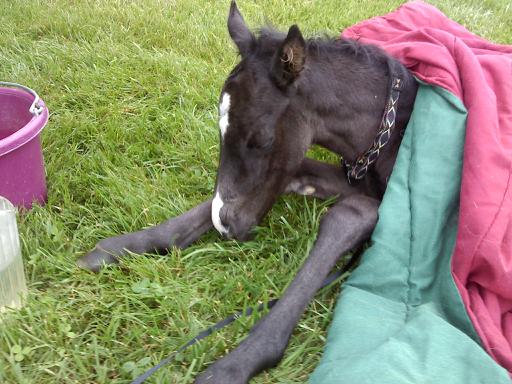 Photo by Jodi Louth
He was apparently rejected by Jewel, who was so skeletal when the baby was born, she probably instinctively knew she didn't have enough in her to sustain a baby and survive herself.  The foal wasn't found until he had already gone without nursing for a full 24 hours.  Again, you can read more details of his story on Where the Wild Horses Are.
DreamCatcher Wild Horse and Burro Sanctuary has offered to bring these displaced horses home and give them permanent sanctuary with River and Dahlia and the other Calico girls, and the other fortunate horses and burros there.  The Michigan Horse Welfare Coalition is working with us and has been a good liaison to Michigan law enforcement to help bring these girls home.
BUT THESE HORSES ARE NOW IN JEOPARDY OF BEING SHIPPED TO FLORIDA.
Allegan County Prosecutor Fred Anderson is dragging his feet, and as a result these horses may be sold by Ms. Bierling.  A reliable source has informed me that Ms. Bierling has plans to sell a number of horses to a man coming from Florida on Saturday, July 2, to take "a bunch" back with him, and others dispersed elsewhere, two to North Carolina, and a number in Florida for breeding.
HOW YOU CAN HELP:  TELEPHONE CALL
269/673-0280  Prosecuting Attorney Fred Anderson
It's time for us to press the Allegan County District Attorney Prosecutor Anderson to take action.  We can only leave messages between 8 a.m. and 5 p.m. Eastern time.
He is the head Prosecutor in Allegan County; the buck stops with him.
What we are asking for now:
1) That he immediately follow through on Lt. Baker's recommendations and file charges, thereby authorizing the Sheriff's Office to put a freeze on any transfers of ownership or any movement of these horses and stop any out-of-state transport of these horses until a determination is reached.
Ms. Bierling is still the legal owner of these horses, and since she has stopped communicating and is about to remove the horses from anyone's sight by the sale to a Florida man, this needs to happen immediately.
2) To assign Michigan Horse Welfare Coalition (MHWC) as overseeing conservator of all the subject horses to protect them, and to remove all the remaining Twin Peaks horses from Ms. Bierling's custody, including White Magic Mist.
Lt. Baker assured me the Sheriff's Office is monitoring the horses; we would prefer to see the MHWC doing the monitoring.
3) That he facilitate the return of the Twin Peaks wild horses to DreamCatcher in northern California, at virtually no expense to Allegan County.  Since DreamCatcher has offered to put up a care bond to defray Allegan County's costs — since they seem so concerned about the costs — Prosecutor Anderson has no excuse not to act.
HOW YOU CAN HELP:  EMAIL
Here is a convenient copy-and-paste email chain to the Allegan Sheriff, Animal Control, Prosecutor, and Fox News, who covered the story.     Please send a polite short letter (or long if you wish) email to these people/organizations and let them know you want theses horses protected from sale outside Michigan at this time, that charges need to be filed, and that DreamCatchers and the advocate community stand ready to help. 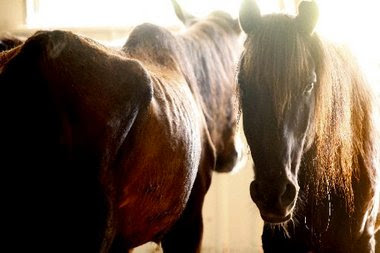 Thank you for taking action.
For all the wild horses, captive and free, and their humble burro friends,
Those who were, and those yet to be,
Elyse Gardner