SHELDON SPAYED WILD MARES VIA THE ANUS: IS THIS WHAT WYOMING MARES ARE FACING? and REVISITING BLM'S INFERTILITY RESEARCH UPDATE FROM PHOENIX 3-10-11 ADVISORY BOARD MEETING 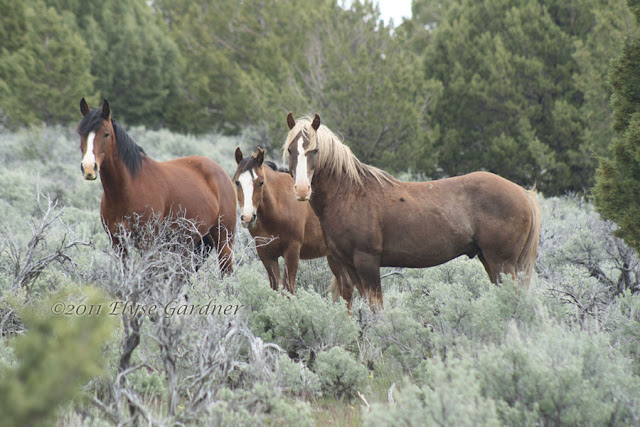 BLM WYOMING WAS JUST ITCHING to create the first nonreproducing herds, a concept I first saw in a FOIA'd (obtained by citizens through the Freedom Of  Information Act)  BLM document from October 2008.
Dr. Pat Haight of the Conquistador Equine Rescue and Advocacy Program (CERAP) had uncovered, via this document, a chilling plan by BLM to kill many thousands of healthy horses in holding and call it "euthanasia," as well as the internal notes taken by Lili Thomas, the "Implementation Team" leader, of the multiple conference calls the "team" had which ultimately led to the document.  I find Lili Thomas's "Implementation Team Conference Call" notes to be the most telling (click on the link to view the document).
It is an internal BLM document entitled,  Alternative Management Options, and we are now seeing more and more of the disturbing "options" carried out by the Bureau of Land Management and Forest Service.  Please click on this link to see BLM's Final Solution for the Wild Horses and Burros, Attorney Laura Allen's analysis of this very troubling document.  You can see Dr. Haight's helpful summary of this document, also, for an overview of its contents.
I notice John Neill was to, among other things, "talk with Nevada on how they can justify zeroing out a herd, but are able to maintain a nonreproductive herd."  He will also determine "what this will buy the program, how many horses would be on these areas and how does this help?"
Congress needs to read these documents.
I do not like making extremist-sounding statements, but speaking truthfully, it seems these agencies charged to protect and manage wild horses and burros will do nearly anything rather than allowing the wild, free-roaming horses and burros to remain wild and free roaming as the — guess what — Wild Free Roaming Horse and Burro Act of 1971 mandated.

Specifically, in the years following that 2008 document, we have been seeing:
all purportedly to "maintain a thriving ecological balance" for "multiple use" purposes.

However, when we see a mining interest "multiple user" toxifying far more groundwater in the Herd Management Areas in one month than 10,000 wild horses could drink in a year; and we realize thousands of cattle and sheep, outnumbering wild horses and burros by five to one in the Herd Management Areas, are devouring over half the vegetation, then the light dawns and the BLM mantra of removing these animals "to maintain a thriving ecological balance" and "multiple use" rings hollow, and BLM loses virtually all credibility. 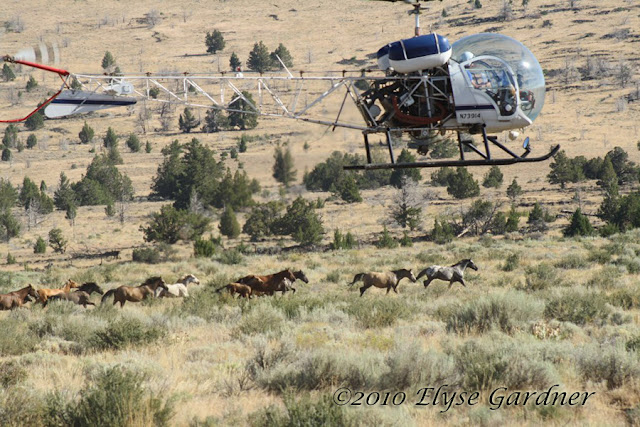 These constant roundups, skewing gender ratios, creating public lands zoos with sterile wild horse herds, are all practices antithetical to the nature of the wild horses.  With no prior research, the Wyoming plan to create nonreproducing herds turns the entire HMAs into giant Petri dish experiments whose repercussions are likely to impact individual horses as well as the band and herd severely.
When I saw Wyoming BLM's decision to proceed with creating the two sterile, nonreproducing herds, which meant introducing the dangerous, ill-advised practice of sterilizing wild mares through hysterectomy or ovariectomy, I recalled three things:
1)   A conversation I had in September 2010 with Paul Steblein, Director of the Sheldon-Hart National Wildlife Refuge, wherein I learned about their sickening experimental hysterectomies through the anus on wild horses in that beautiful refuge, a practice I've not heard used or even mentioned anywhere else; (remember, they are not under BLM jurisdiction);
2)  Dr. Al Kane's March 10 "Research Update" presentation to the Wild Horse and Burro Advisory Board wherein he spoke of the various infertility experiments taking place and planned.
3)  The FOIA'd internal BLM document, Alternative Management Options and Lili Thomas's "Implementation Team Conference Call" notes of the meetings which were the basis for it.
IN TERMS OF HYSTERECTOMY, intrinsic to BLM's goal of nonreproducing herds, here is a video I put together from Dr. Kane's March 10 presentation to the Advisory Board.


...they are to be considered in the area where presently found, as an integral part of the natural system of the public lands.

Yet they are treated as unnatural, made to be incidental, their family-life-centered society considered expendable and irrelevant to the life of the mountains where they live.  No, I think BLM had best prepare to scrap the nonreproducing herd idea.  It tortures wild horse society beyond recognizability, creating Salazoos on public land, which is clearly not why Congress took the time to craft the 1971 Act.
FINALLY, as I mention in the video, Sheldon-Hart Wildlife Refuge Director Paul Steblein told me Fish and Wildlife Service did experimental hysterectomies through the anus on (CORRECTION) 30 wild mares, something I have never before heard of.  When Dr. Kane refers to the Sheldon study, he talks about colpotomy (or culpotomy) and states it's an approach through the vagina.  So which is it they are planning to study?  Which are they planning to do?
Paul Steblein said they had a 10 percent death rate which was reduced after they had "perfected" the procedure.
He said they released the mares quickly, usually within two days, to avoid exposing the horses to illnesses which often occur when horses are kept in large groups. This early release precludes the followup which prudent veterinary care — and certainly which any study worth its salt — would seem to require.  I understand dealing with wild populations presents challenges, but two days?
I note that according to the FOIA'd notes obtained by Dr. Pat Haight re the 2008 BLM internal meetings,  Dr. Sanford, the vet at Broken Arrow for the Calico horses, spayed about 12 mares in the early 90s, and there was a 30-day to six-week recovery period.
I am researching to learn which approach the research team plans is studying/plans to study and plans to use.  This is over the top...   Thus far, I know we have the following concerns:
Failure to adequately track the horses to learn of the efficacy of the practice isn't acceptable;
Failure to administer post-surgery antibiotics endangers the lives of every horse.
BLM is smart to call for a re-think on its Wyoming plans.  They were about to step in it up to their hips. 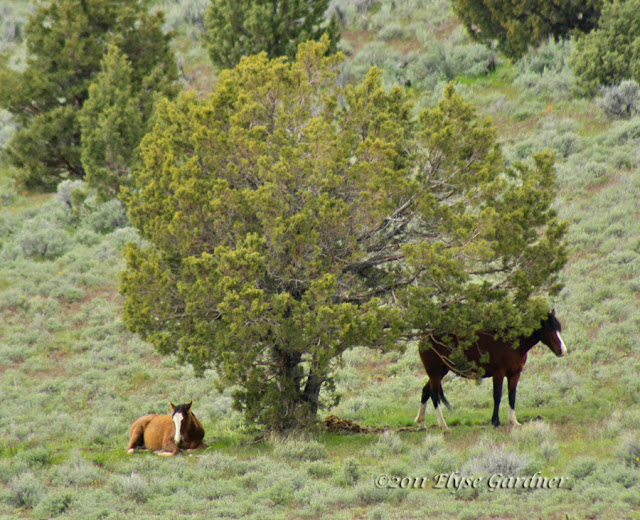 Twin Peaks Mare and Yearling (Same family as above)

ABOUT THE "SAFETY" OF THE "HYSTERECTOMY" PROCEDURE:
Dr. Kane referred throughout his presentation to the "hysterectomy"; nevertheless, I do not believe he means"hysterectomy" since that literally means removal of the uterus.  He appears to be describing ovariectomy, removal of the ovaries. 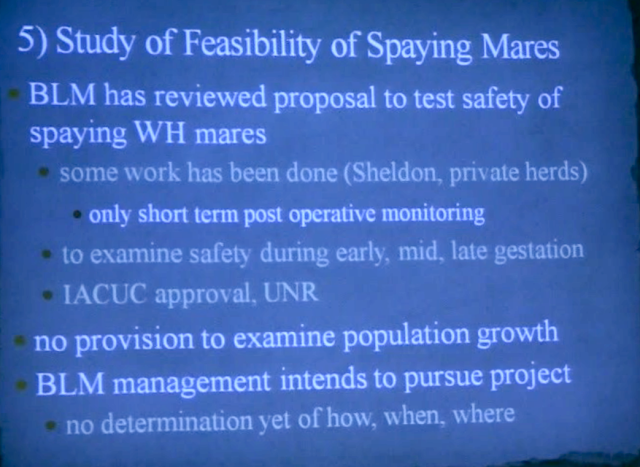 QUESTIONS:
Notice Dr. Kane's presentation is entitled, Study of Feasibility of Spaying Mares (emphasis added)?  Now, this presentation was March 10, 2011, only three months ago.
How did they leap from the beginning stages of research, a study with "only short-term post operative monitoring," to full, on-the-range implementation of these experimental procedures in two HMAs in Wyoming?
Only short term post operative monitoring was glossed over.  This means in the Sheldon and other studies, they haven't followed the mares and don't know how they fared.
Please note that no provision has been made to examine population growth in these studies.  They haven't progressed beyond the procedure itself.  Chairwoman Robin Lohnes made a point of this, as well, saying basically, "isn't population growth the issue here?"
I also note the last item, that as of then (March 10, 2011), there was no determination yet of how, when, or where the studies would be done.
Dr. Kane glossed over the troubling overhead text which stated:

First, how are they proposing to "examine the safety" during gestation? Remove the ovaries of mares in various stages of pregnancy and see what happens?  See if they abort?    Imagine removing a woman's ovaries while she is carrying a child.
Will they provide post operative pain medication for these horses?
What horses will they experiment on?  How will they be selected?  What is the aftercare they will be given?  Will they be kept with other horses?
Who will perform the procedures?
Where will these procedures be done?
What procedure will be used?
Are they considering doing the through-the-anus procedure Paul Steblein described to me?
Are we in fact talking ovariectomy?  Either way, these are pregnant wild mares we are talking about stressing.  I will be looking into the details. 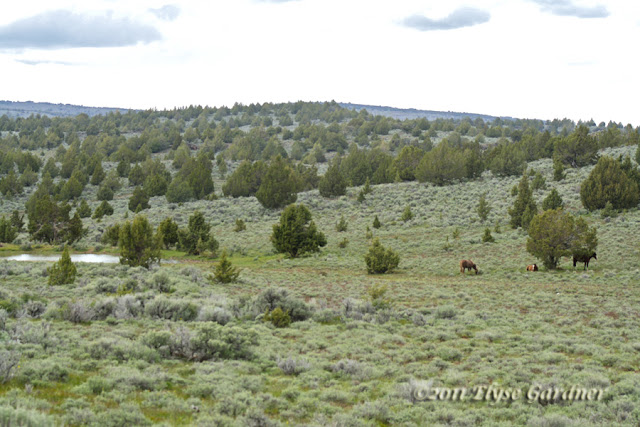 Beautiful Twin Peaks family in idyllic HMA, but where are all the other horses?  Very few remain on this California HMA full of cattle and sheep.
People sometimes suggest, "Why don't they just geld all the stallions, or geld most of them to effect population control?"  People are tempted down this road because gelding is so common and accepted, but this approach reminds me of someone who lost their keys in an unlit parking lot but searches for them under the streetlight on the corner because they could see better.  Sure, it's easier, but it doesn't come close to getting the job done.
Gelding the stallions to decrease population growth yet maintain a healthy, viable, self-sustaining wild horse population on public lands is a fallacy.
In terms of "population control," the first and most obvious problem with this is all this accomplishes is severely depleting the gene pool, setting up what was a healthy wild horse herd to become rapidly inbred and inviable.  You've got fewer studs spreading their seed around.  Studs will find mares in estrus.  Some "gelded studs" (an oxymoron; what do you call "band stallions" who are no longer stallions?) will fight them off to protect mares, but behaviorally we can't assume they will continue to behave as they do in their wild, free roaming ungelded populations Congress meant to protect. — which brings me to the heart of the matter:
GELDING STALLIONS AND PUTTING THEM BACK ON THE RANGE, THEY ARE NO LONGER "WILD HORSES." "NONREPRODUCING HERDS" ARE NO LONGER WILD HORSES.   As I wrote in my comments to Wyoming BLM objecting to the Great Divide Basin Herd Roundup:
Additionally, your Alternative D, a "nonreproducing herd," should be removed from all consideration, as well as any thought of gelding large segments of the male population and returning them to the range, or surgically altering mares. This creates a zoo on the public lands. It is grossly invasive of the nature and physiology of these wild, highly social animals and in no comprehensible way meets the "minimal feasible level" of management required by law since they will no longer be "wild horses" in any recognizable sense.
When any reasonable person stops to consider, we recognize that when people go to see wild horses, we are inspired and greatly moved by their family relationships: By the activity of the stallions in winning and protecting their mares, by the devoted attention mares give to their young, and by the stallions' participation in raising their offspring.
While the grace and beauty of wild horses in the wild is moving, it is these familial relationships combined with their beauty that sets them apart from all other western wildlife species, and what BLM is proposing is utterly beyond any acceptable management practice.
Adding to that the fact that no one knows what effects these practices will have on individuals or bands or herds, Alternative D — non-reproducing herds — in any aspect should be immediately taken off the table entirely, yet BLM proposes to impose these completely alien conditions on entire wild horse populations.
These approaches are neanderthal and display a mind boggling lack of finesse and respect for the scientific process, for the nature of wild horse society, and for the law since BLM is thumbing its nose at Congress's mandate to protect their wild, free roaming populations. 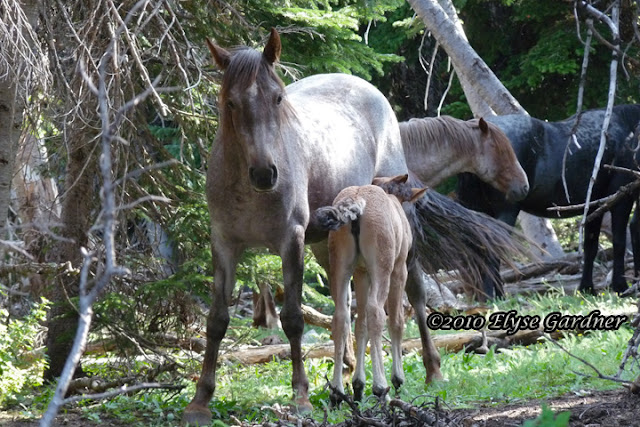 Halcyon, daughter of Red Raven and Blue Sioux (background) nurses her four-day-old daughter
To be continued...
For the wild horses remaining wild and free roaming with their humble burro friends,
Elyse Gardner

Posted by Humane Observer at 7:00 AM