THE BUREAU OF LAND MISMANAGEMENT DOES IT AGAIN, AND THEY ARE ROUNDING UP THE USUAL SUSPECTS — THE WILD HORSES, OF COURSE — AND CHASING THEM WITH HELICOPTERS IN THE HEIGHT OF FOALING SEASON.   How did it come to this? 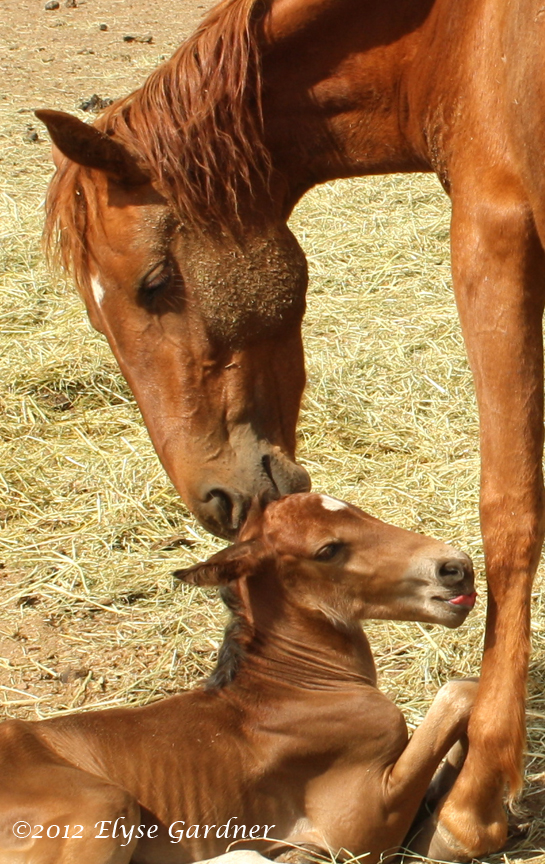 Below are the fragile, soft feet of a one-day-old mustang foal born in captivity.  Look how thin the hoof wall is, barely twice the thickness of my thumbnail. 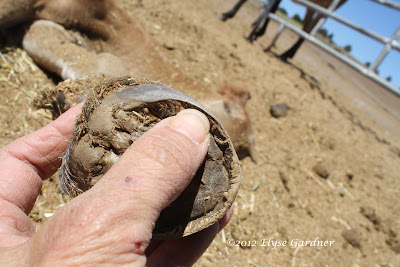 BELOW:  And the sole of this foot (the inner, flat part of the hoof), which is almost rock-hard in adult horses to withstand covering all kinds of terrain, in this youngster's foot is rubbery and pliable, similar to a large pencil eraser, and it gets worn down in the rough terrain in a like manner. 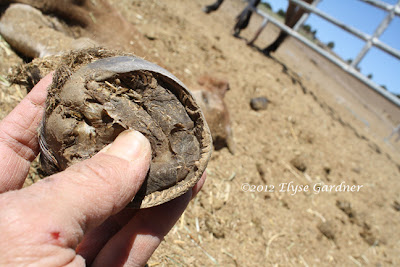 BELOW:  The same one-day-old foal's soft hind feet, with their paper-like hoof walls and rubbery soft sole.  His Maker equipped him well, but not to withstand running from a helicopter over miles of rocky ground in the first six weeks of his life. 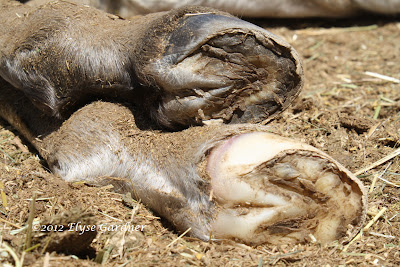 HOW DID IT COME TO THIS, where BLM is violating its own protocols to remove many horses before their scheduled roundup several weeks away, risking the lives of the very young?   — who, by the way, are not being seen in the trap, I'm told.  So where are they?
BLM FOR THE LAST FOUR YEARS has not reduced livestock grazing in this Jackson Mountain HMA as good range stewardship called for.  Thus, they have denuded the range; and let's please not forget that horses are outnumbered by cows and sheep in this area, which  is one of the few remaining legal areas designated for the wild horses and burros.
Additionally, there are serious drought conditions BLM has been monitoring in this area, and BLM began hauling water weeks ago.
But once again, it's the wild horses and burros, who are by law supposed to be considered an integral ("essential, central, core") part of the natural system of the public lands, are instead being driven off their homes in this illegal way because of BLM's own mismanagement.  And BLM boasts that the livestock permittees have voluntarily reduced their grazing.  That's great for the permittees, but it is BLM's responsibility to manage the grazing, not rely on the permittees' goodwill, which we, by the way, very much appreciate.
I say "illegal" for two reasons:  1)  BLM's own rules prohibit roundups during foaling season; 2)  Per the 1971 Act, the HMA should be managed principally, not necessarilyl exclusively, for its resident wild horses and burros.
What galls the worst is many of us agree that for the horses' safety and survival, many do need to be moved, and we have tried to work with BLM to obtain protections for the horses in the process.  A number of wild horse advocates have been in discussions with BLM head personnel in Winnemucca to discuss how to do it safely, myself included.
We urged that water trapping be used, or bait trapping.  That was refused.
So we entered discussions to try to obtain some safety for the horses now facing a helicopter roundup in the peak of foaling season.
BLM initially made the right noises about engaging more "humane" protocols — for example "monitoring" for "extreme temperatures," etc.   However, once again they have steadfastly refused to commit to actual conditions, e.g., stop flying when the temperature hits 85 F.  It is obscene, people, and I don't use that word casually.
On and on it goes.  Advocate Laura Leigh, who has been observing the roundup, lost hope in BLM as she saw foals being badly compromised and the helicopter continuing to fly despite soaring temperatures, and has filed suit to try and stop this. When Laura says to me, "Today I saw the worst run at the trap I've ever seen," I know things have got to be really serious.
I am now working with DreamCatcher Wild Horse and Burro Sanctuary.  I see these infants' feet, their fragility.  Sigh.

To get a perspective on the physical toll roundups take on horses, now let's take a look at some adult mustang feet on the same day they were rounded up.

These photos were all taken by me in the Temporary Holding pens the contractors set up for the horses after removing them from the trap pen itself.  These are photos of Freedom and his band after they were rounded up in the first Calico Complex roundup I documented in January/February of 2010. 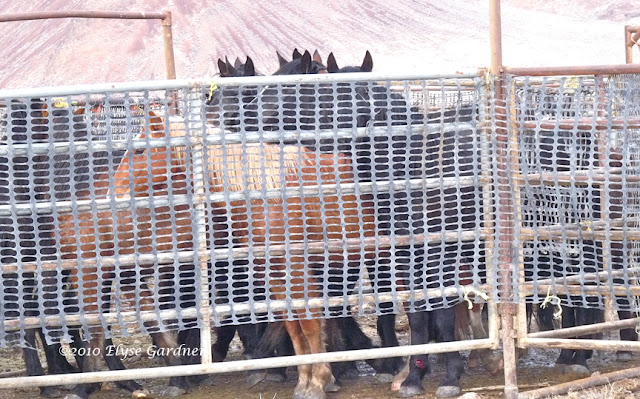 Observe how very short each hoof is.  These horses' feet have been worn way down by this exertion, a long run on rocky terrain.  I cannot fathom subjecting baby horses, whose hooves are not even hard, to this.

BELOW:  More feet of horses in Freedom's band minutes after they were rounded up: 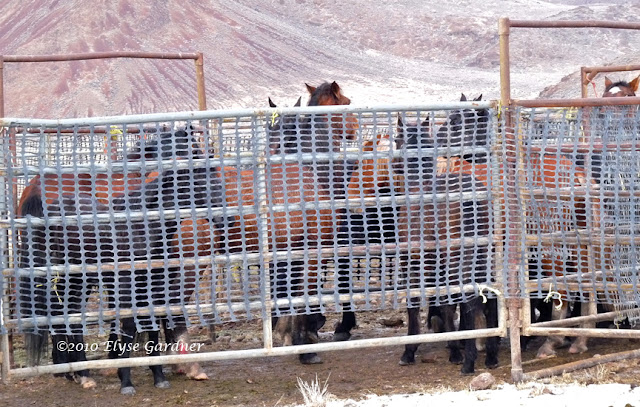 And by the way, we don't get access this close to Temporary Holding pens anymore.  This last year, 2012, it has been my experience that BLM will escort us to a trap site but then won't let us get close enough to identify individual horses well enough to know which horse to follow up on if there is a problem with a horse. If we are even allowed to visit Temporary Holding, we are kept at least 50 feet away from the horses and have a hard time seeing anything identifiable.   So BLM is giving us, the public, "access" without actually allowing us to see much; i.e., fulfilling the letter of the law without fulfilling the spirit and intent of the law.
Wild horses' feet, which vets and farriers agree are the healthiest hooves in the horse world, stay clean and trim because the natural rocky terrain keeps them filed.

But when you take these animals and chase them long distances no living predator could sustain, their feet and hooves take something of a beating, as you can see above.  This is why the BLM  regulations forbid rounding up horses or burros within six weeks of acknowledged foaling season:  the foals' feet cannot possibly sustain it, and heavily pregnant mares suffer and miscarry.  Some people have seen mares heavy with foal actually delivering their foals as they are running.  We don't ever want to see that again.

This blog wouldn't be complete without remembering Hope, the Calico foal who we saw straggling and struggling as he was chased into the trap during the 2010 Calico roundup, who lost his life because his feet were literally run off.
HUMANE OBSERVER VIEWER RATING GUIDE:  S (Sad but nothing graphic or gruesome, no blood.)
I am disgusted by the failure of BLM to put genuine numbers on the table, to make real commitments on boundaries to ensure the safety of these animals, and drop its continued "gray area" discretionary words like "monitor for extreme temperatures."
That sounds just like, "I need to eat less." "I have to cut down on my spending."  Those are easy words to say.   But the hoof meets the road, so to speak, with a specific commitment:  "I am letting go of sugar";  "I will only have one Starbucks coffee per day."  Let's get down to it, shall we?
BLM continues to promise to simply cut down on abuses,  promising what it refuses to actually deliver.  They never come up with a policy to which they can be held regarding the welfare of the wild horses and burros, preferring to leave critical, life-and-death decisions to the contractors and/or BLM people on the ground in each individual roundup.  As much as Gene Seidlitz talked a good game, I see no changes.  Whoever is responsible, the horses are run with no distance limits to be held to, no temperature limits to be held to.
It is time to define "extreme."  It is time to define these vague terms.  It's time to define specific action that is to be taken when the mercury gets to a certain level.  It's time for the courts and congress to rein in this renegade agency before they really do wipe out our stellar legacy, the wild horses and burros.
You can follow the lawsuit that's been filed by going to Wild Horse Education.  Please tell your friends and family about our nation's wild horses.  Only by more people speaking up can we save them.  I'll do my best to keep you posted.  I apologize for this blog's long silence.  I've been moving, but I have stayed involved.  I hope you will, too.

Posted by Humane Observer at 5:20 AM