Has Director of BLM Bob Abbey grown too big for his knickers, which recently appear to have been in a twist?  BLM's lack of accountability is finally getting on Congressional nerves.  Here Indiana's Representative Dan Burton speaks out about the mismanagement of the Wild Horse and Burro Program purse. Thank you, Representative Burton.
Please send a letter or postcard  to the following address to personally thank Congressman Burton:
Congressman Dan Burton2308 Rayburn House Office Building
Washington, D.C. 20515-0001


Setting the Record Straight:
HUMANE OBSERVER REBUTS TOM GOREY'S MISLEADING PR CAMPAIGN AGAINST ADVOCATES
Along similar lines, grossly misleading statements made in the press by BLM national spokesperson, Tom Gorey, I felt called for a response, which I gave as follows.
Hello Tom,

I enjoyed meeting you during the Twin Peaks roundup and hoped for good communication to ensue.  I have to say I was tremendously disappointed in you when I read this quote today.  Your exaggerated statements are so outlandish, I am compelled to add the facts to your fabrication.  Here is the quote to which I respond.


Spokesman Tom Gorey in Washington, D.C., said Pickens' plan to send those horses to her sanctuary is not a practical alternative at this time, and the agency was waiting for more details from her to determine whether it would be feasible. The BLM has a mandate under federal law to remove some horses to sustain the health of herds, rangelands and wildlife, Gorey said.

Horse herds can double in size about every four years, he added, and the BLM has determined the Antelope complex can handle 427 to 788 of the animals.

"There's nothing new in their arguments. They oppose gathers, period," Gorey said of the activists. "They say there's no need and let the population explode. Their laissez-faire management philosophy would result in cataclysm on the range, both to the range itself and the animals that depend on it."

Really, Tom, there's nothing like mischaracterizing your opposition and responding to a fiction you created just to spin your own story. You and your boss, Bob Abbey, are failing the IQ index (Integrity Quotient index), really doing a lackluster job on the integrity thing here. You and I had numerous conversations during the days we observed the Twin Peaks roundup together, and you know my position: there are situations and times when removing horses is appropriate. What is inappropriate is for "round'em up" to be BLM's primary, stock answer to every single wild horse or burro issue.

Speaking of a lack of integrity, Bob Abbey got his knickers in a twist over Madeleine Pickens' advertising campaign, and in a childish, churlish snit he flexed his borrowed muscle and threw her unique, carefully honed idea for an equine eco-sanctuary willy-nilly out the window without explanation just weeks after he stated her ideas had merit and deserved serious consideration.  Did you know he didn't even give her the courtesy of a call to inform her of his decision?  Madeleine Pickens learned of BLM's rejection of her plan when she received a call from a reporter asking for her comment on Bob Abbey's press release. Giving Ms. Pickens no opportunity or frame within which to work, BLM did not inform her of precisely what the new issues were between the time her plan "had merit" and when it became "impractical."  Such puerile behavior is alarming in one holding such high office.


What is practical about continuing to force healthy horses out of their homes even when a huge portion of the livestock AUMs aren't even being used?
What is practical about shipping all these innocents to a foreign area where they will be lucky to survive the change in diet and atmosphere and where only God knows what happens to them because you hide them all from the public?
What is practical about refusing to follow through on any of the statements about transparency and willingness to change?
What is practical about continuing to spend $2500 per horse for short-term holding when you could be spending between $475-$500 for that same horse to be living in better circumstances?  How is that not a savings?
What is practical about BLM's continuing to send horses to longterm holding, thereby engaging in a practice sure to draw more litigation in the immediate future and which one Federal judge has already said may be illegal?
What is practical about continuing these behaviors when there is a viable alternative?
Addressing again your statement, Tom:  The numbers of livestock on the wild horse and burro HMAs are shameful compared to the AMLs and AUMs given to the wild horses.  When BLM allows excess livestock on the HMAs, BLM removes the wild horses and burros and calls them excess. You never talk about that.  Instead, you mischaracterize intelligent, law abiding Americans in order to further BLM's biased agenda. I have never said I "oppose gathers, period."  That most certainly is not the position of most advocates I know.  You choose to take the most radical view you can find and classify in this narrow way all who oppose BLM's present removal practices.  I resent this and feel compelled to call you to account on it.  The chasm between advocates and BLM can only grow when BLM behaves in this shoddy, counterproductive manner.
I believe your attempts are failing to marginalize as radicals people who oppose BLM's failed, abusive management practices because we actually represent a large majority of Americans.  When given the facts, Americans find unacceptable BLM's whitewashing of the long-practiced abuses inherent in the way roundups are currently conducted, e.g., condoning the use of helicopters like giant, winged cattle prods.  Americans educated with the facts find BLM's ever-decreasing numbers and deprioritization of the wild horses and burros on their own HMAs equally troubling.
I have been putting forth recommendations to at least bring roundups into a semblance of humane practices, and BLM steadily ignores these recommendations even though some of my recommendations are now mirrored in your handpicked, pro-slaughter "credentialed equine professionals''" report.
What recommendations in anybody's reports will BLM follow?  As just a couple of examples, Dr. Eric Davis, head HSUS vet, proposed banamine be administered as part of BLM's gelding procedure.  Your "credentialed equine professionals," Dr. Temple Grandin, and I are all recommending a mounted, live video camera on all helicopters at all roundups.  Dr. Grandin and I also recommend video cameras at all holding facilities and pens.  You have summarily trounced a viable eco-sanctuary.
BLM needs reminding that as an American governmental agency, it is by the people and for the people, and begin listening to the people.  It is a public servant agency.  The horses and burros are too important to let politics and emotion ambush a potential new arena, saving money and sparing the horses the trauma of relocation to the east and, importantly, removing them forever from our view to longterm holding, probably an illegal practice which will inevitably end up in court.
A tree is known by its fruit, and BLM's fruit continues full of worms of deceit and mischaracterizations.  I had thought more of you, personally, than this.
My ultimate question to you is this:  What  good faith action will BLM take to demonstrate a sincere will behind its so-called willingness to do things differently?  Will you turn horses back onto zeroed-out ranges, and in more than just token numbers?   What action will BLM take to demonstrate its "commitment to pursuing public-private partnerships to improve its management of the symbols of the West"?
So far these are only words.  Where I come from, words spoken with no actions to follow are called lies.   Where is the action? Thousands of wild horse and burro lives hang in this imbalance.  The people are waiting to see this change BLM and President Obama speak of. So far all we see are empty words, false hopes, mischaracterizations. You continue to round horses up at alarming rates and push them with helicopters without so much as a public reprimand.  What has changed?  Not one horse has been repatriated.  A fence is up in the Pryor Mountains blocking horses from a part of their centuries-old range.  What has changed?
What say we have a public debate on the issues, Tom, on a nationally televised broadcast?  It's time to get the truth on the table.  Pick your representative(s).  I propose a panel of four people representing the wild horse advocates, and four representing the BLM.   Let the truth speak for itself.
Let me know.  I look forward to your response.
Disappointed but hopeful,
Elyse Gardner
Humane Advocate Observer
http://humaneobserver.blogspot.com


Not wanting to be bothered with the facts, in the face of all the evidence, Tom Gorey's response to me the following day was simply this:
Elyse -
I stand by what I said. - Tom


I am working hard on my next post, a revealing, moving story about the nature and lives of the wild horses.  In the meantime, I felt these things needed addressing.
To learn how you can give practical, realistic help, a voice to the wild horses and burros, you can get on all or any of the mailing lists of the organizations you see to the right on this blog format next to the "About Me" section, i.e., The Cloud Foundation, Wild Horse Preservation, and Saving America's Mustangs.  There are others, but I believe these to be the most current and effective.
As part of my closing, in an effort to memorialize these innocents who have lost their lives thanks to BLM's current practices, I will be featuring a wild horse or burro whose life has touched mine.
For now, I keep thinking of Mouse, who made such an impact on me from the first day I saw him.  Here he was a week after being gelded, still very uncomfortable as you can see by the way he is standing uncharacteristically stretched out.  He had become accustomed to seeing me every Sunday, and I cannot mistake his look of quiet reproach.  I am so sorry, Mouse.
Rounded up when only about six months old, Mouse was a quiet little guy, but he always hated captivity, which was evident in how he fought at the chute during his processing.  I was fortunate to be there to witness and film it.  My heartfelt thanks to Dean Bolstad and John Neill, who allowed me to stay a tad longer than allotted just to film Mouse because they knew he was special to me.
Mouse was found in his pen with a spinal injury on a day they were sorting horses to bring the "internet adoption" horses over to Palomino Valley, which was three weeks after I took this photo.   He was found unable to control his legs. Quiet as he was the rest of the time, Mouse did not like interactions with humans.  I think he charged the panels, agitated at the humans in his pen, and broke his back like so many are now reported doing at the roundups and at Indian Lakes holding (where Mouse was).  It must have taken tremendous determination and every effort he could muster to stay on his feet.  He was euthanized in his pen.
I am so sorry, little boy...
©4/24/10 Elyse Gardner 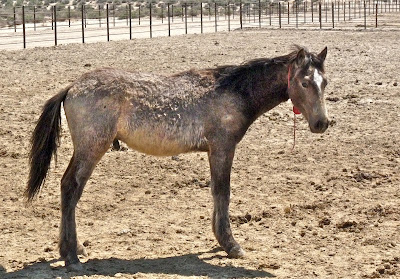 For the wild horses, captive and free, and their humble burro friends,
and in memory of all those lost, and you, precious little Mouse,
Elyse Gardner
Humane Advocate Observer
Posted by Humane Observer at 4:45 PM