FOALS AND ROUNDUPS: HOW DO THEY FARE? 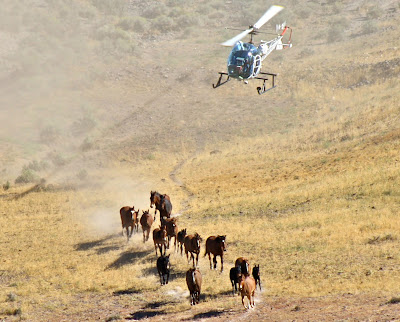 You can see the six-day-old mule foal in the back next to Mom with the blaze
BEFORE PROCEEDING, please let me ask you:

The material I document on behalf of the horses touches many people deep in the core.  The pain and outrage thousands feel on behalf of the horses is leaking out -- bursting out --  in very raw language and violent emotion in the "Comments" section of this blog.
I earnestly ask that everyone put on their adult, civilized, proud-citizen-of-this-still-amazing- country hat, and put on civility even if you don't feel it. I so appreciate your comments but any violent or threatening comments are counterproductive.
Please channel this energy by writing directly to your Congressional Representatives and Senators, as well as to our President.  Send them the link to this blog:  Tell THEM TO DO SOMETHING.  EXPRESS YOURSELF IN THE VOTING BOOTH on November 2nd. Work with me to cut off the incessant roundups through budget restrictions to make the BLM’s Wild Horse and Burro program spend our taxpayer dollars for the horse (e.g., more toward on-the-range management as intended by the 1971 Wild Free-Roaming Horse and Burro Act), not against them. (You can learn more here from the Cloud Foundation).
I have made an effort to NOT audit the comments on this blog, but I feel I will need to in order to stop what are turning into counterproductive remarks. I earnestly thank you for taking the time to comment, for expressing your love for the horses and support for my work and that of others documenting these roundups.  You all rock; just try to do it in a more civilized manner. Gratefully, Elyse
NOW FOR THE BLOG...   (PART 2 TO FOLLOW)
(As always, click on the photographs to enlarge them. 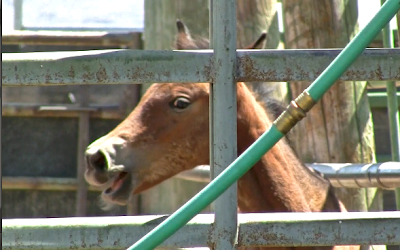 This baby in the Litchfield Corrals during  California's Twin Peaks roundup was separated from his family.  He had been without his mother -- and without food -- for at least 6 hours when I filmed this, and possibly as long as 36 hours.  I was not sure when he had arrived.  He was clearly distressed.  Watch the film below.
©2010 Elyse Gardner 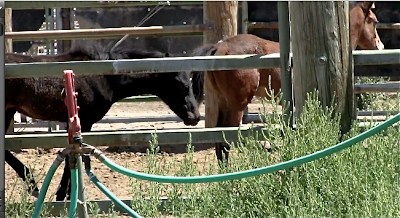 This little black filly stuck like glue to her friend, hobbling around the pen on her painful feet. You can see her holding up her sore leg here.  They were in a pen with adult mares but seemed to take no comfort from them:  they wanted their parents.  He continued to call for them.  She just quietly endured and followed very closely by his young side, a true little wild stallion and filly.

A month later (after the above video was filmed), the roundup was continuing.  I bring you the stills for now.  We film their stories and share them so that their struggles in their young lives will not be in vain -- will not be meaningless or without purpose.
©9/18/2010 Elyse Gardner 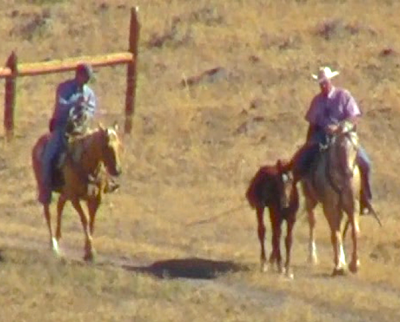 This baby I've called Little Red Warrior was roped and  brought in on 9/18/10,  the same day as the tiny, six-day-old mule foal was driven in (who was also lame and could barely walk the following day).
The thing I so dislike about the name I've given this baby, "Little Red Warrior," is that in all likelihood he was not a warrior at all; he was a baby, a young wild horse simply terrified and fighting for his life right here.  He saw the pen they wanted to put him in, and he was desperate to stay out of it.  It was evident to me, as it so often is, that this horse thought he would die if he went in that pen.  Whether it is a pen, a trailer, or a chute, whichever one it is, they aren't given a chance to understand any of this.  They are frightened and fighting for their lives, and often, with regularity, they actually lose their lives in this process.   But here, despite the stacked odds, with not one other wild horse present, adult or otherwise, he fought.
©9/18/2010 Elyse Gardner 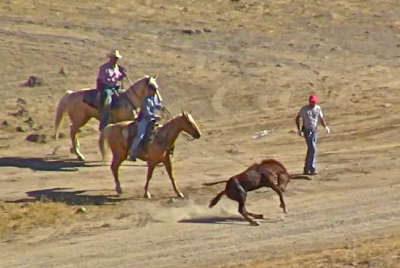 According to the Vet Report of 9/18/10, a foal brought in this afternoon was euthanized the following day, as referenced and filmed briefly in the video clip above. (I was being hurried and was not permitted to stay and film more of that injured foal in the pen.)   Might this baby be he?  He fought so hard, it is likely he was injured in this process.  The foal in the vet report suffered a serious degloving injury (big fold of skin removed like a glove) to left rear leg, and other cuts, followed by weakness, dehydration, and heart failure.
The shocking thing about that is even in that poor condition, the decision was made to transport this baby, at least a three to five-hour trip, to Fallon, Nevada's closed holding pens at Broken Arrow for further treatment.  What kind of medicine is this?  He could barely walk; forcing a seriously injured, weakened foal to endure such a trip would likely have killed him if he hadn't been euthanized before transport.  Why on earth not leave him at Litchfield, a mere hour from the temporary holding pen?   Where is this caring I keep hearing BLM and the contractors speak of?  Where?
BELOW:  This youngster I call Dignity came from a long way off,  enveloped by a wrangler close on each side.  That's Dave Cattoor on the buttermilk.  While taping, I soon realized the foal was staggering slightly, and they were keeping very close to him, making sure he stayed on his feet.  When he tried to rest for a moment, I saw Mr. Cattoor's right hand jerking upwards, yanking on the rope. I soon realized they had a rope around his neck and a rope strung between them, going under Dignity's tail, rubbing against his anus.  (This is an old cowboy method of moving them forward.)  They wanted him to keep moving, keep moving.  He was not in good shape.  Nevertheless, Dignity kicked out at the wrangler to his right at one point, "Quit crowding me."
©9/16/10 Elyse Gardner     "Dignity" trying to rest for a moment as he walks tremulously toward the pen. 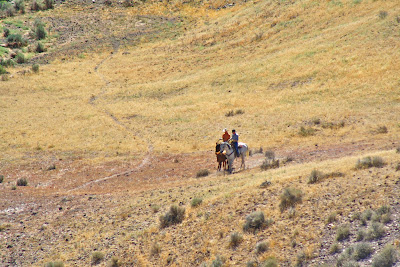 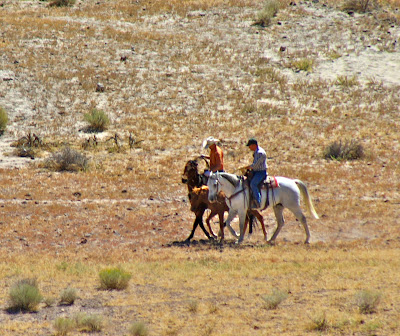 Imagine the trauma of running for miles struggling to keep up only to finally lose your family, watching them disappear from view, finding yourself alone, without any adults, for the first time in your life.
I'm not trying to be dramatic but to capture the truth of this experience:  the burning lungs, dry throat, the terrible dust from the churning hooves of all the adult horses in front of you;  the shooting pains in your feet, the final horrible moments when you give up and stop running because you haven't any more left...
Such is the experience of every foal you see roped and escorted by a wrangler.  No, a helicopter chase does not seem in any way humane for the babies. 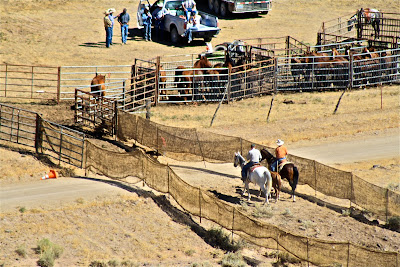 For the foals, it's always a struggle:  As much as I dislike generalizations, my experience is revealing that whether we are at the Twin Peaks roundup in northern California, the Calico roundup in the wide open mountains of Nevada, or the Pryor Mountain roundup of Cloud's famous herd, the foals' experience is pretty much the same.
In the lives and film of these foals, they tell the story of their similarly disenfranchised cousins all over the wild horse and burro Herd Management Areas who are being rounded up.
THE VIDEO of Dignity:  I decided to step it up and get the video up for you.
Looking at the Twin Peaks vet reports -- and you might want to save these reports before they are removed by BLM -- one can see the numerous instances and yet casual manner in which footsore or lame foals are addressed.  It is an expected result of the helicopter chase. (To get to the Vet Reports, click on the link above, and then scroll down the page to the bottom right.  You will see a list of dates.  Those are the vet reports according to date.
Watching these little ones struggling to keep up with mature horses mile after mile -- and yes, I have seen it mile after mile -- I know that our Congressmen and Senators would insist on a change if they really dared to watch this process.

I have more, but that is enough for anyone to have to take in in one article.  I have Sorro, and the Pryor Mountain foals...  and Hope, whose feet were literally run off (called hoof slough), and he was euthanized in tremendous pain.
Check back in the next week for Little Red Warrior's story.


Please encourage your friends and colleagues to learn more and take action by getting on the mailing lists and responding to alerts from them.  My aim is not so much to convert those who do not care (although I try to help people see the amazing individuals the horses and burros are); my aim is to motivate those who do care to take action.  You can help the horses by subscribing to these mailing lists and responding to alerts and things as they arise:
http://thecloudfoundation.org
http://WildHorsePreservation.org
http://idausa.org
http://savingamericasmustangs.org
Thank you.
Please send this blog post to your elected representatives.  They need to know what is happening.
For the wild horses, captive and free, and their humble, hardy burro friends,
Elyse Gardner
Posted by Humane Observer at 8:14 PM