CASTRATION BLUES: JUST DEAL WITH IT, and other BLM Classics 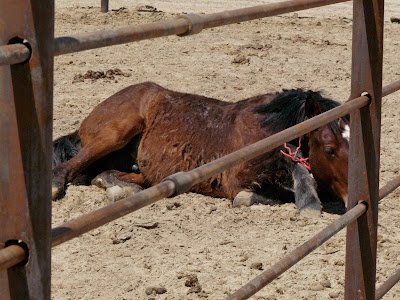 Panting, this recently gelded youngster laid there hoping the approaching
humans wouldn't hurt him.  He hurt too much to get up.  No pain management . . .
We were walking toward the pen that holds the newly castrated yearlings.  This colt, whom I've named Legacy in honor of his lost opportunity to pass on his mustang line, seemed unwilling or unable to stand despite his obvious discomfort at how close we two humans were.  Closer investigation revealed his very swollen scrotum. He was having a particularly difficult time four days after his castration.  How did he get here?

There are three drugs BLM is using for castration:  Sucostrin, Ketamine, and Rompun.
Within 30 feet, he lost control of his legs and crumpled to the ground.  Paralyzed, he could not move his head or tail or anything but his eyes, but he could still feel, see, and hear everything.  Humans descended upon him, flipped him over onto his back and tied his paralyzed legs together while he was unable to move or even scream for help or fear.   His heart pounded in his chest; he had trouble breathing.  Here it is not unreasonable for me to state: he thought he was going to die.  Maybe he wishes he had.


He is injected with the remaining two drugs, Ketamine and Rompun.  In combination they are known to sedate and block pain.  We were told that the horse is awake, at least until his legs are tied and the two remaining drugs are administered.  He is drugged, but potentially conscious.  No one seems quite certain if he is truly unconscious.  His testicles are cut away, we are told, in 8 to 10 minutes, whereupon he stands up on his own power.

Within eight minutes, it was over.  Right after he crumpled to the ground, the people came on him and, oh, the utter horror of it as he momentarily blacked out — what were they doing?  He was in a strange fog, and he hurt.
Then they were untying him.   He smelled blood!  Terrifying.  It was the worst day ever in his life.  Well, right up there with the awful day the glass monster chased him and his family out of their home.
He scrambled to his feet, but oh, it hurt. He was able to stand somehow within 11 minutes — he had no sense of time — and get away from the people.  He felt awful and weak and shaky, but he was under his own power again.  Okay, then.
But as time went on, the pain got bad.  It's been four days and it's so bad, he can't remember a time when it didn't hurt.
©4/24/10 Photo by Craig Downer 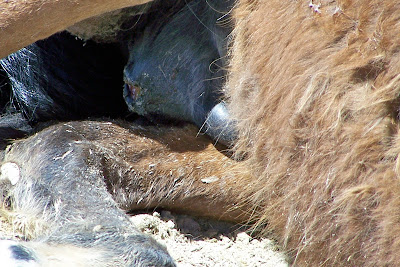 Swollen scrotal area four days post castration
BLM's policy provides no follow-up pain management even when the horses are particularly challenged, as in Legacy's case. Although Dr. Sanford stated to the HSUS vet, Dr. Eric Davis, that a case such as Legacy's should be brought back in for treatment, it wasn't done.  I pointed Legacy out to BLM staff, and nothing was done.  I was told he was "just a little stiff" when the colt didn't even want to walk.
There are those in BLM who have stated they feel I have mischaracterized the gelding scenario.  My interest is in what Legacy thinks.  As humane observer, my goal remains to give him a voice, to observe, to document his experience, to tell the people,   I believe I have done so.

Here are a couple of stills of Legacy a week after these videos were taken.  My videos are not uploaded yet (I'm having some technological difficulties this week; please bear with me).  He was with Mouse.  He walked maybe 10 feet when I saw him, and his movement was greatly improved from last week.
He and Mouse and others are still moving gingerly.
I observed the topline and unnaturally square, slightly extended stance these newly castrated horses generally assume, indicating a residual soreness.  This is to be expected, of course.  He was improved from last week.  These boys aren't jumping around and playful, but they are together and moving.
©5/2/10 Photography by Elyse Gardner   LEGACY ONE WEEK LATER 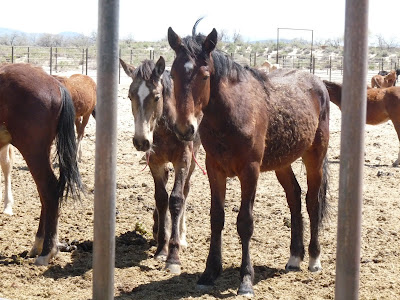 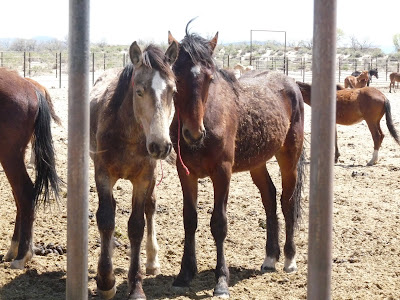 Legacy's successful healing, should he go on to be a nice, healthy boy, in no way justifies allowing an animal to go untreated when displaying clear signs of pain.   And to people who say it's not common to give horses pain medication for post- castration pain, I query: "How humane is that?  Does doing a wrong thing for many years make it right?
BLM representatives have told me that Legacy was merely stiff,  merely uncomfortable, that he wasn't in pain.  I let the video speak for itself.  You decide.
Here is an article by Vivian Grant at International Fund for Horses.  She talks about an article from  TheHorse.com.    Here is link: http://www.thehorse.com/ViewArticle.aspx?ID=1570


Complications associated with equine castrations occur commonly and should be indentified and treated properly in the field, relayed Liberty M. Getman, DVM, Dipl. ACVS, from the University of Pennsylvania's New Bolton Center. She presented "Review of castration complications: Strategies for treatment in the field" at the American Association of Equine Practitioners Convention, held Dec. 5-9 in Las Vegas, Nev.


Even though castration (removal of the testicles) is the most commonly performed surgical procedure in equine practice, it does not mean it is simple or without risk.
"Approximately one-third of all castrations develop some form of post-surgical complication, and these complications constitute the number one reason of malpractice claims against North American veterinarians," said Getman.
Postoperative castration complications that veterinarians see most often include:
"Prompt recognition of post-castration complications and expedited application of appropriate treatment is essential in all cases," concluded Getman. "Most cases can be successfully managed in the field, but some cases will require referral to an equine hospital for advanced treatment."
Details regarding field management strategies for the above-described complications were described in Getman's full-length abstract, which is available in the conference proceedings.

Posted by Humane Observer at 12:47 AM