Today we were at the Calico Range.  The trap site was right alongside a public road.  Two helicopters were again used simultaneously at times, rounding up large numbers of horses, beautiful, healthy horses.

Once again, I was not able to get close enough upon the horses' arrival to document breathing and respirations, as so many of you have asked me to do.  Other people are walking around and talking withing 20 feet of the horses as they come in.  I have called Washington and requested formal permission to have this access.  I will let you know the results.

This day stands out as particularly poignant in that all the horses, each group, was particularly loathe to load into the very large trailer they were using to transport 33 to 36 horses at once to the temporary holding facility, which was located over two miles from the trap site. 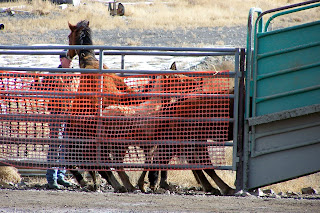 Craig Downer went to that temporary site while I remained at the actual capture site.  His photographs capture for us a sense of the horses' experience.  Less than an hour ago these horses were running for their lives.  For miles they were trying to outpace a helicopter.  Even if it went slowly, it was relentless, and they would run to simply try to get away.  Now they are enclosed, penned, often for the first time.

They have just been forced apart, separated from their families.  The mares have lost their stallions; the stallions have lost, in five minutes, the mares they spent their lives fighting so hard to get and keep.  They have all, to a one, lost their freedom.  For the moment, they are just trying to survive.  The shock and loss will hit them later, when they start calling to each other across the pens. 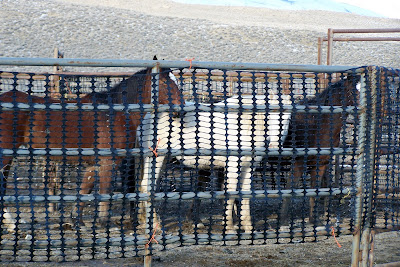 A horse's first instinct and choice is to run.  But here, they are trapped, often for the first time.   Now they are facing humans with scary noisy stickwhips, metal bars, narrow alleys, and a scary enclosure where they are convinced they will die if they enter.  No assurances or gentle coaxings await them from anyone.  It's pressure pressure pressure all the way.

More on this later, but we have learned that 15 to 20 mares have spontaneously aborted their foals in the Fallon facility since December 28.  The roundup run and subsequent stress is killing horses. 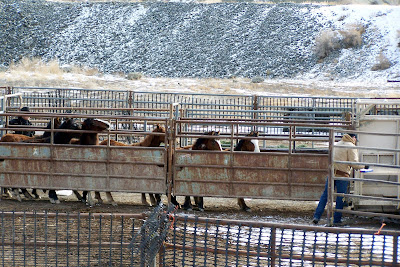 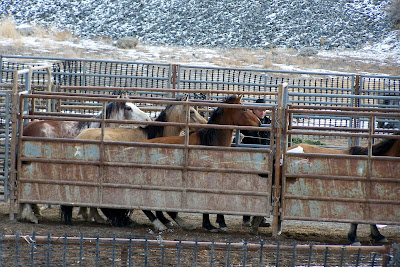 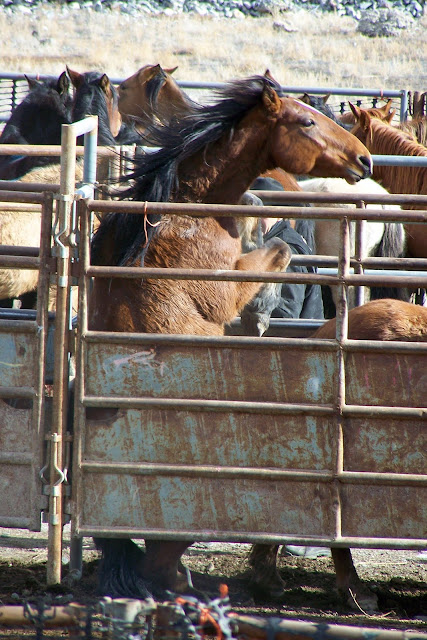 Sue Cattoor has gone back to Utah for the week and will be returning next week.  In the meantime, here is a sample of the loading issues these animals faced.  I note a big escalation today in the pressure used on these horses to make them load quickly:  it has escalated to actually striking the horses with the plastic bag-whips, smacking them on the rump, pushing their faces.  Any horses to be adopted will now have some very vivid impressions they must overcome of humans.

Future adopters, please be patient and recognize what most of your mustangs have learned so far about humans.

At the end of the day, a young black colt spent over half an hour alone in a pen.  He paced, periodically calling out, his naked little whinny left unanswered.  His mother was gone, along with his father and all the other horses.  He could see all the other horses forced into the huge trailers and driven off.

He continued to call out intermittently in hopes of an answer.  The reality is he will never feel his mother again.   If he is extremely fortunate, he may hear her or see her through a fence if they are in adjoining pens.  Maybe.  But the life he knew in the security of his band is gone.

The BLM took his mother away; she cannot answer his call.  Will YOU answer this little guy's call?

For the wild horses and their humble burro friends,
Elyse Gardner
Posted by Humane Observer at 11:07 PM