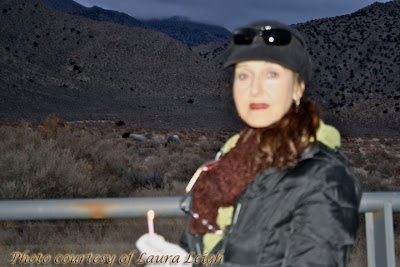 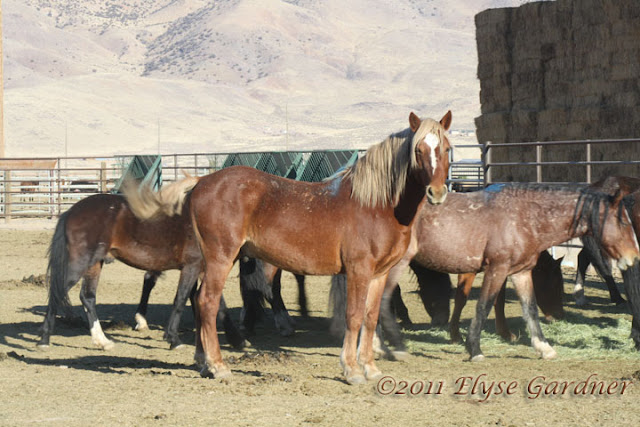 Beautiful stud captured recently in current roundup.
Back on the grueling roundup schedule
Up at 3:30 a.m. to be on the road by 4:30 a.m.,  drive to Gerlach to meet at BLM's Black Rock Station at 7 a.m. ... 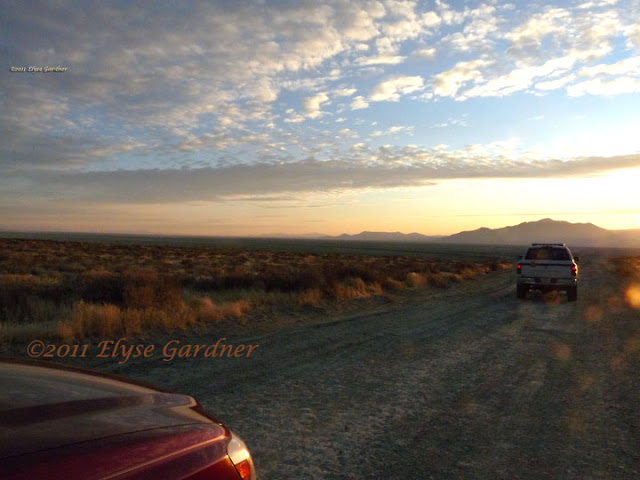 ... then drive across the surreal Playa, the salt flats, our speeding tires filling the air with toxic alkali dust... 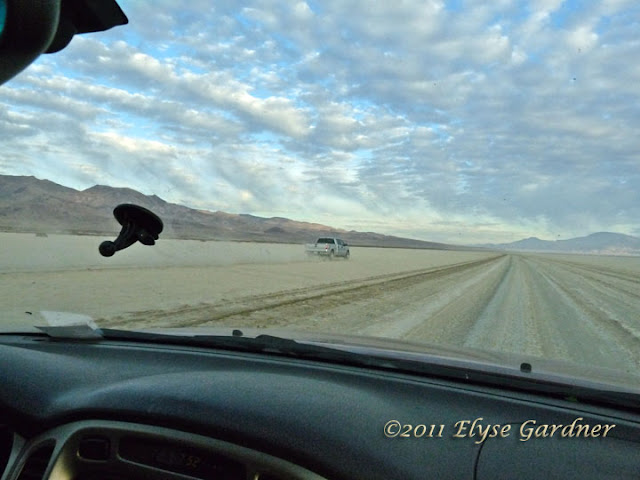 ... then bouncing through miles into the mountains on accordian/waffled, jarring gravel roads that shake my sleepy brain almost awake to finally arrive, signaled to park on the side of the dirt “road” by my pleasant BLM ranger-escort, familiar from last Calico roundup, who now feels more like a distant cousin I’ve run into at the funeral of a mutual relative.  It’s nearly 9:00 a.m. 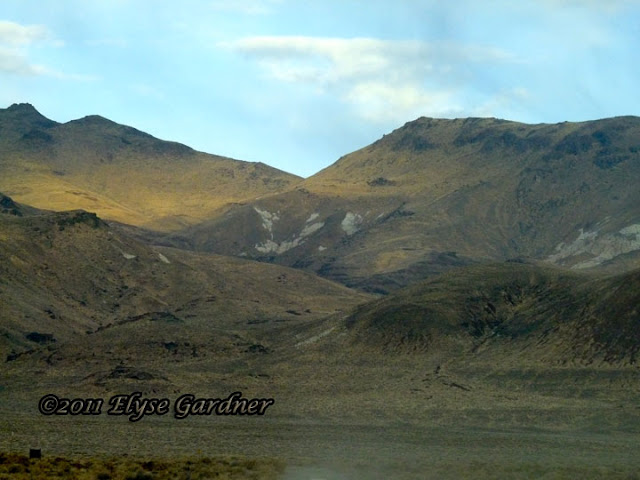 Stepping out of the car, I feel we are trespassers in the middle of the silent majesty of the wild horses’ mountain home, particularly in view of what BLM is there to do.  Some members of the silent peace patrol, the majestic guardians of the mountains — the unsuspecting wild horses — are now taking their last mouthfuls of precious free-roaming forage.  I steel myself to stay focused, prepare my gear for the hike to the designated observation place.
By the way, the little Gerlach band of wild horses BLM rounded up tell a different version of the events than BLM; it wasn't as pretty as BLM first led us to believe, i.e., "No problem; they went right in.  Piece of cake."
But this is more than enough for now.  It is Christmas, and I have another message to write to give you all, so I'm going to stop here.
I've been away from the computer with my mustang filly these few months, learning from her about mustangs in a whole new dimension, and I am profoundly moved by these individuals, more so than ever.  I've also been dealing with some medical issues and mustang matters  (not life threatening, just hampered my work) issues.  Soon I will share what the Gerlach horses told me directly, and they can tell you themselves.
I am glad for what little I am able to do, though, for these animals for whom we must never stop standing up.  They are very special, indeed.
Posted by Humane Observer at 10:30 PM 1 comment:

CHRISTMAS: WHAT IS THE GREATEST GIFT?

Merry Christmas, everyone.
What is Christmas? In honor of this significant holiday, on behalf of the wild horses, I want to step outside the box... 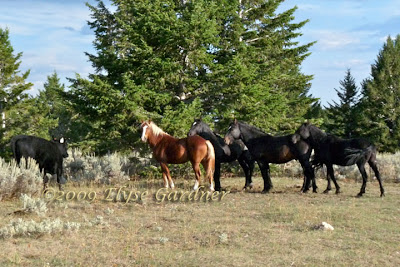 Pryor Mountains bachelor band
Whether one adheres to a Christian faith or not, the Christmas story is one which teaches that God took the initiative and reached out to offer forgiveness to his creation which is ensconced in corruption and self-centeredness and where God was largely ignored or rejected.   And the story states that at great personal, sacrificial cost, God offered forgiveness to many who didn't even know or acknowledge they'd done anything wrong.
So Christmas is really a model of humble forgiveness, of a wronged party being willing to take the initiative to mend fences with the offending party.  Hmm.
The Christian faith teaches that man is the only part of creation that requires forgiveness, but the entire creation is affected by man's relationship with his creator.  We also get a wonderful model of forgiveness in the animals, who are generally very forgiving, some more than others, willing so often to forgive and trust us again, and again....and again.
The premise is that man needs forgiveness.
I need forgiveness.   I can guarantee I will sooner or later either do or say something that will require someone's forgiveness; or someone will harm me, real or imagined, and I will hopefully become willing to forgive them.  And there is nothing sweeter than to hear my friend say, "No worries, I forgive you," and not keep beating me up with my wrong.  Likewise, offering the gift of forgiveness feels so very good to the one offering, surprisingly.  But sometimes we really have to wrestle to become willing to forgive.
So the great gift and meaning of Christmas, as I understand it, is all about the amazing issue of forgiveness.  The free, yet costly gift.  It means I give up my right to remind you of your wrongs.  It means I give up my right to discuss them with others.  It means we move forward.
We all need forgiveness, don't we?
And is there someone, or a group of someones, who needs your forgiveness?
So often we judge one another and write each other off, and that's it:  that person is a  "bigmouth"; "she is a tale-teller, a gossip"; "cheat," a "liar"; "Jake cheated me.  He borrowed money and never even called to apologize for not paying it back."  And we tell all kinds of people...more wrong done.
It's always going to be something because this is a corrupt world with imperfect people.  It helped me to learn that "Forgive"is a banking term, means a debt has been canceled and you no longer owe the bank, for instance, anything.  You expect nothing of one another anymore.   They expect nothing from you; you expect nothing from them.  It goes both ways.  Doesn't mean you love the person or institution or would do business with them again; it's just an ability to accept things as is, right now, and fluidly move on, not bringing up the old debt which has been canceled.
QUESTION:  Is it possible you might be committing a greater wrong than was done against you by your rancor and self-righteous judgement against someone who has perhaps wronged you, and for talking about it and keeping it going?
I want to challenge all of us reading this to venture to give the precious, priceless gift of forgiveness in this last week of 2011 so that we all might start 2011 moving forward for the horses, for a better world.  Or at least begin to wrestle with the issue if you are unwilling at this time.  After all, holding on to resentment is like drinking poison and expecting it to affect someone else.  Forgiveness makes room for new growth, for all kinds of good things.
Are we willing to bury old hatchets for the sake of seeing what new good thing can grow in place of all this bitter baggage we may be dragging along?  Doesn't mean we have to have a hug fest, but leaving room for a power greater than ourselves, whom I call God, to restore, and to do new things.
Just some things to think about... thanks for bearing with my diversion from my usual blog, but it is all related.  There is also a new blog post up just before this one, containing three new videos (one revisited one, actually).  I hope you will take the time to peruse it.

And now about the horses: 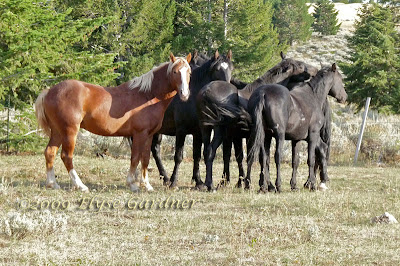 I came upon this thought provoking passage the other day in the Old Testament book of Zechariah, an Old Testament prophet, in the first chapter.
7  Upon the twenty-fourth day of the eleventh month, which is the month of Shebat, in the second year of the reign of Darius, the word of the Lord came to Zechariah son of Berechiah, the son of Iddo, the prophet. Zechariah said,
8  I saw in the night [vision] and behold, a [a]Man riding upon a red horse, and He stood among the myrtle trees that were in a low valley or bottom, and behind Him there were horses, red, bay or flame-colored, and white.
9  Then said I, O my lord, what are these? And the [b]angel who talked with me said, I will show you what these are.
10  And the Man who stood among the myrtle trees answered and said, These are they whom the Lord has sent to walk to and fro through the earth and patrol it.
11  And they answered [c]the Angel of the Lord Who stood among the myrtle trees and said, We have walked to and fro through the earth [patrolling it] and behold, all the earth sits at rest [in peaceful security].

///
Now, I don't want to make a new religion out of this passage, but I will simply say, hmmm.  It is fitting, is it not?  Whether symbolism or God has created and commissioned the horses as watchers of the earth, those who patrol and report back, these great, magnificent, peaceable creatures are like the canaries in the mines, whom the miners used to assess the conditions in the mine by lowering a canary into the mine shaft before humans descended.  If the lowered canary got sick or died, the workers knew it was toxic.
The Creator can come alongside and see, How are my horses?  What do they perceive?  How are they being treated? 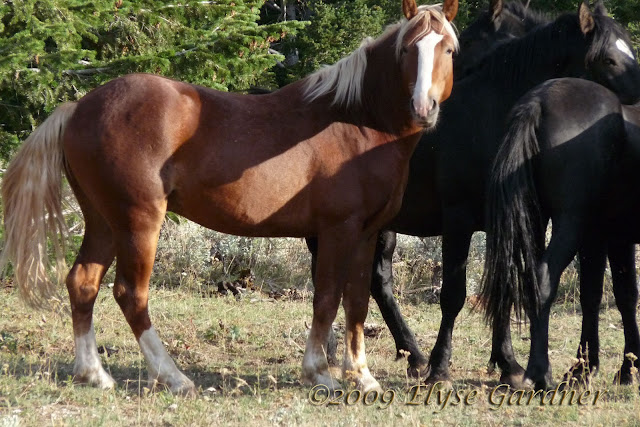 Pryor Mountain bachelor boys
Because if God ordained that horses patrol and go to and fro and report, he wants the report from their eyes, and their perspective matters to God.  Hmmm.  Something to think about...  I don't claim to understand this passage or God's entire intent.  But the passage really bears some consideration.   I do understand that whatever it means in its fullness, these animals are unique and wonderfully special and deserving of our best, of far better than the lot mankind has dealt/is dealing so many of them, and in the new year, I will be working on their behalf.  I can't begin to describe what they give me.
Just some thoughts.  Merry Christmas. 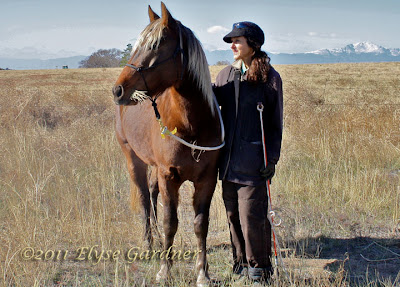 Posted by Humane Observer at 6:25 AM 3 comments: